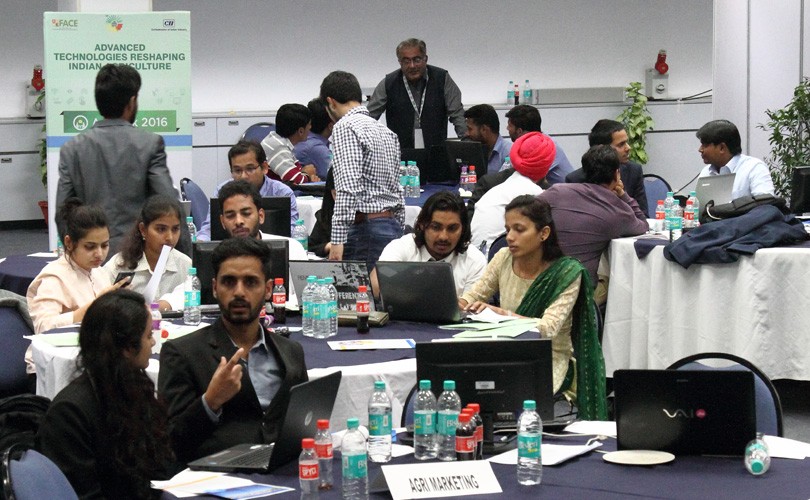 Even as the fall in arrivals at mandis and setback to winter season planting exposed rural India’s dependence on cash and its disconnect with the smartphone-based economy after high value currency notes were withdrawn from circulation, in Chandigarh agri-industry leaders were debating “Digital Pathways in Agriculture,” or how robots, artificial intelligence and information emanating from sensors, drones, satellites and machines talking to each other could increase farm yields and incomes while being minimally-invasive environmentally.

Looking back to the past, looking ahead to an internet-enabled future at CII’s agriculture fair in Chandigarh in the third week of November, 2016. Photo by Vivian Fernandes.

Technology’s virtue in itself is no guarantee of its adoption, said Richard Klapholz, the founder and CEO of Rivulus Irrigation, an Israeli drip irrigation company in which the Abhay Firodia family (Force Motors) has an equity stake. He cited the example of drip irrigation which has proven benefits. It saves water, prevents wastage of fertilizer through leaching, and minimizes pest and disease attacks by keeping humidity low. Yet its global adoption rate is just 10 percent, when it “should be 100 percent.”  Klapholz believes unlike flood irrigation where farmers can see water flowing and calibrate it by intuition, drop-by-drop irrigation confounds them in terms of when and how much to irrigate.

Klapholz believes technology can win over farmers, if it is plug and play.  It should easy to use, reliable and affordable.  Google’s GPS navigation is an example; it enables even unlettered rustics who know little more than pressing the pedal and moving the wheel to steer their way through India’s maze of urban traffic.  Klapholz himself intends to provide precise agronomic recommendations to farmers at Rs 100 an acre by analyzing satellite data. He believes such a price is possible, because satellites are passing the same spot once every five days. Their frequency would double in a year’s time and within a few years, they would be making the round every day. Satellites can also see more clearly; one pixel now equals 10 by 10 metres. What is more, the data is available at a very low price.

It is not only farmers who are confounded by technology even companies engaged with the agricultural sector are unsure how it is evolving, says Rajesh Jejurikar, President and Chief Executive of the farm equipment division of Mahindra & Mahindra (M&M).  “This is a time to pilot and try out. Not everything we try will work. We want to see how to build an end-to-end value chain which touches farmers at different points.”

Some of M&M tractors are enabled with telematics. They tell owners about engine behaviour so that driving habits and fuel usage can be modified for better efficiency. By keeping a tab on area traversed, tractor misuse can be checked. This is helpful for owners not located on the farm or those who rent out their machines.

Through another service launched in August, M&M hires out farm machinery. One of the banes of Indian agriculture, especially in Punjab, is over-capitalization of farms because of high tractor ownership that results in their under-utilization. Rental services can of course cannibalize tractor sales, which would hurt a company interested in selling more of them, but Jejurikar believes usage itself will create the desire to own. And there are high value machines that are not multi-use like rice transplanters and combine harvesters where renting would be the default option.

“Future farms will be small and smart,” says Ioanna Roussaki, Assistant Professor at Athens’ National Technical University. Though the world is moving towards precision agriculture and precision livestock rearing, based on data analytics and intelligent machines, there are several barriers to adoption, she says, like poor Internet connectivity to farms, lack of common standards for inter-operability and the fear of large corporates gaining control over farmers through ownership of data.

Roussaki says there is no reliable cost benefit analysis to convince farmers about precision farming and its environmental benefits are also not quantified.

The event organised by the Confederation of Indian Industry (CII) in the third week of November also saw start-ups displaying their products.  Soilsens makes sensors to optimise water usage by reading humidity, temperature and soil moisture.  It elicited queries from more than 600 farmers, Rajul Patkar said. She is one of four doctorate students of Indian Institute of Technology (IIT), Mumbai who has developed the sensors along with two professors, including the director of IIT, Delhi. Affordability is their calling card. The sensors cost a few thousand rupees when comparable ones are priced many times more. The sensors have been developed in-house and use solar energy. Soilsens is scouting for funds for a manufacturing facility.

Herboliv was another interesting product made of botanical extracts to repel wild animals like elephants, boars, blue bulls (nilgai) and porcupines from fields. The menace of wild animals might seem trivial, but it is not.  G V Sudarshan has developed it with the support of Tamil Nadu Agricultural University (TNAU), Coimbatore. The product is also a growth promoter. To dispel the scepticism of this correspondent, Sudarshan showed a certificate from the dean of TNAU which attests to the product increasing microbial population “significantly” in fields planted with banana, sugarcane and fodder grass crops. Gas chromatography showed the compounds were not harmful to humans and animals, the certificate said.  A video purportedly shot for TNAU shows elephants retreating from a clump of plants sprayed with the stuff. Sudarshan said he had supplied to some sugar mills in north India and the University of Kashmir had sought trials in the state’s saffron fields for its effect on porcupines.

Another innovation that caught the fancy of visitors to the agri-fair was a refrigerated van with low operating cost.  The walls of the cooling chamber are insulated from outside and are filled with a phase change material (a salt hydrate liquid) which solidifies when charged with electricity but melts slowly over 12-14 hours. The heat exchangers are proprietary.  The founder, Rajat Gupta, is an alumnus of IIT, Delhi.  The developers claim a daily running cost of Rs 180 for 18 units of electricity. This will keep a chamber, 8½ feet by 5½ feet by 6 feet, cool for 12-14 hours at a cost much lower than diesel-operated ones, S S Swamy of Thermal Energy Service Solutions said.  Tessol, in short, is no longer a start-up. It is into commercial operations with reputed chicken and fresh vegetable suppliers as clients. Swamy says it has Rs 323 lakh in orders, in

this the third year of operation. Tessol has won many awards including from Lockheed Martin, a US defence contractor, World Wildlife Fund for Nature and the German government.

But none of these three topped the list at CII’s beauty parade. Those were grabbed by Future Farms, a Bengaluru-based start-up which supplies exotic vegetables to fastidious commercial kitchens from vertical soil-less (hydroponic) farms and Agnext, a Punjab-based company that specialises in image analytics for agriculture.

A highlight of the three-day event was a “hackathon,” in which 15 teams of students from 20 universities and many locations across India participated.  They had to address the challenges of agricultural marketing, crop health, depleting soil, crop insurance and dairy farm management. All of them had developed apps prompting one of their mentors to exclaim that this was a very appy generation.

(Top photo: Students debating digital pathways in agriculture at CII’s AgHack in the third week of November, 2016 in Chandigarh. Photo by Vivian Fernandes).