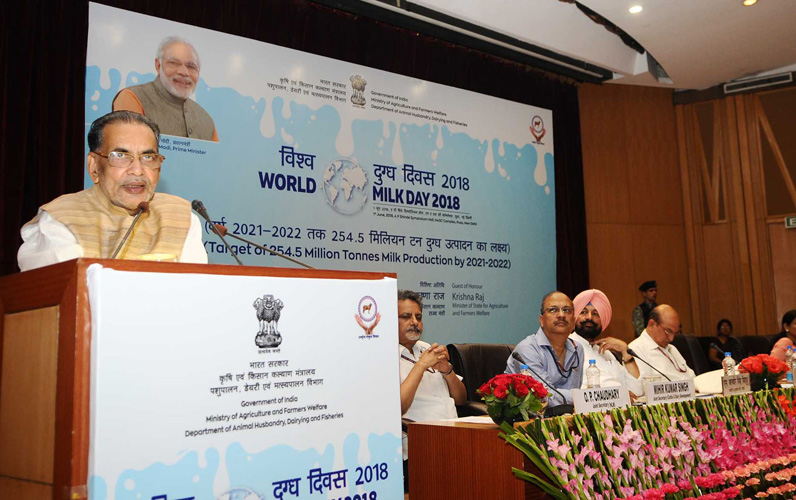 Farmers across the country want higher prices for their produce but Agiculture Minister Radha Mohan Singh is in his own orbit. He never misses a chances to gloat about production records under this watch, for which past policies are responsible and not his management of the ministry, reports Vivian Fernandes.

At a time when farmers are dumping milk on streets to protest low prices and dairy cooperatives are straining under unsold stocks of milk powder, Agriculture Minister Radha Mohan Singh was lauding his own leadership by citing production statistics while celebrating World Milk Day on 1 June in Delhi.

The minister never misses an opportunity to show that the agriculture ministry under his watch is shining when contrasted with its performance during the UPA regime. Milk production has increased by 23 percent in the four years to 2018 compared to the previous four years, he said. Annual output growth during the past four years was 6 percent compared to an average of 4 percent between 2010 and 2014.

But the street is not impressed. It is worried about excess supply.

“There is a glut situation globally. The prices of milk powder have declined sharply. Indian companies, cooperatives and companies have accumulated huge stocks of milk powder,” NDDB Chairman, Dilip Rath, told the Business Standard on May 29.

Rath wanted the government to subsidize working capital loans to cooperatives and also share storage costs. Private dairies have been asking for export subsidies.  Some have suggested that milk should be included in school mid-day meals.

Indian wholesale skim milk prices are not readily available because the market is fragmented. According to K C Supekar, Managing Director of the National Cooperative Dairy Federation of India (NCDFI), skim milk powder was being offered for Rs 136-140 a kg at the end of May. This was a sharp decline from about Rs 240 a kg last year.

Cooperatives that sell under the Amul brand have not reduced the price they pay to farmers for milk. The Maharashtra government has fixed the procurement price at Rs 27 a litre, but private dairies are reluctant to pay it.

News reports say farmers poured milk on roads in Maharashtra and Punjab on 1 June in protest against low prices. They are on a 10-day strike in response to a call given by 130 farmers’ organizations.

The situation will not improve till October, R S Sodhi, Managing Director of the Gujarat Cooperative Milk Marketing Federation told Hindu Business Line on 24 May. Though international prices are low, they are improving, he said. Skim milk powder was selling for $1,678 a tonne (Rs 1,07,593) last December.

The minister made no mention of prices in his speech in Delhi.  Instead he spoke of the diary infrastructure fund and the increased milk processing, chilling and drying capacity it would create. India produced 165 million tonnes of milk in 2016-17. The target is to nearly double the output to 300 million tonnes by 2023-24. Analysts doubt whether milk output can grow by 9.04 percent – double the annual average of 4.53 percent between 2001 and 2016.

Productivity improvement is one of the biggest challenges, the minister said. But the government’s restrictive policies on trading and slaughter of cattle do not help. Culling of unproductive and low-milk yielding cattle is necessary to improve productivity,

For ideological reasons, the minister is also obsessed with improving non-descript indigenous breeds by crossing them with indigenous elite breeds like Gir, Sahiwal and Red Sindhi. But this has not been successful in the past. Farmers prefer crosses with European dairy breeds like Jersey and Holstein Freisan, according to Naryan G Hegde, trustee of BAIF Development Research Foundation. The Pune-based NGO offers breeding services to 40 lakh farmers in 15 states.

(This article was first published in the National Herald).