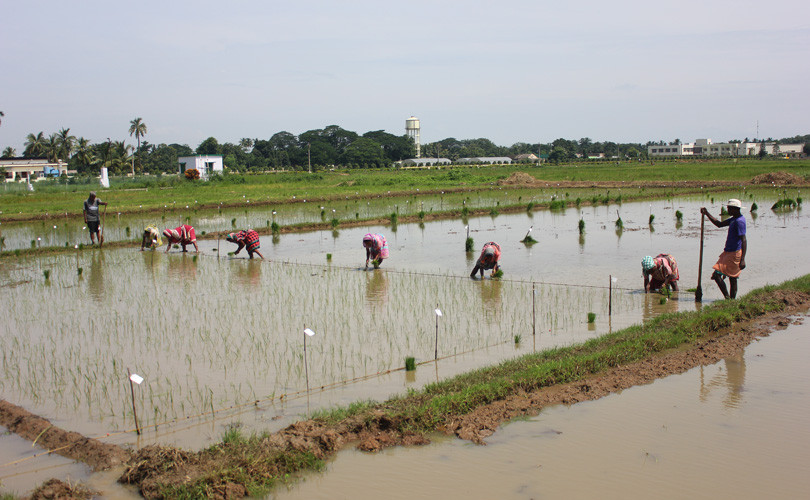 The states that grow rice to feed the rest of the country are the least suitable for it. Rice, according to Trilochan Mohapatra, Director of the Cuttack-based Central Rice Research Institute (CRRI), requires three to five thousand litres of water per kilogram.  The Food Corporation of India procured about 40 percent of its stocks from Punjab, Haryana and western Uttar Pradesh in the ten years 2013-14.

Can eastern states, which have a comparative advantage in rice cultivation, step in if north-west India were to grow less rice, or grow mostly basmati for exports? This is the aim of a programme called Bringing Green Revolution to Eastern India (BGREI).  In an interview to Vivian Fernandes in Cuttack on 14 July, 2015, Mohapatra terms BGREI as a success.  It is a qualified one. While production has risen by six to ten tonnes annually since the programme began in 2010, only West Bengal has crossed national productivity levels. The rest are some distance from it.

Apart from poor infrastructure, mainly irrigation, BGREI has to negotiate government indifference in eastern Uttar Pradesh, a slow-moving bureaucracy in Assam, West Bengal’s ekla chalo (walk alone) hauteur, and data burnishing Bihar, where CRRI officials assigned to oversee crop-cutting results have been gheraoed. Lightly edited excepts of the interview follow, but first some details about CRRI and rice in India.

The Central Rice Research Institute was set up at Cuttack in Orissa in 1946 after the Great Bengal Famine. It has hosted eminent rice breeders like Krishnaswami Ramiah. M S Swaminathan, of the green revolution fame, was a director. In the 1950s, CRRI collaborated with the Manila-based International Rice Research Institute (IRRI) for the Indica-Japonica crossing programme to improve the fertilizer response of Indian rice varieties. The crosses were distributed to various countries, and a variety called Mahsuri returned to India from Malaysia to become popular as Ponni in Tamil Nadu. Yet another collaboration with IRRI resulted in the release in 2010 of a variety called Swarna Sub 1, with a gene that helps rice regenerate even after being submerged in flash floods for about two weeks.

Puddling throws up worms and insects for cranes to feed on. Photo by Vivian Fernandes.

CRRI monitors BGREI,  a programme initiated by the Centre in 2010 with a budget outlay of Rs 400 crore. This was increased to Rs 1,000 cr subsequently. This year, because of enhanced Finance Commission devolution to states, the budget has been cut by half (and could impact the programme).

BGREI aims at raising the production and productivity of rice in seven states— Assam, West Bengal, Bihar, Odisha, Jharkhand, Chhattisgarh and eastern Uttar Pradesh— above the national average which was 2.36 tonnes per ha for the three years ending 2012-13. Only West Bengal was higher at 2.7 tonnes per ha. Bihar would have caught up except that its productivity halved in 2010-11 because of bad weather. In the others it is below two tonnes.

CRRI says simple technologies like planting in rows with spacing of 8 x 6 inches has had a significant payback in terms of yields. Conventional dense planting makes the micro-climate conducive for pests and diseases. Thinner row planting in singles reduces competition for nutrients. It also makes de-weeding easier.  Applying urea in three doses over the life of the crop instead of one; using micro-nutrients like zinc sulphate and boron; spraying only when the pest population crosses a threshold level (calculated on the basis of simple tests) are practices that BGREI is encouraging. Unlike kerchief-sized pilots during the first green revolution, the demonstrations are being held over large areas. In Cuttack district the demos were held on 4,233 ha in ten of fourteen blocks last year (1.36 lakh ha is the total paddy area of the district). This year, they are being conducted on 3,800 ha in thirteen blocks. This covers quite a large number of farmers, who own on average about a hectare each.

To induce change farmers are given one-time free seed, fertilizer and a small amount of cash to pay for wages.  Entitlement is by rotation. Subsidy is also provided on manual de-weeders (Rs 1,200) and mechanical transplanters (Rs 120,000). A cemented threshing and drying platform is provided in every cluster of villages; deep bore wells and shallow tube wells are also sunk.

Rice is India’s biggest crop; it is grown in all states, over 43 million ha. Provision of quality seed can lift productivity by about a fifth. But against a requirement of two million tonnes of certified seed,  India produced only 690,000 tonnes at last count. The all India seed replacement ratio for paddy is about 40 percent. In Odisha, it is 22 percent. This is representative of the eastern states.

Question: Based on the results of BGREI can you pronounce it a success?

TM: BGREI is a success. It has given us six to ten million tonnes of more production in seven eastern states as compared to the average of three years prior to BGREI. And this is an indicator of the success of BGREI.

What more can be done? We find that West Bengal has average productivity that is a little above the national average but the rest of the eastern states are lagging.

The state wise variation is quite large.  One of the reasons is the kind of adversities they face. And the kind of infrastructure they have. In Jharkhand, there is little irrigation coverage. It is a harsh environment. In Orissa, the rain-fed ecology is predominant. In eastern UP, flash floods are almost regular. To bring them at par we will have to improve the infrastructure, irrigation in particular, and also introduce more climate-resilient technologies This programme has brought quite a bit of change.

What is so different about BGREI? The first green revolution was brought about by the public research and extension system. That extension system is broken in many states.

This programme has brought about convergence. We have the central government’s department of agriculture and cooperation involved in planning and monitoring. State agriculture departments are engaged in implementation. Research institutions like CRRI and state agricultural universities do technology backstopping and monitoring. Some states have involved non-governmental organisations. We have roped in Agricultural Technology Management Agencies (ATMA) too.

The other important component of this programme is large-scale demonstrations. The technology demonstrated in large areas is visually so effective that the farmers accept them immediately,

Incentives are important. People will not grow more if they cannot sell. Has the procurement aspect been taken care of?

This particular programme supports some aspect of post-harvest management.

Sir,  I am not talking of the programme…

The marketing component is only briefly addressed in this programme in terms of providing storage facilities and some aspect of harvesting.

In our conversation earlier, you said we need a rice policy. Why?

Rice policy we need for this country because we must know how much rice we must produce for our own requirement and for exports, in which region and ecology. We must also take into account the nutritional requirements because we are largely rice eaters. If we keep releasing varieties that are not as per nutritional requirements we will be doing a disservice. The rice policy should define what we want in terms of quantity, quality, area and the regions where rice should be grown.

Does it also mean specifying regions where it should not be grown?

Yes, the regions where water is plenty, where rainfall is plenty these are the regions where rice should be cultivated and promoted because it takes 3,000 to 5,000 litres of water to produce a kg of (ordinary) rice.  Growing rice in areas where there is water deficiency and lifting of too much of underground water will lead to problems.

Are the eastern states in a position to meet the rice requirement of the country?

The eastern states can take over given the support and policy framework if market and procurement issues are resolved. I believe strongly that eastern states should feed the whole country and also export.

(Top photo: row planting of rice at CRRI, Cuttack, on 16 July,2015. Photo by Vivian Fernandes. As usual men do the heavy lifting!)