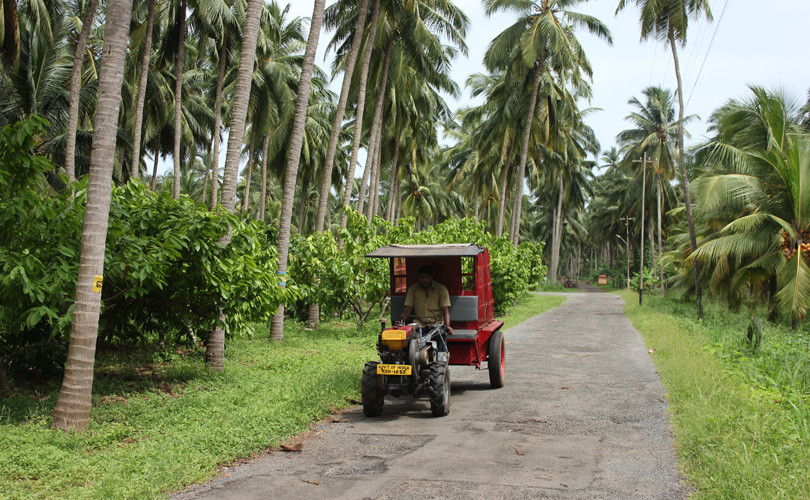 Mangaloreans who would have given a limb than see a coconut palm cut are mowing them down to make way for yet more apartments for which there are few takers. Over the past decade area under coconut has grown glacially at 0.3 percent a year to 2.07 million ha in 2013-14, says the Coconut Development Board. It is not construction but competition from palm oil that is affecting the expansion of the coconut crop. In a conversation with Vivian Fernandes, the director of the Central Plantation Crops Research Institute in Kasargod explains why and how the coconut economy can be sustained for the same of smallholders who depend on it. This article was first published on www.firstpost.com. (see link below).

‘Upar ki kamayi,’ is one of the attractions of a government job for those who believe public service is a privilege that must reflect opportunity cost. For them salary is for saving and the ‘extra income’ is for spending. It is a flippant analogy that applies to coconut gardens as well, where the ‘side’ income from crops grown between palms can far exceed that from nuts if farmers stop being agriculturally monogamous and adopt coconut-based farming systems.
Ironically, in  a country where cooking oil is the number one food import item with a tab  of $9.34 billion in 2013-14, the supply of coconut oil exceeds demand keeping prices down because the market is flush with competing and cheaper palm oil.  Between 2000 and 2012, worldwide production of cooking oil rose 72 percent; that of palm oil increasing the most at 141 percent, followed by soyabean oil and rapeseed oil. But the output of coconut oil declined by a little over one percent.

Import duties were raised to 7.5 percent and 15 percent for crude and refined palm oil respectively last December from 2.5 percent and ten percent earlier as global prices of edible oil have fallen. But they have had a damping effect on coconut oil. In 2013-14, corpra (from which coconut oil is extracted) prices were below the floor fixed by the government, as procurement by Nafed did little to move market prices. The agency lacks storage facilities, and procurement is limited to just ninety days.

P Chowdappa is worried about the future of coconut groves.

If this trend continues, ‘we are worried about the future,’ says P Chowdappa, director of the Central Plantation Crops Research Institute in Kerala’s coastal district of Kasargod, across the Karnataka border. The institute founded in 1916, was taken over by the government in 1969, when trade-financed commodity boards were abolished. The research centres it had spawned for spices, cashew, oil palm and coastal agriculture have been hived off into independent institutes and directorates; CPCRI focuses on research in coconut, arecanut and cocoa.

Though India’ share of the world’s coconut acreage is seventeen percent, it produces 32 percent of the world’s 73 billion nuts because productivity per hectare is two and half times more than the next big producers – Indonesia and the Philippines. To secure the future of ten million coconut growers, most of them small holders in Tamil Nadu, Kerala and Karnataka, who produced eighty percent of the country’s output of 23.35 billion nuts n 2012-13, it is vital that coconut finds added-value uses.

Cold-pressed extra virgin coconut oil is one spin-off plugged at the beauty and health conscious for its high lauric acid content ─ ‘next to mother’s milk’ says Chowdappa – which sells for double the price of the plain vanilla variety.

Neera, or the sap of the inflorescence, is another income booster. Being rich in vitamins, anti-oxidants and blood pressure-lowering potassium it is peddled as a nutritious drink. Chowdappa says it has more sugar than cane and must be kept refrigerated so it does not ferment into toddy, an alcoholic drink. It took some persuasion for the Kerala government to revise it excise policy in 2014 and allow sale of neera as a non-alcoholic beverage in the state. More work will have to go into neera processing to extend its shelf life, so it can be bottled and mass marketed.

Growers who wish to avoid the rigmarole, plant dwarfs for tender nuts which are increasingly sought after as natural thirst-quenchers. CPCRI has developed three varieties of them using the dwarfing gene of a variety found in Hirehalli of Karnataka’s Tumkur district in the 1960s. State agriculture universities have added to the list with their own versions.  Coconut palms are generally towering,  rising up to a hundred feet and go by names like west coast, east coast, Tiptur, Gangabondam and Benaulim with the suffix ‘tall’ added to them.

Dwarf varieties are forced upon growers as there is a dearth of climbers. Sheer physical effort and the fear factor discourage people from taking up the vocation. Farmers individually are at the mercy of climbers. A member of a farmer producer company (FPC) in Coimbatore said they were spared the indignity of having to plead with climbers after banding together. Climbers would charge ninety paise per nut but after the FPC assured them regular work, they have brought down the rate to seventy paise.

Few recruits for this vocation. Palm climbers at Thondamuttur in Coimbatore.

Mechanical climbing aids have not been very successful; the most popular is the one developed by a Kerala farmer called Chamberi Joseph and is named after him. Fully mechanical ones will be a great help not only for plucking but also for spraying.

Since  palms are planted in grids of 7.5 metres by 10 metres ─ 177 per hectare ─  there is ample room for other crops like pepper, betel, areca nut, banana and pineapple, the mix varying with regions. While a coconut-only farms yield about Rs 40,000 a hectare, with multiple crops the income can be ten times as much.  The farms, of course, will need irrigation and close supervision.

Among the promising inter-crops is cocoa. At 15,000 tonnes, India has just 0.3 percent of the world’s share. It is grown mainly in Kerala, Karnataka, Tamil Nadu and Andhra Pradesh. India’s person annual consumption of cocoa is 40 grams but growing. Demand for cocoa exceeds supply. Prices are volatile as they are yoked to the international market. Farmers came to grief in last decade when prices slumped.

‘Cocoa was selling for six rupee a kg, so we uprooted it,’ says K Kanakraj, 43, of village Semmedu in Coimbatore district. ‘Now it is selling for Rs 200 a kg of bean.’

Cadbury India (now Mondolez India) and Campco, a Mangaluru-based cooperative, are the main buyers of cocoa. Demand exceeds supply. CPCRI has recommended contract farming under tripartite agreements with the government being a party, so that farmers are not left in the lurch should global prices fall.

‘India can become a global leader in cocoa production without additional investment in land,’ says Chowdappa.  India’s productivity is higher than the international average. ‘Our quality is on par with that of Ghana,’ he says.

This could well happen. Bananas are an example. If the district of Jalgaon in Maharashtra were a state it would rank fifth in India in banana production. All because of a company called Jain Irrigation which introduced a variety called Grande Naine in the 1990s, supplied tissue cultured saplings and trained farmers in drip irrigation and fertigation.

The integration of private corporate buyers and research institutes with farmers can bring about a similar change in cocoa cultivation as well. That ‘upar ki kamayi’ will be the fruit of enterprise worth aspiring for.

(Top photo: Cocoa between palms at CPCRI’s farm in Kasargod. Photo by Vivian Fernandes on 14 August, 2015)