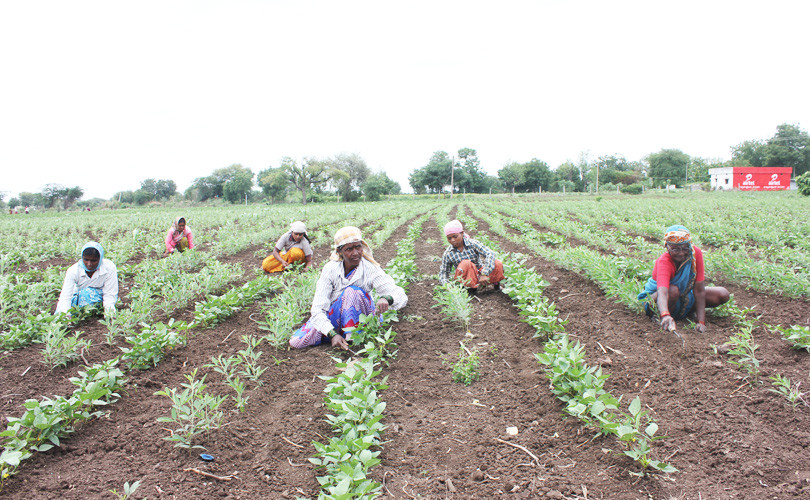 C L Lakshmipathi Gowda retired as deputy director-general of Hyderabad-based Icrisat, or International Crops Research Institute for the Semi- Arid Tropics, in January 2015. He had joined the institute forty years ago, in 1975, as a chickpea breeder. He lives in Mysore, his home town.
Chickpea (Bengal gram or chana) is India’s largest consumed pulse, accounting for two-thirds of the global production. According to the agriculture ministry, 10.22 million hectares was under chickpea in 2013-14, a little short of the1959-60’s peak of 10.33 million ha. Production at 9.88 million tonnes was 51 percent of the country’s total pulses production of 19.27 million tonnes ─ itself a record. Productivity of chana crossed the one tonne mark (1,037 kg a ha) the previous year. Chickpea output has nearly doubled in the past ten years.
Of the about two hundred varieties of chickpea released globally, Gowda says he jointly contributed to seventy varieties in thirty two countries.
Pigeonpea is another dal that is mainly produced in India: 3.29 million tonnes in 2013-14 against the world production of 4.75 million tonnes. Prices of late have touched Rs 7,500 a quintal, the highest ever.
Pulses provide Indian vegetarians with much of their protein. As incomes rise, consumption of energy rich cereals decreases and that of proteins like pulses increases. But India has seen a decline in per person availability over the decades. Despite rising production, India has had to import; the tab (net of exports) in 2013-14 was Rs 8,813 crore for 2.7 million tonnes. Rising prices of pulses have contributed to inflation, causing disaffection against governments.
Smartindianagriculture’s Vivian Fernandes caught up with Gowda in the Icrisat campus on 27 July, while he was on a visit to Hyderabad. Here are edited excerpts of the interview.

Question: The lack of productivity-improving technological developments is held responsible for the shortage of pulses.

CLLG:  The technologies, good varieties and agronomic practices are available. It is a question of implementing these technologies in the farmers’ fields. With good effort we can increase yield by at least 50 percent, if not 100 percent.

Would you blame the agricultural extension system for the inadequacy?

The agricultural extension department, the department of agriculture, state agriculture universities, ICAR (Indian Council of Agricultural Research) and the National Food Security Mission ─ we all need to work together. The effort now is un-coordinated and haphazard.

There has been a lot of progress in chickpea production. What is the scope for more?

Chickpea has shown rapid increase in per hectare production. Breeders were able to develop good varieties. There were efforts at multiplying the seed and providing them to farmers. Except in some parts of north India, we have good varieties in central and peninsular India. Good management practices have been adopted by farmers. Yield has increased tremendously in both kabuli (big seeded) and desi varieties.

We are trying to improve yields and developing varieties that are amenable to mechanical harvesting because labour is not available and it is costly.  In the next two years, the all India programme will be able to release two or three varieties that can be harvested by machines.

We are also developing varieties that are herbicide tolerant, so farmers can use weedicides without killing chickpea plants. I am not talking about GM (genetic modification) technology here. We have used naturally-occurring weedicide germplasm to develop them.  (Monsanto has herbicide tolerant maize, genetically modified not to succumb to glyphosate, a weedicide – editor).

But the major problem is the pod borer. We do not have good available resistance in local varieties and have to depend on genetic modification. This is where Bt chickpea or Bt pigeonpea are going to be of help but scientists are constrained because we cannot do field-level trials. There is a moratorium but if Bt chickpea and Bt pigeonpea were allowed, that will be the biggest revolution.  [(a)Bt refers to a gene derived from a soil bacterium which is toxic to pod borers. It is the same as the one used in Bt cotton seed. (b) There is no moratorium on GM field trials; state governments have to give a no objection certificate, which they often do not. Five states allow field trials; one of them has recently suspended them. – Editor}

Do pod borers cause a lot of damage?

Yes, in pigeon pea the damage can be 50 to 60 percent. In case of chick pea, because it is a short season crop, the damage could be between 30 to 50 percent. We can avoid the loss, and chemical sprays which are injurious to health and the environment.

The pulses research station at Kalaburagi (Gulbarga) in Karnataka has released a variety of chickpea which is machine harvestable.

Yes, they have a variety which they have submitted for release.  I was involved with that programme for the last four-five years, I have seen it working in the field, but the state varietal committee has not met to officially stamp that yes it can be released. There is another variety in Andhra Pradesh which is also ready for release.

There is so much negative perception about Bt technology. Should you not as scientists do more advocacy and convince the decision makers, get political opinion in favour?

We are doing but maybe we must do a little more. We have organized several workshops where we have called media persons who write about this and we are also working with ICAR and the agricultural universities to provide as much data and information so that the policy can be influenced. As an international institute, Icrisat, can only do this much. We work with the national programme, with ICAR and together we can definitely influence the government to lift the moratorium on GM testing.

In the case of pigeonpea, a paper which you had jointly written, says 2,500 kg is the yield potential but we do about a thousand kg.

The current average yield of pigeonpea is only 700 kg, which has been the average for the past forty years. (It was (762 kg per ha for the three years ending 2013-14 – editor). We have not really been able to break that barrier. We now have hybrids which can give between 2,500 kg to 3,000 kg per ha. But the seed system should be streamlined so farmers get the seed. Hybrids can give 35 percent to 40 percent more yield than (open pollinating) varieties.

Hybrids are input intensive. Since pigeonpea is grown by small holders in rain fed areas with poor soils, can they afford it?

These hybrids have been tested under varied conditions in shallow black, medium black and even deep black soils. The advantage of hybrids over varieties has been reasonably consistent. In very dry areas we may get slightly lower advantage say, 30 percent, but if the soils are better we may get 45 to 50 percent more.  They are drought tolerant because they grow fast and put very deep roots.

How long do they take to mature?

They are medium duration ones of 150-165 days which can be grown in medium black soils of Maharashtra, parts of Andhra Pradesh and northern Karnataka. They can be grown very profitably but the major problem remains the pod borer.

Private seed companies are not interested in pulses because they are varieties, whose seeds farmers can save and re-use. But hybrid seeds have to be bought every year. We have seen what the private sector has done with Bt cotton hybrids. In thirteen years, 95 percent of the cotton area is Bt hybrid.  Why not tap its drive to popularize hybrid pigeonpea?

We (by which Gowda means Icrisat – editor) are involving the private sector seed companies to some extent. There are five or six companies that have shown interest and even for them pigeonpea hybrids are a new thing. They are also learning how to make the hybrids. Hybrid pigeonpea seed cannot be produced everywhere. It needs good population of honeybees which cross pollinate them. May be it is a question of time before other private sector companies come forward. But there are some issues that need to be ironed before this can pick up. (The government is the biggest buyer of seed and it buys on the basis of lowest prices. Often, dishonest seed companies win the tenders in collusion with officials. Companies with reputations to protect cannot compete against them on price – editor)

The number of countries that are now importing chickpea has increased five-fold over the past few decades. Instead of merely seeking to bridge the domestic deficit should we not aim at exports as well?

It is possible because the technology and all the other paraphernalia is available. It is just a question of political will and support from the government. A mindset change of farmers is required. They must consider pulses as a major crop and not a secondary crop. I have also suggested that the government of India create a national pulses mission headed by a senior IAS officer who can coordinate all the efforts and money that is being spent and take the states along to see that pulses production can be increased.

(Top photo: Women in Gulbarga removing weeds from a field of pigeonpea inter-cropped with moongbean. Photo by Vivian Fernandes on 26 July, 2015)