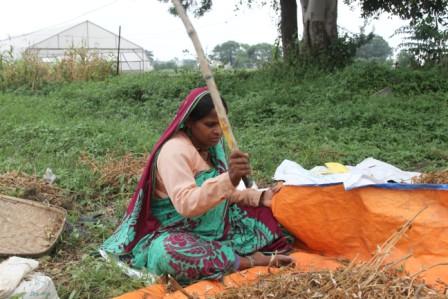 Import duties on cooking oil have been raised four times since last August. But without productivity increases, cooking oil self-sufficiency will not be possible or sustainable. New technology, including GM technology, should be adopted and yield gaps should be bridged, reports Vivian Fernandes.

Though the Solvent Extractors Association (SEA) “lobbied very strongly” with ministers and officials and got import duties on edible oils hiked four times since August, it believes enhanced productivity in oilseeds is vital to steady the ship of the cooking oil industry.

The import duty on crude palm oil including education cess has tripled from 15.5 percent to 48.4 percent between August and June. That on refined, bleached and deodorized palmolein, and palm oil has doubled from nearly 26 percent to a tad less than 60 percent during this period. The duty on crude soybean oil is 38.5 percent from 18 percent a year ago. The tariff on crude sunflower oil has risen from 13 percent to 38.5 percent.  The duty on refined oils – soybean, sunflower and rapeseed – is now nearly 50 percent from a little over 20 percent a year ago.  Both crude and refined cottonseed oil which could be imported duty-free a year ago, now bear a levy of 38.5 percent and 49.5 percent respectively.  These are the highest levels of import duties on edible oils in a decade, says news agency Reuters.

Support for protection has come from NITI Aayog member Ramesh Chand. In an article in the Business Standard, he said while the Green Revolution created self-sufficiency and more in cereals, it has bypassed the oilseeds sector. India’s import dependency in cooking oil has increased. From less than 5 percent of domestic consumption in the early 1990s, the share of imports is now 66 percent, he laments. India is the biggest edible oil importer shelling out about $10 billion a year to buy 14 million tonnes from overseas.

Chand blames liberalized imports after the 1991 trade reforms for this situation. He attributes the change in import stance to “some experts (who) produced analysis that India has a comparative advantage in increasing production and export of cereal instead of oilseed, and it was more efficient to meet edible oil demand from imports.”  Persuaded by this logic, the government slashed import duty on palm oil from 65 percent in 1994-95 to 25 percent in 1996-97 and 15 percent the next year, he says, though it could charge up to 300 percent according to India’s commitment to the World Trade Organisation (WTO).   In fact, the United Progressive Alliance (UPA) government of Manmohan Singh went further. It reduced the import duty on crude and refined palm oil to zero and 7.5 percent respectively in 2008. Global cereal and edible oil prices had spiked in tandem with crude oil prices owing to a diversion of corn and palm oil to produce biofuels.

The analysis that Chand refers to was published in March 1996 in the Economic and Political Weekly by agricultural economist Ashok Gulati along with Anil Sharma and Deepali S Kohli. In ‘Self-Sufficiency and Allocative Efficiency: Case of Edible Oils,” they put the 1986 Technology Mission on Oilseeds (TMO) under scrutiny. The aim of the mission was to achieve self-sufficiency in oilseeds by 1990. Since consumption of cooking oil grows as incomes rise, imports had risen steadily since 1976-77, they said. By the early 1980s, the country was importing a third of its requirement, which could not be sustained owing to the shortage of hard currency.

Chand declares the policy adopted by the Rajiv Gandhi government to achieve self-sufficiency as successful. In just six years, he says, production of oilseeds increased by 78 percent or nearly 9 million tonnes a year and imports fell from close to 2 million tonnes in the year following the launch of the mission to 0.1 million tonnes in 1992-93.

But this self-sufficiency was achieved at a cost. Only the State Trading Corporation could import cooking oil. Duties were raised to 85 percent. The National Dairy Development Board (NDDB) was charged with giving price support to farmers by keeping the wholesale prices of cooking oil within a range of Rs 20 and 25 a kg. NDDB launched Operation Dhara and influenced retail prices though buffer stocks and market intervention. (It continues to retail Dhara brand cooking oil).  It made losses in the process and was allowed to recoup them up through the import of cooking oil at a special, concessional rate of duty.

Under the 1986 National Oilseed Development Project, priority was given to the cultivation of four oilseeds – groundnut, rapeseed-mustard, sunflower and soybean. The project was launched in select districts of 12 states. Apart from price support, farmers were given subsidized seed and credit. The project was later extended to 180 districts in 17 states.

Gulati and his team attributed 53 percent of the increase in oilseeds production to area expansion, mainly to irrigated land. Only a third of the output increase was due to yield enhancement, they said. The highest yield increase was in groundnut. The yield of soybean, sunflower and rape-seed mustard increased by about 20 percent. The area was diverted from cereals like jowar and pulses.

Chand believes the cheap supply of cooking oil created demand. If there was a lid on imports, cooking oil consumption would have been flat like that of cereals. That may not be true. As incomes rise, people tend to consume more of protein (pulses, milk, eggs, and meat) and fat and less of carbohydrates or cereals. Siraj Chaudhry, Chairman of Cargill India, which is a large global agri-commodities trader that produces and retails cooking oil, says much of the new demand is institutional: from restaurants and the snack food industry.

Chand would like to think that Indian oilseed producers may not be inefficient as they are able to compete on exports of oil meal, which is used as animal feed. It is true that the yield of oilseeds has improved since the technology mission was launched. That of soybean has risen from 755 kg per hectare to 1,060 kg/ha. Groundnut yield has grown from 852 kg/ha to 1,394 kg/ha (kharif). That of rapeseed-mustard has increased from 706 kg/ha to 1,193 kg/ha.

These yields compare poorly with those of the major oil exporters. Canada’s rapeseed yield is 2.39 tonnes/ha and that of EU’s 3.14 tonnes/ha (though their crops are of longer duration). Soybean yield in Argentina, Brazil and the United States is around three tonnes per hectare. V.S. Bhatia, Director of the Indore-based Soybean Indian Institute of Soybean Research says India’s soybean crop is of 90 days while that of the Americas is 140-150 days.  Still, the scale is vastly different and India is at a cost disadvantage.

Chand also brings in health aspects to buttress his case for higher import duties. He says palm oil is unhealthy compared to the oils which Indians traditionally consumed. But oil palm yields 4-5 tonnes of oil per hectare and is affordable to the poor. This is the reason why India is promoting its cultivation.

Chaudhry says given India’s low yield, it would require tremendous area expansion to create self-sufficiency in cooking oil. Disposing of the oil cake and meal would be problematic because India is not a predominantly meat-eating country. But Dinesh T Bhosale, Regional Sales Director of A.B.Vista South Asia, an animal nutrition company, says animal feed demand will double by 2025.

Chaudhry says his stance has changed from the TMO days when he was engaged with STC in oil imports. Being a large consumer, Indian cannot depend on oil imports. It must support a local oil- crushing and refining industry to insulate itself from external shocks like that of 2008. That will also encourage farmers in dryland areas to cultivate oilseeds.

Siraj Hussain, the former agriculture secretary, says the landed cost of edible oil should not be below the minimum support prices (MSP). But if MSP is cost plus 50 percent (the latest government policy), it will encourage inefficiency.  MSPs cannot ignore global price trends.

Import duties must be dynamic and set at a level that protects the more efficient domestic producers. Oilseeds (and pulses) are also socially-useful crops. They enrich the soil with atmospheric nitrogen and reduce dependence on imported ─ and subsidized ─ urea. They also need less water.  Oilseed farmers must be compensated for these environmental services.  A per hectare fixed payment, like that of Telangana (Rs 4,000 per acre, per season) would be ideal.

Salvation lies in technology. Sadly, for ideological reasons, both the BJP and Congress-led governments have not permitted genetically-modified (GM) food crops to be cultivated. Insect-resistant soybean would save the harvest that is eaten by borers. Herbicide tolerance would reduce weeding costs. Chand is silent on high-yielding GM mustard which this government has blocked.

B.V. Mehta, Executive Director of SEA says MSP must be linked to productivity but that may be hard to implement. Last year, SEA had launched Mission Mustard and had sought (without success) the government’s help in increasing area under mustard in Punjab and Haryana through assured procurement at higher support prices. It has also proposed to partner with the government in field-level demonstrations of good agronomic practices to increase mustard yields. It has offered as a model its intervention in castor seed over the past two years covering 140 farmers and 160 hectares in Gujarat’s Junagadh, Banaskantha and Sabarkantha districts. The association’s members had picked the Rs. 35-lakh tab for engaging domain experts, training and employing agricultural science graduates as extension agents and for the free supply of inputs. As a result, the association says, average castor seed productivity rose by 80 percent to 4.5 tonnes/ha in the target farms versus 2.5 tonnes in farms of the control group.

(Top photo: A tribal woman threshing soybean at the Indian Institute of Soybean Research, Indore, in 2016. Photo by Vivian Fernandes).

(This article was first published in the Financial  Express. The last paragraph in that article has inaccuracies which have been corrected in the version posted above).