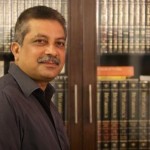 The consulting editor of this website is Vivian Fernandes who has been in journalism since 1984. He reported for the Hindustan Times, The Business and Political Observer (now no more) and India Today before joining TV18 where he worked for 18 years for its channel CNBC-TV18 in various capacities, including as economic policy editor and executive editor of a book on India and China authored the group’s founder, Mr Raghav Bahl.