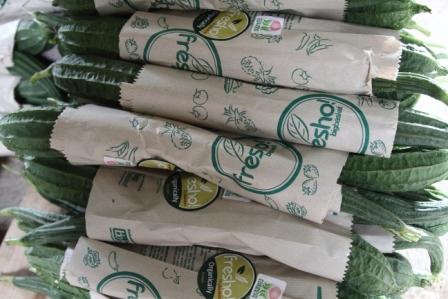 Participants made sweeping generalisations and even contradictory observations during an online seminar on ‘Reimagining food and agriculture in the next decade,’ on 26 June. Hemant Mallik, Chief Executive of ITC’s food division said people had even lost weight during the lockdown because they were eating healthy and immunity-boosting food.  But he also said the consumption of biscuits, noodles, snacks and other comfort foods had spiked. These are by no means healthy. Biscuits have maida, sugar and fat (as shortening), while noodles are deep-fried; most are made with refined wheat flour.

“Consumption of food had gone up,” said Damodar Mall, Reliance Retail’s CEO for the grocery business. “Food became centrestage” for people who tried to shut the virus out by avoiding contact with people, even as there were heart-rending scenes of poor workers and their families trudging home to their villages, with just enough food to keep them going.  As people were eating at home, they were buying premium ingredients. So “automatic premiumization’ took place. It was like pani-puri made with Bisleri mineral water, he said.

On the distribution side there was a disadvantage in produce changing hands multiple times during the lockdown and after. Mall claimed that Reliance Retail bought 80 percent of its vegetables directly from farmers. Customers apparently appreciated that the company was the “shortest distance” for vegetables to travel from farmers to consumers.

For Siraj Chaudhry, MD and CEO of National Collateral Management Ltd, the lockdown was a “big moment for supply chain companies.” Farmers from whom the government procured – wheat, rice, pulses, cotton and maize – did not hurt as much as those that produced vegetables, flowers and fruits. He said the ordinances to allow easier inter-state and within-state trading of agricultural produce, de-fang the Essential Commodities Act and facilitate contract farming were well-meaning measures whose impact would be felt over time. Because of these ordinances, a warehouse would not be just a storage place but an “activity centre.” It would become a mandi for price discovery.  Chaudhry said the lockdown and the plight of migrant workers showed that the Food Corporation of India was “not a waste of money.” The abundant stocks it had helped the government give food grain to the poor which was of ‘real value” to them.

Not all produce was being sold in the APMC market yards before the ordinances. But it would be done more confidently outside now and investors will be willing to invest in private market yards, Chaudhry said.

“Existing supply chains failed” during the lockdown, Karthik Jayaraman, President and Co-founder of Waycool Foods and Products said. Trucks were stuck with non-essential goods and were not available for the movement of essentials. E-passes had to be procured.  There was a shortage of labour to load and unload, and to drive vehicles. Farmers explored alternatives. Big brands approached his company because they wanted reliable delivery. They also valued the ability to order digitally.

“Multimodal transport became key” for Bayer CropScience said D. Narain, its Vice-Chairman & MD and CEO. Seeds and crop protection products had to be moved from factory to farmers and with the break down in road transport lines, the company even took recourse to trains. Seed production units had to be kept operational so that there would be ready supplies for sowing in the Kharif season. The company learnt useful lessons in agility. It also reached out to farmers with produce to sell; the grape growers of Maharashtra were connected to buyers in Bengaluru. There was a “significant leapfrogging” to order placement in digital mode.  The company is “connecting with about 100,000 farmers digitally everyday, giving them agronomic advice which was not imaginable about six months ago.”  He made the lockdown seem like the end of an era. “Companies need to own supply chains and farmers’ profitability. They cannot just sell and walk away.”

Rajan Anandan, the MD of Sequoia Capital said the covid-19 epidemic had accelerated the digitisation of consumers. People were ordering groceries online. E-commerce and direct-to-consumer brands got a boost. “Contactless drives digitisation,” he said. There will be massive software adoption. The velocity will increase as the number of active internet users ─ 500 million now─ will double by 2025-27.

If contract farming takes off on account of the new law banks will find opportunities for “tripartite” lending said Harsh Kumar Bhanwala, the immediate past Chairman of Nabard.  Farmers’ producer companies would set up warehouses and get finance against warehouse receipts. He said the APMC or regulated market yards will face more competition and will change. Some states have taken the initiative to upgrade them, he said.