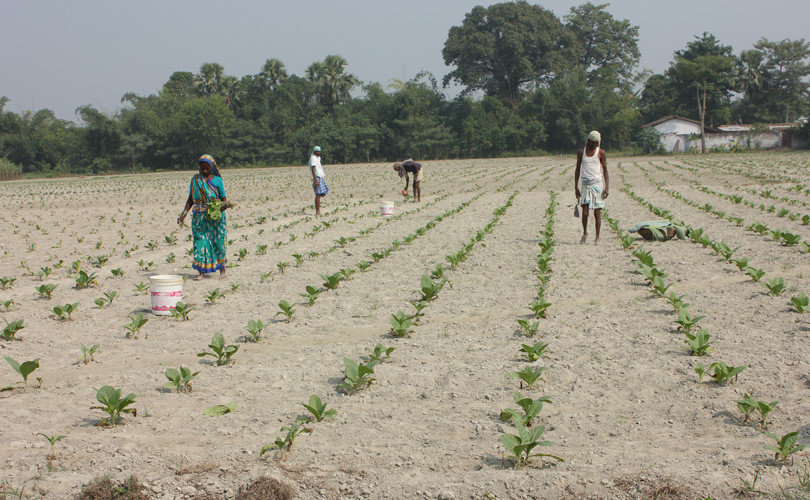 The cigarette industry is shooting from the shoulders of tobacco farmers. A half-page ad in the Times of India on 12 March says ‘vested foreign interests are threatening the livelihoods of millions of Indian farmers’. It has been issued by the Federation of All India Farmers Associations (should it not be all-India federation of farmers’ associations?!) based in Guntur, Andhra’s tobacco producing hub. Cigarette makers are unnerved by the order that requires cigarette packs to be 85 percent pictorial warning about the dangers of smoking. The ad says cigarette packs in the United States do not carry pictorial warnings after a court struck them down as unconstitutional. This is also the case in Japan and China, it says.

According to the ad, the average size of pictorial warnings in the top five tobacco producing nations of the world, which includes Malawi and Zimbabwe, is a fifth of the pack and the global average is 31 percent.

Cigarette makers fret that the warnings encourage smuggling. Smuggled cigarettes apparently do not carry any warning and lull smokers into believing they are safe. The surge in smuggling, they say, has reduced the market share of legal cigarettes to 11 percent of tobacco consumption.

The connections tenuous. Smuggling is encouraged by high taxation as the differential with tax-paid products made it profitable to evade levies. And high taxation is a fact that India’s cigarette industry will have to live with.

Despite the bad publicity, there is no let up in area under tobacco, which has risen from a low of 0.26 million ha in 2000-01 to about 0.45 million ha.  Productivity per ha has risen to 1,627 kg and output levels have been maintained or have increased. In Gujarat and Tamil Nadu the entire tobacco area is irrigated. In Bihar, 96 percent of tobacco area is irrigated and in Andhra, it is a third. Subsidies are propping up a harmful activity.

The ad is silent on developments in countries like Australia, where, in August 2012, the country’s apex court dismissed a petition by global cigarette makers challenging the order to dress up cigarettes in drab dark brown packaging in matt finish. The rule applies to all tobacco products sold in Australia. Tobacco industry logos, brand imagery, colours and promotional text, other than the brand and variant names, must appear in a standard colour, position, font style and size. About thirty countries are said to be following the Australian example though most have not gone as far as that country.