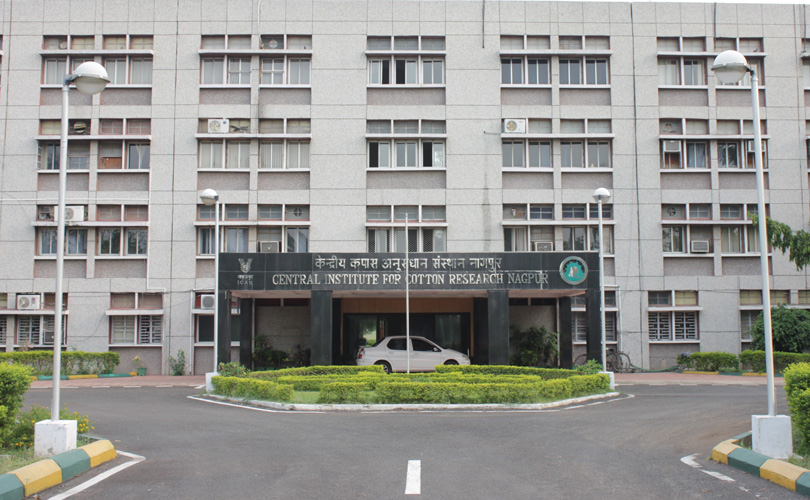 K R Kranthi of the Central Institute of Cotton Research tells Vivian Fernandes why he believes there is excessive hybridization of cotton in India and how high density planting of varieties can leave more money on the table for farmers.

Of eighty cotton producing countries, India is the only one to grow hybrids and it has gone overboard on them, says KR Kranthi, Director of the Central Institute of Cotton Research in Nagpur.

He proposes high density planting of short duration, early maturing straight varieties that will deliver more cotton at a lower cost and hopefully move farmers in dry, rain dependent areas of Maharashtra and Telangana from distress to financial comfort.

K R Kranthi, Director of CICR in his offfice.

(Straight varieties are those whose seeds farmers can save and re-use unlike those of hybrids which lose vigour and have to be bought every year).

He recommends a plant population of 110,000 per hectare, which is ten times more than what farmers do. Each plant will yield just four bolls against eighty which farmers take from hybrids by prolonging their life. The longer the duration of the crop the higher is the susceptibility to pests. ‘If they (bolls) mature in one go, plant protection becomes easier,’ says Kranthi. This means lesser use of insecticides and lower cost.

‘The whole world follows this approach except India,’ Kranti said. He spoke to this website after signing an agreement on 15 June with a team of Delhi University scientists who had developed Bt cotton plants toxic to boll worms using genetic modification technology, which is different from the five versions currently approved in India.

CICR is expected to incorporate the toxic gene derived from a soil bacterium in its straight varieties and hybrids suitable for central India.  Earlier, the Delhi University team lead by Prof Deepak Pental, geneticist and former vice-chancellor of Delhi University, had given the same technology to Punjab Agricultural University (PAU) for back-crossing into varieties suitable for the northern cotton zone.

Since the research was funded with public money, Pental wants the technology to be used for the public good. ‘If those varieties are given to farmers by (state) agriculture departments we do not ask anything. If they commercialize it, then they will have to give us some royalty,’ Pental said after signing the material transfer agreement (MTA) in the presence of S Ayyappan, director-general of the Indian Council of Agricultural Research (ICAR).  The media was not allowed to cover the event, though ICAR issued a press release.

Pental says their technology is about two times more potent than that of Monsanto’s against bollworms, though this claim could not be independently verified. CICR and PAU will have to conduct field trials and obtain bio-safety approval, before releasing it for commercial cultivation. Kranthi says the process will take about three to four years.  If approved, it may become the first Bt cotton technology in the public sector.

India had approved three Bt hybrids in 2002 developed by Mahyco Monsanto Biotech, a joint venture with Maharashtra Hybrid Seeds in which the American multinational seed company has a 26 percent state.

There are five Bt cotton technology providers now, who have 48 sub-licensees and 110 co-marketers. Monsanto Bt genes have the largest share of the market. .

Bollworms – pink, green and spotted – are hidden pests that would require eighteen to thirty sprays. After the introduction of Bt cotton, insecticide usage to control them has decreased from 9,410 tonnes in 2001 to 222 tonnes in 2011, according to CICR. But sucking pest attacks have increased.  This is because of the decrease in spraying for bollworm control and approval of Bt hybrids in areas prone to sucking pest attacks. But sucking pest control through conventional plant breeding methods is easy, says Kranthi.

Ironically, the cultivation method which Kranthi is propagating will obviate the need for Bt technology as boll formation during monsoons when cotton plants need water most will also help them escape boll worm attacks, as the insects arrive after the rains so their eggs do not get washed off.

CICR has been propagating high density planting through outfits like Wardha-based Ramakrishna Bajaj College of Agriculture, set up by a trust founded by Jamnalal Bajaj, the industrialist-benefactor of Mahatma Gandhi.

The college has been giving demos in farmers’ fields for the past four years.  It has covered twenty-two of them in Wardha. That is too small a number to make a difference. The district has 1,387 villages,  not all of which may be cotton growing.

Kranthi finds the ‘terror of the boll worm’ so deeply etched in the minds of farmers that ‘they are not willing to take my expertise, my statements,’ that they should grow cheaper non-Bt hybrids early in the monsoon season.

CICR is selling a non-Bt variety called Suraj for Rs 750 a bag of 5 kg. Bt hybrids are under price control and cannot sell for more than Rs 830 a pack of 450 grams in Maharashtra. This is a reduction of Rs 100 from last year. The state imposed the discount because of a slump in cotton prices earlier this year. Seed companies moved court, but did not get relief.

High density planting is viable only if seeds are cheap but availability is an issue.

‘I am not getting non-Bt variety. I would have planted it if I got it,’ says Ajay Vithobaji Ambore, 38, of Amgaon in Wardha district, who also doubles up as a ‘police patil’ or their listening post in the village. He is planting non-Bt Suraj, provided to him by the Ramakrishna Bajaj college, on one for the first time.  On the remaining three acres, he has sown Bt hybids.

There is no dearth of Bt hybrid brands in the market. In fact at 1,167 there seem to be more than are necessary. Seed sellers say consumers want choice; there is regional differentiation and farmers are discerning. Kranthi believes they create confusion.

Bt technology in CICR varieties may help persuade farmers to try out high density planting, as it will assure them that their crop will be protected should they become susceptible to boll worms.

There is an ideological undercurrent running through high density planting of varieties.  ‘Today we have come to a pass where we have to save farmers from companies,’ says Atul Sharma, dean of  Ramakrishna Bajaj college. He wants farmers to regain ‘seed sovereignty.’ He sees a conspiracy in the public sector agricultural research institutes not developing Bt cotton technology.  He believes they are colluding with private companies.

Private seed companies say high density planting is possible only with machine sowing and harvesting. For that the plants must be of uniform height and the bolls must form and burst at the same time. They are themselves experimenting with densities of 33,750 and 50,000 hybrids plants per hectare.

The first cotton hybrid  in the world was introduced in India in 1971.  Kranthi may be right that excessive hybridisation or reliance on one plant protection technology – Bt – is not wise. But changing course might be difficult unless CICR harnesses the drive of private enterprise with appropriate incentives.

Click here to read a version of this story published on www.firstpost.com