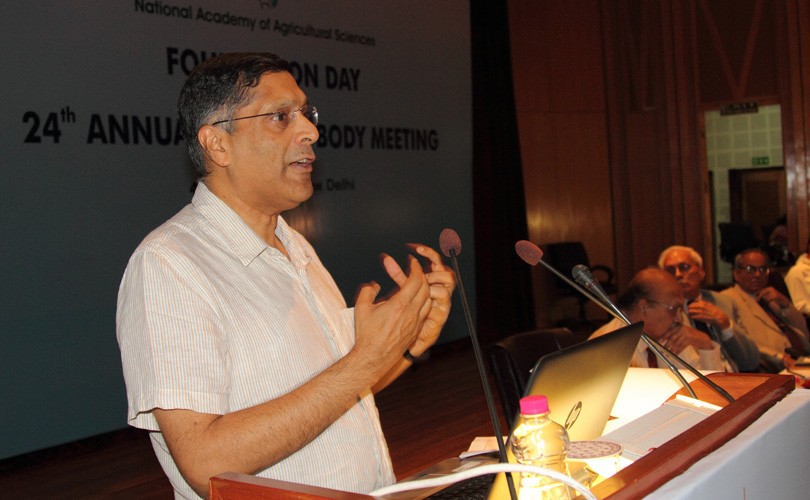 “If the terminal value of livestock assets declines it will make livestock farming uneconomical.”  That was Chief Economic Adviser, Arvind Subramanian’s camouflaged way of saying that if impediments were created in the sale of cattle and buffaloes for slaughter, the dairying industry would suffer. He had to be circumspect given the reverence that leaders of the government he serves in, have for bovines. He was referring to the rules for regulation of animal markets which the environment ministry had notified about a week ago. These says that cattle, including buffaloes, traded in animal markets cannot be slaughtered.

Subramanian said such a policy would also affect “social capital.” If the number of stray cattle increased because of the ban on trade for slaughter, the incidence of afflictions like foot and mouth diseases spreading from such abandoned and weak animals would increase.

The CEA was giving the foundation day lecture of the National Academy of Agricultural Sciences in Delhi.

Touching on another sensitive subject, the CEA said “expropriating property rights retroactively and not respecting contracts” would harm farmers. He was perhaps referring to last year’s price control order of the agriculture ministry, which denies pricing freedom to the patent-holders of genetically-modified (GM) plant traits like insect resistance. The ministry is now trying to deny them licensing freedom as well.

The CEA said efforts have to be made to “ensure there is no abuse of monopolistic positions,” adding that India had tools like competition policy to tackle such abuses.

The cost-benefit analysis of GM crop technology must be done by farmers, he said, alluding to the tendency of anti-GM technology activists to speak for them.

Subramanian said India must love cereals less and love pulses, oilseeds, fruit and vegetables and livestock farming more. Pulses and oilseeds, he said, were socially-useful crops as they consumed less of subsidized fertilizer and also enriched the soil with nitrogen from the air. They were more nutritious too.

More people would have to give up agriculture. At the same time technology would have to make it more productive, profitable and climate resilient.