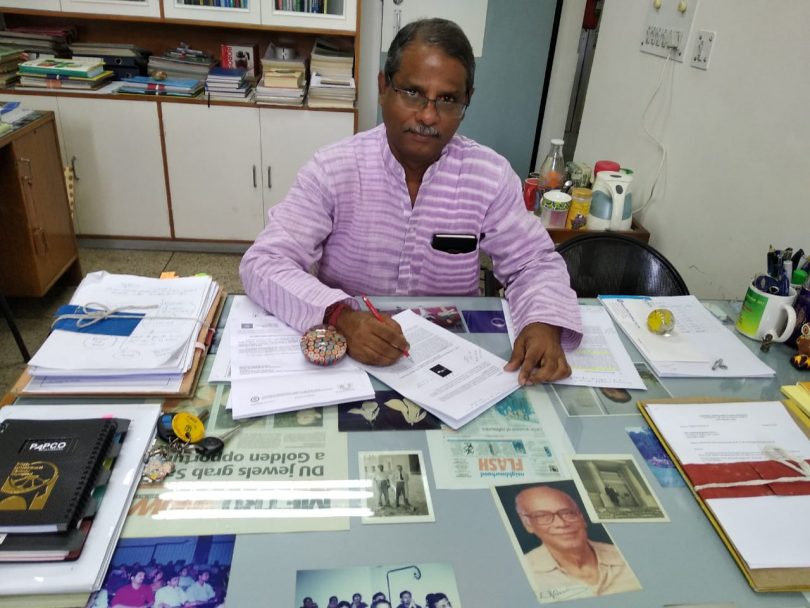 We asked Pradeep Burma, Professor and Head of the Department of Genetics, Delhi University to comment on the methodology used by the Centre for Science and Environment to detect the presence of genetically-engineered plant material in food samples sold in India. These are his comments:  (See accompanying story for the views of the Food Safety and Standards Authority of India. For a rounded story click here).

“The study lacks rigour in experimental design and analysis. The methodology it has used ─ Polymerase Chain Reaction (PCR) ─ is extremely sensitive and can pick up minuscule traces of DNA from all kinds of samples, he said.  So robust controls should be in place to ensure it does not pick up contaminants. The manual for the test kit used in the CSE investigation recommends three control reactions: negative control, positive control and extraction control. While negative control has been used there is no extraction control.”

“Most samples in the study have thrown up similar Ct values. This is not possible because different material – Bt cotton leaf, food containing material obtained from GE plants like corn, and oil derived from transgenic crops – will carry different amounts of transgenic DNA. For example, the Ct value of 27.7 for 35S P (a promoter derived from the Cauliflower Mosaic Virus and found in most genetically-engineered or GE plants) in Hudson brand canola oil and of 28.5 in Bt cotton leaf does not reflect the expected differences. (Ct value is inversely proportional to the DNA/RNA present in a sample).  The yield of DNA from a transgenic plant where all the cells will have genetically-engineered DNA is expected to be much higher than in oil where most of the DNA will get degraded and fragmented in the course of processing. In the CSE study, the Ct values of the oil sample show more amount of 35S P DNA in comparison to those in Bt cotton leaf samples.”

CSE has been asked to comment on Burma’s comments. This story will be updated when we receive them.

The current study lacks rigor in experimental design and analysis. My observations are solely based on the report by Drs. Vijayan and Banerjee, titled “qPCR-based detection of genetically modified processed foods in India” from CSE, July 2018.  The current study uses quantitative PCR (qPCR) as a tool to identify the presence of fragments of DNA that have been used to develop different transgenic plants in the food and oil samples.

While there are several techniques and kits available for detection of GM in food, proper experimental designs are essential for reaching a correct conclusion. PCR is an extremely sensitive method that has the capability of picking up minuscule traces of DNA from all kinds of samples. As it is sensitive it becomes equally important that robust controls are in place to ensure that the reaction is not picking up contaminants. The SureFood GMO screen kit has been used in the present investigation. A reading of their manual recommends three different control reactions: negative control, positive control and extraction control. While a negative control (sterile molecular grade water) has been used in the present investigation no extraction control has been used. In a negative control, you add water to the reaction instead of the DNA sample. This ensures that there are no contaminations during the setting up of the PCR or reaction. This is only a small part (which is also highly controlled) of the whole experiment.

Lack of extraction control: The major chance of contamination could be during the extraction, which is a multistep process. Thus extraction controls are very important. In this case, you take a certified plant material that should not contain any of the DNA fragments (35S/NOS/FMV) under test, carry out the extraction and PCR just as you do with the samples under test.  The values obtained in this control, if any, will help determine what shows the presence of ‘GM-DNA’ in test samples.

The manufacturers of the kit also mention, “The 35S promoter is originally derived from the Cauliflower Mosaic Virus. Brassicaceae species are the host of the CaMV. Therefore, the analysis for the 35S promoter also detects the naturally-occurring virus. It is possible that a sample containing the virus yields a positive result, although no GMO is present”. I am quoting this line to ONLY to bring out the point that one has to be extremely cautious when analyzing such data. I am not suggesting that this could be a reason.

Most samples have similar Ct Values: As an example, the Ct value for 35S P in Canola (Hudson brand) and cotton leaf is 26.7 (~27) and 28.5 (~29).  As Ct value is inversely correlated with the initial amount of DNA present in a sample, Canola oil seems to have more of it as compared to leaves taken from a transgenic plant. This brings me to the process of extraction of DNA from plant material, from packaged food and from oil. It is highly unlikely, that all these materials will even give me the same amount of DNA.  A transgenic plant material should have the highest as all its cells will have the DNA, followed by processed food which will be a mixture of things and of course isolating DNA from oils will be the trickiest and thus would yield the lowest amounts. Thus each sample would have different concentrations of the DNA prepared. Given that the report mentions that 5 microlitres of DNA have been used for each reaction there are bound to be variations in the amount of starting material and thus the Ct values.

Extracting DNA from oil is tricky. Whatever DNA will be present after the various processing methods will be fragmented and yields will also be extremely low. I searched the internet and found kits which can do this e.g. one from Sigma (see the attachment). The first few lines in the brochure highlight the difficulty in doing such isolations.

Reading the manual of DNeasy Mericon Food Kit that was used for isolation of DNA in this investigation, they have specialized protocols for isolating fragmented DNA (though not from processed oil).  From the materials and methods in the report, it seems that the same protocol has been used for leaf sample, processed food and oil (except for an additional spin).  Therefore, it is highly unlikely that the DNA samples prepared from different sources will have a similar concentration of DNA, which should have reflected in major variations in the Ct values.

The report does not discuss the observations made (which is highly unscientific) and probably leaves it to the imagination of the reader (who may not be well versed with the subject area).

The absence of replicates: Replicates (both biological as well as technical) are must in any analysis. Although the report mentions that samples were treated in triplicates there is no mention of whether it is biological or technical replicates. Biological replicates are essential for such analysis as also mentioned in the manual of the kit.

These are some of the concerns I have about the work done.

(Top Photo of Pradeep Burma has been provided by him).