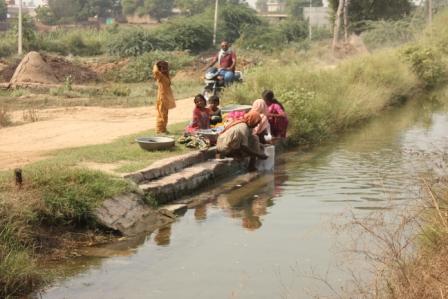 Central and state government policies on farm subsidies are riddled with contradictions.

In Punjab 112 out of the state’s 138 blocks are in the “dark zone,” where groundwater is being drawn faster than the recharge rate. This is the result of free or very cheap power supplied to farmers since February 1997. Even as the state wants to wean farmers away from water-guzzling paddy, area under the crop has expanded from 11.81 lakh hectares in 1980-81 to 30.46 lakh hectares in 2016-17, reports Anju Agnihotri Chaba in the Indian Express. The number of electric pumps connected to tube wells has risen from 28,000 to 13.5 lakh during this period, the report says.

In 2009, the state enacted the Punjab Preservation of Subsoil Water Act which prohibits nursery sowing and transplanting of paddy (which requires standing water in fields) between 15 May and 15 June when summer is at its peak.

But assured procurement of paddy at minimum support prices (MSP) has deterred farmers from growing crops like cotton, maize and groundnut that use less water. The centre’s Budget announcement of ensuring that MSP is 50 percent above the cost of cultivation (all cash expenses for inputs plus imputed value of unpaid family labour, called A2+FL in jargon) will make paddy more attractive, says Harish Damodaran  in another report in the same newspaper. If the Budget formula were adopted, he says, the current MSP for paddy would have to be raised by Rs 150 to Rs 1,700 a quintal.

In another, disjointed move, the state is experimenting with a payment of Rs 48,000 per tube well directly into the bank accounts of farmers in three villages ─ Chaur Wala, Bharnarsi and Bhagrana ─ of Fatehgarh Sahib. Electricity consumed at these tube wells is recorded on digital meters. The farmers will have to pay for the electricity consumed at the rate of Rs 5.06 a unit. If they consume less, they keep the savings. The hope is that farmers will be judicious in water ─ and electricity ─ use.

Similar contradictions in policy are also obvious in Telangana move to  give a flat Rs 4,000 subsidy per acre for kharif and the same amount for the rabi season. The payment will be made to all the farmers, big and small. Officials have told Sreenivas Janyala of Indian Express that of the state’s 72 lakh farmers, 98 percent own less than 10 acres. Only 0.25 percent own 25 acres or more. The cash transfers are meant for purchase of inputs. But farmers can also keep their land fallow if they wish. The scheme will cost Rs 9,600 cr a year. But it will leave out tenant-farmers who are said to comprise 40 percent of the state’s farmers.

To disburse the subsidy, the state will issue land ownership passbooks to farmers identified as per the revenue department’s survey. It will have the farmer’s name, land survey number, holding size in acres, Aadhar number and mobile phone number.

The subsidy will not be given to tenant farmers to avoid litigation by owners.

Subsidizing farmers is the right thing to do, provided inputs are sold at market prices. But urea, for instance, carries a central subsidy, so Telangana farmers will be doubly subsidized.

The state’s policy of giving electricity free to farmers round the clock, a decision announced on 1 January, is also contradictory as it will encourage unsustainable farming. The per acre subsidy plus free power will cost Rs 16,000 cr or about 14 percent of the state’s revenue receipts of Rs 1,13,083 cr for 2017-18. This will be fiscally straining.

Meanwhile the centre is pushing a Rs 6,000 cr plan to tackle depletion of water in 1,034 “dark zone’ blocks following the Central Groundwater Board’s assessment of 6,584 blocks.  A lot of money is being thrown at farmers without  an overarching sense of purpose.

(Women washing at a canal in Haryana. Photo by Vivian Fernandes)