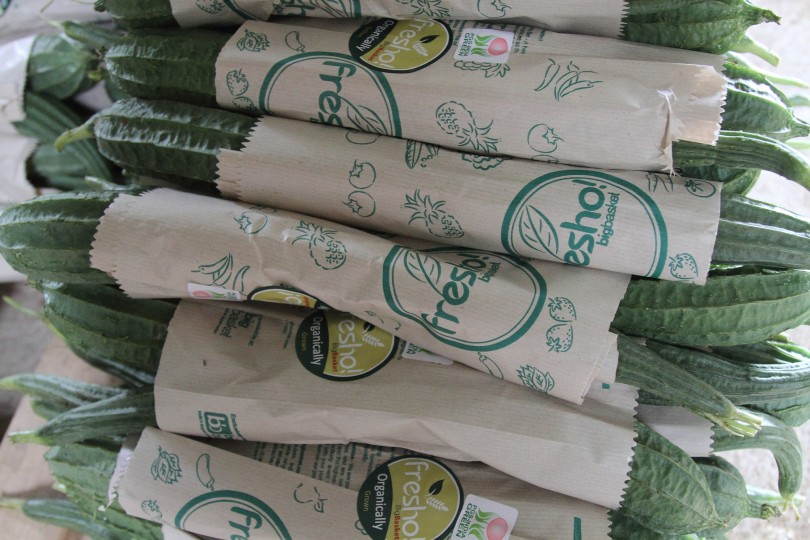 With apps, payment gateways like UPI and Aadhar-linked bank accounts atomised farmers can be brought together and linked to consumers says Vivian Fernandes. This report was first published in www.yourstory.com, a website devoted to start-ups and entrepreneurship.

Every working day, Mohan Kumar hops on to his motorcycle to do the rounds of fields about 20 km from Mysuru city.  He watches for pest attacks and diseases using an app called CropIn, takes photographs and lifts soil samples. Kumar is one of six agronomists employed by Big Basket, an online grocer. The 62 farmers attached to Mandanahalli collection centre are required to supply organic produce to the Bengaluru market.  Kumar has to ensure the produce is not chemically contaminated.

By connecting farmers to consumers, Big Basket is complementing Karnataka’s programme to promote organic farming. The government gives seeds that are suitable for organic cultivation, neem cake and oil, the seeds of plants which are ploughed into soil to enrich it, plastic drums to make liquid manure and subsidy for construction of vermicompost pits. But the programme will not sustain if farmers cannot find markets to sell profitably.

‘They call us and tell us what they want and the quantities required. Whatever does not meet their grade we sell

Chennaveerappa, a farmer of Shettynayakanahalli village in Mysuru taluk, at his organic vegetable farm.

locally. They give us 10-15 percent more without commission (about 10 per cent charged in the regulated mandis by arhatiyas on various pretexts),’ says Chennaveerappa (no surmame), who has taken to growing vegetables and bananas organically on a part of his 5-acre plot in Shettynayakanahalli in Mysuru taluk.

‘If I sell to Big Basket, I save on transport,’ says Nataraj (no surname) of Mandanahalli. He is growing ladies finger and chilly without chemicals. This he has been doing for five years after finding that fertilizers damaged the soil.

Farmers have always focused on the production function; some have excelled at it. But for profitable agriculture, farmers must work backwards, producing what consumers want at rates they are willing to pay. This is where food processors and organized retailers like Big Basket come in.  Smart phones and mobile internet help aggregate atomised farmers just as Uber does with taxis. With apps like CropIn farmers can be hand-held in good agronomic practices from a distance.  Gateways like UPI launched earlier this month and bank accounts linked to Aadhar identity numbers vastly reduce the friction of making payments.  IT guru Nandan Nilekani, speaks glowingly of the tantalising prospects of this combination of technologies.

Big Basket does about 100-110 tonnes of groceries a day. It is not a big player in fruit and vegetables. They accounted for just 17 percent of July’s grocery sales of Rs 112 cr. The Mandanapalli collection centre handles about one to 1.4 tonnes of produce a day. This is the quantity sold by just one Safal outlet of Mother Dairy in Delhi. Safal has 300 of them in the capital city and they do 350 tonnes a day. But it has been in action since 1986.

At the Madanapalli centre, vegetables are manually sorted out, packaged and despatched to the distribution centre at Mahadevapura in Bengaluru where orders for F&V and groceries are segregated, bar coded, pooled, and despatched to five hubs in the city, from where they are delivered to homes. The grocer has such collection centres in eight metros and mini-metros. It operates in 25 cities.

Seshu Tirumala, national head for merchandising, says Big Basket has a base of two million customers of whom about half a million buy every month. Eighty five percent of the customers tend to stick on after three purchases. It is uneconomical to deliver orders of less than Rs 500.  The typical order value is about Rs 1,400. Customers are persuaded to spend more with discounts ─ 4 percent for orders above Rs 1,500 and 7 percent if they are double the size.

Big Basket wants to be entirely organic as that is where fussy customers seem to be heading. But when it charged a premium, sales dropped so it has settled for a mark-up of about 10 percent over conventionally grown fruits and vegetables that account for the bulk of its sales.

Organic might be consumer code for safe food. High productivity cannot be affordably achieved without chemical

fertilizers. Farm yard manure is needed to enhance soil texture and promote growth of beneficial microbes. The blend makes agriculture sustainable, says the Indian Institute of Farming Systems Research in Modipuram, near Delhi. Protocols should be followed with pesticides as well.  In the Chickaballapur and Kolar areas, cauliflower, cabbage and brinjal are dunked in pesticides just before harvesting, says Kumar. If spraying is done in prescribed doses and safe waiting periods are observed, mass-produced fruits and vegetables will not be unhealthy.

Big Basket is engaged with 1,100 farmers. It has informal arrangements with them. ‘We may move to contract farming in the future,’ says Vipul Mittal, the category head for fruits and vegetables. Currently consumers place orders through an app. This facility can also be extended to farmers, who can tell Big Basket what they have to sell and the time of harvesting. ‘This will help us plan logistics better,’ says Mittal.

Pravesh Sharma, co-founder and CEO of Sabziwala.com, a start-up which began selling fruits and vegetables commercially in Delhi in June thinks tactile experience is essential to buying green groceries and they cannot be successfully sold online.  The IAS officer who quit the service at age 57 sells them in packets with fixed prices through franchisees. An app informs consumers were the stores are. Sabziwala sells 17 tonnes per day in Delhi’s Dwarka and Janakpuri.  Sharma was agriculture secretary of Madhya Pradesh and also managing director of a central government entity which promotes farmer producer companies, with which Sabziwala.com has sourcing links.

By upgrading farming standards, grocers like Big Basket and Sabziwala can create reliable sources of supply, which other buyers can tap into. Deesa town in Gujarat has become a hub for potatoes used for wafers and French fries because of the groundwork done by two MNCs. At last count, it had 135 cold storages.

Not all grocery start-ups may last but they can leave a lasting impact.

(Top photo of ridge gourds being individually packaged at Big Basket’s collection centre at Mandanahalli in Mysuru taluk. All photos on this page by Vivian Fernandes)

Link to report on yourstory.com