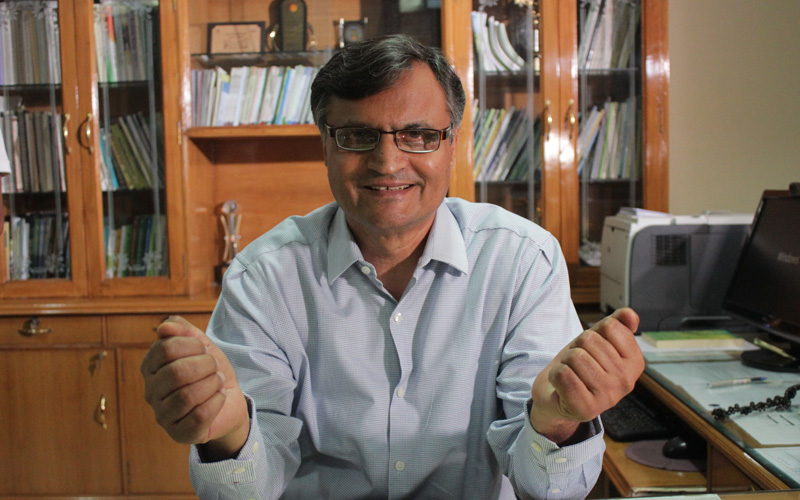 India introduced nation-wide crop insurance in 1985. The various schemes covered 30.5 million farmers in 2013-14 (both rabi and kharif) and 37 million ha. Following extensive crop damage earlier this year because of hailstorms and untimely rains, there has been a clamour for expanding their coverage and making them truly risk mitigation instruments. Vivian Fernandes caught up with Ramesh Chand, director of the National Centre for Agricultural Economics and Policy Research, Delhi. Chand was consulted by the P K Mishra committee for review of crop insurance which gave its report in May 2014. He is also a member of the task force on agriculture set up by NITI Aayog, the successor to the Planning Commission. Excerpts from an interview.

Question:  Agricultural insurance does not seem be helping farmers.
Ramesh Chand: Insurance does not cover even 25 percent of farmers in number or more than 20 percent of area. There is no full cover either. Agriculture was taken as a vocation which involves risk. So long as commercialisation was not high the need for risk mitigation was not high. But now, inputs are purchased; they are not home produced. Profit is the main consideration. And unexpected weather events are hitting more frequently and becoming more severe.

Is crop insurance coverage low because it has been largely public-sector driven?
Ans:  Even in the United States, agricultural insurance is not viable. What I gather from the literature is that even there 70 percent subsidy is given. In India, there is the added problem of small farm sizes.

How does small farm size affect insurance?
Ans: It raises the transaction costs.  Suppose a farmer with two acres insures his wheat crop. The insurance agency will have to visit the field to ascertain whether he has actually sown the crop insured, monitor its condition from time to time, and if there is a claim of loss, verify that  the claim is true and estimate the damage. All these things, even without moral hazard (fraud), are very, very costly.

The alternative is to assess damage based on crop cutting experiments at the district, block or village levels. But averages will result in frustration if farmers who did not suffer losses get compensation or those that actually did get inadequately compensated.  We can go for remote sensing technology which can say what the crop condition in a field was at two points in time, say of rabi wheat in January and April, and then come up with some estimate of loss. We do not have that kind of mechanism. So right now we are going with crop cutting experiments. These things have serious limitations.

How serious are frauds in agricultural insurance?
There are moral hazards. They are not limited to crop insurance.

Is the incidence more…
Right now, the way it is designed, in some situations it can be manipulated. Not that it can be manipulated everywhere. Crop insurance is not like motorcycle insurance where there is a  registration number, photograph and so on. In case of agriculture, you can sow one crop, in the middle of the season you can change the crop, you can make a loss happen… I will not say that farmers tend to do these things more. The conditions of agriculture are such that the possibility of these kinds of things is quite high. This is the reason why we are not able to come up with an effective instrument of agricultural insurance or increase its penetration.

Is weather based crop insurance a better option?

Ans:  In weather insurance you are not insuring a crop, but you are insuring against a weather event. Suppose normal rainfall in monsoon in a particular district is 30 cm. Therefore if rainfall goes below 25 cm, the insurance company will pay you something. If it goes below 20 cm it will pay you more than that. If rainfall is just 10 cm it will pay you much more. So the payment made to you is linked to rainfall, excess of rainfall, or deficiency of rainfall, or to temperature or to hailstorm or to landslides. Weather insurance is a derivative but one merit is that it has much less defects compared to the other kind of crop insurance.

Why not aggressively promote it?
I feel if we have to do something against natural events this is the ideal thing in India.  But you need a very high density of weather stations.

Is the investment and recurring cost on weather stations worthwhile?
These weather stations will serve other important purposes as well like forecasting, agro-meteorological information which can be linked to advisories etc. They will do multiple things.

Why not forget insurance and provide income support?
Ultimately what matters to farmers is not only what affects production but also what affects price. I feel that the price risk can be addressed through other mechanisms. We should not mix the two.

Recently, the ministry of agriculture has designed an income insurance scheme for farmers and it will be tested as a pilot scheme in some places. It came to me, I suggested some modifications.

In view of the difficulties of making agriculture insurance an effective instrument of risk mitigation what would your recommendation be?
I feel till the time we are able to bring improvement in agricultural insurance or develop our space technology and remote sensing to the extent that we can assess what is happening at the field level, till then I would say that all that money which the govt is spending in subsidising insurance premiums, bearing the losses and so on, I think till we come up with some workable mechanism in insurance it is better for the government to strengthen and enhance the compensation mechanism.  If there is a  drought or flood or hailstorm in a particular area,  the government machinery should ascertain the loss and compensation (not mere relief) should be given.