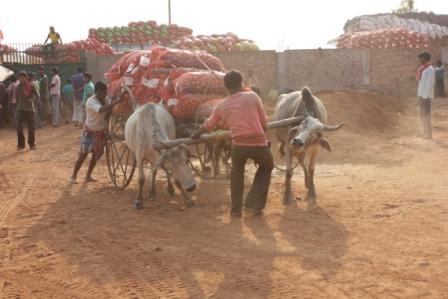 Vivian Fernandes analyses two contradictory opinions on the applicability of the milk experience to tomatoes, onions and potatoes — vegetables whose prices are most volatile. These growers, the Prime Minister says are his TOP priority, punning on their first letters. But it is all POT, as the Congress Party dubs it?

Can Operation Greens borrow from Operation Flood? In his Budget speech, Finance Minister Arun Jaitley said Verghese Kurien’s initiative of organizing small dairy farmers and connecting them to markets through the Gujarat Cooperative Milk Marketing Federation, also known as the Amul model, would be the template for reducing volatility in the prices of tomatoes, onions and potatoes, or TOP as the acronym-minting Prime Minister called them. Jaitley made an allocation of Rs 500 cr which, he said would be spent on setting up farmer producer organisations, agri-logistics facilities, processing units and management training.

Picking up the thread in the Indian Express, agricultural economist Ashok Gulati and researcher Ritika Juneja say that the lessons to be learnt from Operation Flood are linking large consumption centres to major production centres with the fewest possible intermediaries in between. Currently the entire supply chain is fragmented.

Organizing farmers and increasing production is the easier part, they say. There are 3,000 farmer producer organizations already. They can ramp up production to meet demand. They can also aggregate the produce and assay, sort and grade it. The packaging should have bar codes for traceability.

A chain of modern cold storages will have to be set up. These can reduce wastage to 10 percent, unlike traditional ones in farmers’ fields, which waste about 25-30 percent. The storages should be economical to run. A cold storage In Uttar Pradesh which buys power at Rs 10 a unit can reduce its cost by installing solar panels on roofs to generate power at about Rs 4 a unit.

Restrictions on stocking of produce under the Essential Commodities Act will have to go.

Gulati and Juneja also emphasise processing. At least a quarter of the fresh produce must be processed, in their view, into tomato puree, dehydrated onions and potato chips and powder, which households and bulk consumers can use.

The challenge Gulati and Juneja say is to find markets that can give remunerative prices on a sustainable basis. The Amul cooperatives pay farmers 75 percent of the retail price. The producers of TOP should get at least 60 percent of what consumers pay.

But for Operation Greens to be a success it must be driven by a mover and shaker like Kurien. A bureaucratic mindset cannot deliver.

But Shreekant Sambrani, the founder-director of the Institute of Rural Management, Anand and former adviser to the National Dairy Development Board (NDDB, which is based in Anand) does not quite agree that Operation Flood can be the model. Writing in the Business Standard, he says both milk and TOP are affected by seasonality. To even out the price, milk is processed during the flush season into milk powder and butter oil which can be reconstituted into liquid milk in the lean season. But dehydrated onions cannot be converted into fresh onions and tomato puree is no substitute for fresh tomatoes. The Indian consumer’s demand is for fresh produce, not their substitutes. So the milk experience of evening out prices cannot be replicated for vegetables, “a fundamental point that has escaped the learned economist-champion of the scheme” ─ a veiled reference to Gulati─ “and now, alas, even the Government of India.”

But are diets and tastes cast in stone? Tomato puree became a fixture on kitchen shelves only since the 1990s after PepsiCo set up a massive tomato and chilly processing plant at Hoshiarpur (in 1989). Horticulture development was a condition imposed on it for the license to produce and sell carbonated beverages. It later exited the business, but by then it had set the base for tomato production in Punjab.

Similarly, Maggi instant noodles are now ubiquitous. They are the only hot meal that is readily served in the hills. But they were launched in India in 1984.

Through sustained marketing  people can be trained to use dehydrated onions. They will not be exact substitutes but when fresh onions cost an arm and leg, there will be buyers for them.  Processed potato can also be processed into several palatable products.

Processing can take some of the supply out of the market during the flush season and lift prices. Bulk consumers can use processed onions, potatoes and tomatoes and reduce the demand pressure on fresh produce.

When farmers are not compelled to dump onions, potatoes and tomatoes on the road during periods of over-production, boom-bust situations can be averted.

Sambani says NDDB could not replicate the success of Operation Flood in Operation Dhara, which was to increase oilseed production by imposing high tariffs on imported cooking oil. Dhara failed because there was no breakthrough in oilseed productivity unlike Operation Flood, which raised yields by introducing better breeds and scientific animal management practices.

Sambrani may be right about Rs 500 cr being a token allocation but large scale contract farming involving companies or cooperatives does work. Jain Irrigation has done wonders for banana cultivation in Jalgaon (Maharashtra) and McCain has increased the production of processed potatoes in Gujarat.

(Top photo: Pathetic scenes in West Bengal in 2015 as potato farmers rush to cold storages to protect their produce when prices collapsed due to production in excess of instant demand. Photo by Vivian Fernandes).