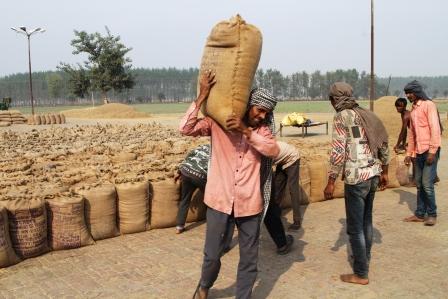 There hasn’t been a big increase in the share of wheat or rice procured by the previous or present governments though Finance Minister Nirmala Sitharaman tried to score points with the Opposition in her budget speech by claiming that her government’s payout to farmers had vastly increased, reports Vivian Fernandes.

Much of her budget speech on agriculture was directed at concerns which farmers protesting on the borders of Delhi have raised, though it has little to do with budget outlays. The FM said the value of wheat procurement had more than doubled from Rs 33,874 cr in 2013-14, the last year of the previous government’s term, to Rs 75,061 cr in 2020-21. Over 43 lakh wheat farmers had benefitted, she said. She did not provide comparable figures of beneficiaries in 2013-14. The annexure to her budget speech says the figures are “NA” or not available.

High government procurement means private traders are being edged out by higher-than-market prices offered by the government. This is the reason why the protesting farmers of Punjab, Haryana and western Uttar Pradesh want a legal guarantee that rice and wheat will be procured from them at fixed prices. They don’t want uncertain and volatile market prices.

The government claims that the purpose of the three central farm laws which the protesting farmers want to be withdrawn is to make agriculture market-driven. But the claims it made about procurement in the budget speech contradict that intention.

I am disappointed with the budget for what it missed. It should have provided a road map for crop diversification in Punjab, Haryana and western Uttar Pradesh. These states are producing too much of wheat and rice, which India doesn’t need. They should produce more maize, mustard and pulses. Ashok Gulati, a member of the Supreme Court’s committee on farm laws, had wanted a Rs 10,000 cr fund for Punjab to shift out of wheat and rice. If the government had provided such a fund, it could have incentivised the state’s farmers to grow the crops India is deficient in with assured procurement at fixed prices.

The finance minister has introduced a cess to finance agricultural infrastructure. The agriculture infrastructure fund is expected to be of Rs 900 cr. It will be financed with a cess on select imported items including petrol, diesel, gold, silver, apples, liquor, crude palm, soy and sunflower oils and urea. On liquor the cess is 100 percent, on apples 35 percent, on palm oil 17.5 percent and on gold and silver 2.5 percent. The basic customs duty has been reduced so that there is no impact on the consumer in most cases, the FM said. But it will deprive the states of their share of customs revenue as cesses are not shared. Cesses have a habit of creeping on more items. The FM says the revenue will be used to improve the infrastructure of the regulated market yards, which are in the domain of the states. But states already impose mandi cess, which is three percent in Punjab on wheat. They are unlikely to reduce it. Isn’t it better to charge a fee from the users of the mandis than tax imports?

For all the bluster about doubling farmers’ income, the allocation for the agricultural ministry is up by Rs 6,260 cr at Rs 1.23 lakh cr. This is 5 percent more than the revised estimate for this year. The spending on centrally sponsored schemes this year was 14 percent less than the budgeted outlay.  The under-spending was pronounced in a few cases: on micro-irrigation by 36 percent and on Rashtriya Krishi Vikas Yojana, which promotes horticulture, by 32 percent. The budget for agricultural research and extension has been raised by 10 percent over the revised estimates of this year, which itself is seven percent less than the budget estimate.

The FM did not make any ideological kowtows. She had surprised last year with emphasis on the dubious Zero Budget Natural Farming.

(Top photo of procurement of paddy in Ludhiana, November 2019, by Vivian Fernandes)