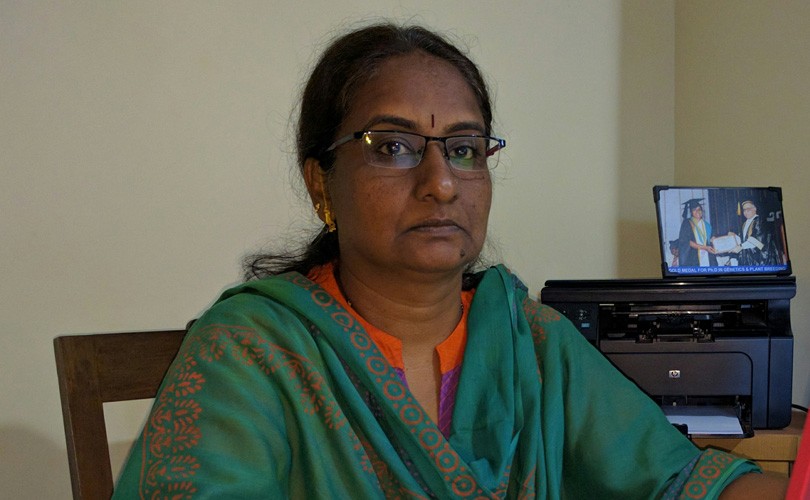 Manjula Maralappanavar,a researcher on Bt cotton was thwarted by her seniors but she fought back, reports Vivian Fernandes.

The University of Agricultural Sciences,Dharwad (UASD), signed an agreement with the Indian Council of Agricultural Research (ICAR) on 27 July for further testing of a Bt cotton “event” developed by one of its researchers, but only after her persistence and fortitude were severely tested. An “event” is an  agricultural biotechnology term for the location of a transgene on a chromosome.

After a decade of effort, Manjula Maralappanavar says she developed UASD Bt Cotton Event No. 78 with a gene construct provided by the International Centre for Genetic Engineering and Biotechnology (ICGEB) at Delhi University’s South Campus, with permission from the Review Committee on Genetic Manipulation (RCGM). From many potential transgenic candidates, event No 78 was selected and advanced, she says. The development work happened at a laboratory set up between 2005 and 2008 at UASD with funds from the Department of Biotechnology (DBT).

Data about the efficacy and commercial potential of the event were presented in April 2014 to the university administration and the institutional biosafety committee (IBSC)  headed by Vice-Chancellor D P Biradar with a request to allow bio-safety field trails, Maralappanavar says.

Instead, in July 2014 she was shifted to the All India Coordinated Research Project on Safflower, an oilseed, at Annigeri, 60 km away from her laboratory. She says she was not allowed to work in her purpose-built laboratory. The minutes of the IBSC meeting, which are necessary to move to the next stage, were not finalised untill four months later. The lab and greenhouse were dismantled in February 2015 and the instruments and material were locked in a room, she says. According to her, this resulted in the destruction of most of the research results, but the event itself was saved despite a non-supportive working environment.

In response to an email from this correspondent, Vice-Chancellor Biradar directed Director of Research S L Madiwalar to respond.  Madiwalar said the allegations were “totally far from truth.”  The transfer of Maralappanavar was to a “more responsible and independent breeding post” Though the Annigeri station is some distance away, provision was made for her to carry out her work on Bt cotton at the agribiotechnology centre in the main campus. Maralappanavar says she was allowed to work on Bt cotton one day a week after the state women’s commission intervened, and for three days a week from December 2015 onwards without a posting and after the destruction of her research results. Madiwalar says the campus centre is better equipped for GM (genetic modification) research, than the laboratory where Maralappanavar was working, which is 11 km away from the main campus. She contests the claim. She says the laboratory was deliberately dismantled and transgenic seedlings destroyed in February 2015.

The university says it has told Maralappanavar to apply for funds she needs to continue her work so there is “no question of harassment and prevention of her from doing her research.”  It says there has been no unusual delay in signing the agreement with ICAR and ICGEB for transfer of genetic material. When three institutions are involved some back and forth is unavoidable. It blames the researcher for not handing over GM cotton seeds with her for transfer to the two ICAR institutes where further research and trials are to be held.

Maralappanavar says though ICAR gave the MoU to the university for signing in July 2015 and the material transfer agreement with ICGEB in August that year, the university did not act. So she had to knock on various doors in the state government, meet the Director-General, ICAR in Delhi and also write to the Prime Minister’s Office, before the university got moving after repeated reminders from ICAR.

Maralappanvar says the toxic gene which she has used is from a different source than that of Monsanto, the American company whose bollworm-killing Bt cotton technology dominates the Indian market. But she says it is more potent.

This correspondent presented the data provided by Maralappanavar to geneticist and former Vice-Chancellor of Delhi University, Deepak Pental, whose team has developed GM mustard which is now awaiting approval from the government for cultivation by farmers. It has also developed Bt cotton technology which ithe Central Institute of Cotton Research, Nagpur and Punjab Agricultural University, Ludhiana, are crossing into their popular varieties.

“We believe there is something interesting here,” Pental said. In his view “expression levels (of bollworm-killing toxin) in event 78” developed by Maralappanavar “seem to be better than those in Monsanto lines” and “the event should be tested in the public system.” He said “she should be given some funding for molecular characterization of the event.”

This work will now be done by ICAR. If the results are good, it will have to conduct bio-safety trials after obtaining regulatory approval. If safety to humans, animals and the environment is established in the trials, steps can be taken for commercial release.  (Two senior scientists of ICAR said Maralappanavar did not follow “procedures” and was persistent to the point of irritation).

Maralappanavar wishes her university had itself done this work. She regrets the loss of four cotton seasons. While she believes there is a commercial private sector conspiracy to sabotage her work, the reality may be less sinister. Professional jealousy seems to be more like it.