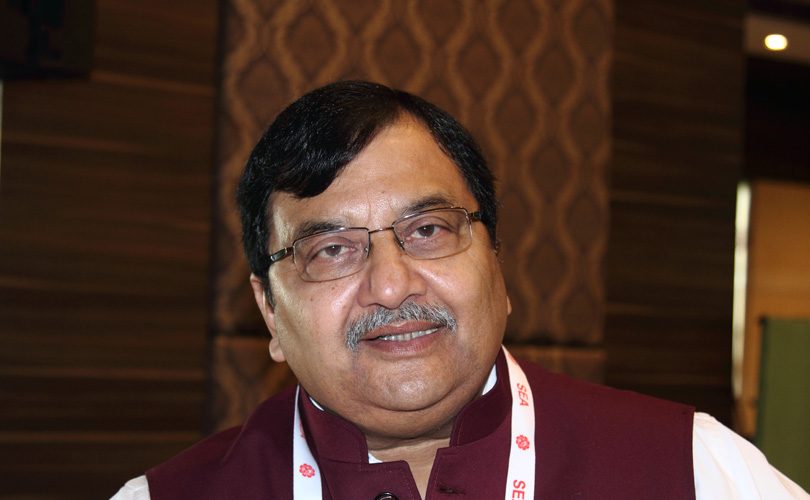 Atul Chaturvedi is President of the Solvent Extractors’ Association (SEA).  Until he retired last year, he was CEO of Adani Wilmar, a processor and seller of packaged edible oil under the Fortune brand. Chaturvedi is currently Director of Adani group’s agribusiness division and Executive Chairman of Shree Renuka Sugars. Vivian Fernandes caught up with him in Jaipur at SEA’s conclave on rapeseed-mustard on 8 July. Here is a lightly edited and annotated interview:

Vivian Fernandes: In your opening remarks at the conclave you said SEA’s Mission Mustard launched last year to raise annual output to 10 million tonnes from 6.5 million tonnes currently has not been a success. You are disappointed with the government’s response. What do you want it to do?

Atul Chaturvedi: The idea was to sensitize the government to the need to push mustard in this country. Mustard is one commodity which can be a game changer for the edible oil security of the country. We are currently importing about 15 million tonnes of oil a year.  (It was 15.6 million tonnes in 2015-6 and 14 million tonnes in 2016-17. Ed). We are surplus in wheat, rice, sugar and lately, pulses. We have been telling the government, or whosever listens to us, that Punjab and Haryana are producing an excess of wheat and rice which goes into storage. It does not make sense to keep on flogging them. We want 25 percent of the land in the two states to be diverted to maize during the Kharif season and mustard during rabi. This can be a game changer not only in terms of import substitution but also in helping the water table which is falling.

Punjab farmers prefer to grow wheat during winter because all the processes are mechanised. Mustard cannot be mechanically harvested with the harvesters used for wheat and rice. You need a different machine.

AC:  Providing machines is no big deal. You have to put a new attachment to the existing harvesters.

Punjab farmers are assured of wheat procurement. The government supplies wheat through the public distribution system. If it procures mustard what can it do with it?

AC: MSP (minimum support price)-driven production has done wonders for wheat and rice. You need to replicate the same thing in the case of maize and mustard. Specifically for mustard, industry will join hands with the government in buying mustard. The price differential, if any, the government must compensate which they are doing as of today. (Chaturvedi is referring to Madhya Pradesh’s Bhavaantar Bhugtan Yojana, where the state government pays farmers the difference between MSP and the average of modal prices at mandis. NITI Aayog has commended the scheme. Ed). If you keep import duties high, it doesn’t even need to pay that differential. The flipside is you must not do 180 degree turns at the drop of a hat, when market prices rise.  (Chaturvedi is referring to the government’s tendency for abrupt changes in the import and export policies of agri-commodities to keep consumer prices low. Ed).

When you say import duties should be sufficiently high, how high should they be? (The accompanying article on this page has the current edible oil import duty rates. Ed).

AC: Let’s face it. India is not a super-efficient producer of oilseeds for the simple reason that our land holdings are small.

That need not be a disadvantage. In China, the holdings are smaller but productivity is high. Smallholder farmers tend to give more attention to their crops.

AC: Our experience with castor is that if we can ensure better seed to the farmers and give them guidance in terms of what to do and what not to do it works wonders. In the plots where we have been experimenting, the yields have gone up by 20-25 percent, maybe more. (In the 160 target castor farms that SEA selected, the yield improvement was said to be 80 percent over farms that did not sow improved seed and adopt better practices. Ed).  Industry is willing to join hands with the government, provided it puts mustard in mission mode and involves the private sector.  Our association has domain experts.

What do you want to be accomplished under mission mode?

AC:  Increase the land under mustard. Reduce land under wheat and rice. Incentivize and disincentivize. That is don’t procure (wheat and rice in Punjab and Haryana) beyond a point. Jack up the support price of mustard so that farmers get enthused. If farmers are not enthused nothing big is going to happen. A classic example is both sugar and pulses. In pulses, India was deficient by a few million tonnes a few years back. The Government raised the import duties and jacked up the MSPs with the result that now you have a problem of plenty. Same goes for sugar. The sugarcane farmer will continue to grow cane because he is assured of the price. Similar interventions will have to be done for oilseeds.

We also need better technology. With the existing technology can we improve yields?

AC: Yes, they are available.

The seed replacement ratio in mustard is quite high.

AC: Our research institutes are second to none. But their interaction with the industry is zilch. If the user is not aware, you can produce whatever in your laboratory, but it has to be tested in the field.  Today also we are sourcing seed from government universities and it is much better than what you get in the market.

The higher MSPs announced on 4 July 2018, for oilseeds will not help?

AC: MSPs in oilseeds are relevant only for soybean. To consider groundnut as an oilseed is a misnomer. It is a dry fruit. India exports slightly less than a million tonnes of HPS (handpicked and selected) seed.

So the emphasis should be on mustard.

AC: The emphasis should be on mustard because it is a high oil-bearing seed. (The oil content of rapeseed-mustard ranges from 31 percent to 46 percent. Ed). Soya’s is about 18 percent. Mustard has a very strong consumption base in eastern and northern India. Whatever is produced will get sold.

You are supporting genetic-modification technology and the release for cultivation of the GM mustard hybrid, DMH-11?

Your employer (Gautam Adani) is supposed to be a good friend of the Prime Minister. He accompanies the PM on foreign visits. Can’t he persuade the PM (to release DMH-11 for cultivation)?

AC:  I don’t know whether he goes abroad (with the PM) or not. But he definitely has much more on his mind than mustard.

Why don’t you have a Mission Soybean?

That is because there is SOPA (The Soybean Processors Association of India).  We (SEA members) crush both soybean and mustard.

You think the future is in mustard.

AC: Yes, for this country the future is in mustard.