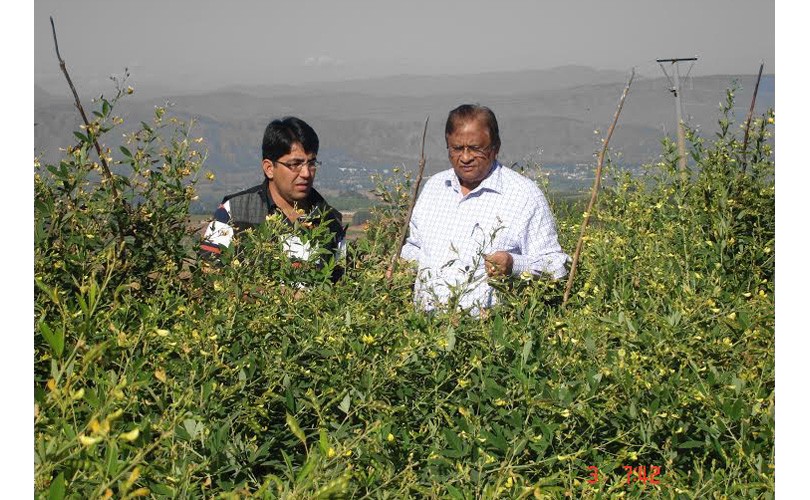 By using insecticidal gene technology to control pod borers in pigeonpea and chickpea, India can come closer to self-sufficiency in pulses and nutritional security, say Bhagirath Choudhary and C D Mayee. The technology has been successfully demonstrated in cotton. The authors want Indian regulators to be supportive.

The United Nations has declared 2016 as the International Year of Pulses. Why should western countries observe it, when they consumer very little of pulses, and grow it mainly for exports to India? We need Swadeshi Jagran for self-sufficiency and nutritional security.

The major pulses crops are chickpea, also called harbara or chana, which occupies 10 million ha out of the total of 25 million ha in the world. The second important pulses crop is pigeonpea or  arhar or tur which occupies around 4 million ha  and is mostly grown and consumed in India. The rest of the pulses like mungbean, urd bean, lentil, field pea and rajmash are considered minor pulses. They are cultivated in all on around 8-9 million ha. The total area under pulses is around 24 million ha and the annual production in 2014-15 was 17.3 million tonnes, or an average of 730 kg per ha. There has been no major breakthrough since independence. The current yield is far below the global average. Per person availability is just a fifth lower than recommended by nutritionists.

Imports of pulses surged by a quarter to 5.8 million tonnes in 2015-16, costing more than Rs 30,000 cr. The Indian Institute of Pulses Research (IIPR), Kanpur,  estimates demand at 27.5 million tonnes by 2025 and 39 million tonnes by 2050. Average annual yields would have to rise by 2.14 percent a year to 1,200 kg per ha.  Exporting countries know India will be short by 14-15 million tonnes annually and are planning their production strategies to fill the gap. An association of mills expects tur dal prices to cross Rs 200  a kg this year. The dal was retailing for Rs 150 a kg in Kharibaoli, Delhi’s wholesale market for pulses, on June 30.

Besides production woes, we have to battle policy incentives skewed towards growing cereals in irrigated areas, the low priority given to pulses by dryland farmers who tend to grudge even one or two supplementary irrigations, the lack of assured procurement despite minimum support prices (MSP) being announced, and significant losses caused by pests and diseases. The current MSP of Rs 35 a kg will hardly persuade farmers to expand areas under pulses.

Traditional breeding has improved productivity slightly by creating resistance in cultivars to key pathological diseases like wilt, sterility mosaic and blights but has failed to control damaging insect pests like pod borers which infest chickpea and pigeonpea crops. These borers belong to the bollworm family that ravages cotton.  Scientists at Assam Agricultural University (AAU) in collaboration with Sungro Seeds have successfully transferred the insecticidal Bt gene into chickpea using coding sequences obtained from the National Research Centre on Plant Biotechnology (NRCPB), Delhi, and the Commonwealth Scientific and Industrial Research Organization (CSIRO) , Australia. They have undergone limited field trials in Andhra Pradesh and Maharashtra. The results are encouraging. Yield increases of 25 percent are expected.

The scientific community is also excited about Bt chickpea and Bt piogenpea technology developed by IIPR. If regulators are not supportive with approvals for cultivation in farmers’ fields once they are assessed as safe, imports will drain dollars from the country and farmers incomes will be eroded.

The issue of self-sufficiency in pulses can be resolved by improving the genetic make-up of chickpea to fight the Gram-pod borer Heliothis armigera (Hubner), which is said to damage about half the chickpea pods. Uncertainty over the use of insect resistant (IR) technology needs to be removed so that scientists in both the public and private sectors are not discouraged.  Bt technology has been successful in controlling a similar pest, Helicoverpa armigera in cotton.

The insect resistant technology if commercialized can increase the yield of chickpea by nearly 300 kg per ha. The saving of 3-5 sprays can reduce the cost of cultivation by around Rs 1,200 a ha. Together  with increased yields, an additional income of over Rs 10,000 per ha can be earned. There will be a big reduction in the import bill as well.

Integrating Bt chickpea with the Rs 400 cr Pulses Programme  is critical to raising pulses production. Merely doling out funds to national and international institutions for creating seed hubs and distribution of mini-kits will not bridge the widening supply-demand gap.