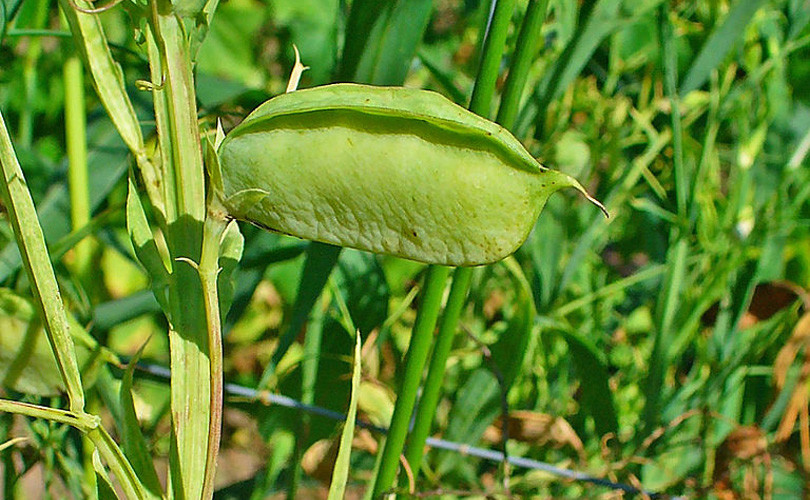 There are reports that the government is lifting the nationwide ban on sale and storage of khesari dal or grass pea, but there is no official notification so far. (We had earlier said the ban has been lifted – editor) The Congress Party has accused the NDA government of playing with the health of people. S L N Rao, a life-long researcher on khesari dal says in this blog that the amino acids in it, indicted for causing neurolathyrism when consumed in large quantities over long periods, would have health benefits if it becomes part of a normal diet. Rao, who was head of Osmania University’s biochemistry department, says he has eaten more khesari dal in the last five years than arhar or pigeon pea.

Khesari dal or grass pea is nature’s gift to mankind but it should be eaten as a meal accompaniment and not as a staple. In fact, no legume should be eaten as the main course.  As part of any normal diet, khesari dal can be highly beneficial but has been accused for all the wrong reasons.

Khesari dal has two non-protein amino acids, ODAP/BOAA (β-N oxalyl-L-α,β-diaminopropionic acid) and homoarginine. The latter has been found to be a normal metabolite even in humans by researchers in the past couple of years.  Its importance for human health─ cardiovasculature, bone health,pregnancy─ is growing.

ODAP is toxic to certain animals in high doses but not to common laboratory animals: rats, chicks and monkeys.  Humans can metabolize it completely as we discovered. This observation changed my perception of khesari dal and neurolathyrism. Khesari dal is safe for humans when it forms a part of normal diet. This is evident from the latest survey in Chhattisgarh. Even laboratory animals fed khesari dal in normal quantities do not show toxicity. Much time and effort has been wasted in this futile endeavour. It is time to put an end to it.

Nitric oxide (NO) is a vasodilator. (It dilates the blood vessels). Louis J Ignarro, Robert J Furchgott and Ferid Murad, who got the Nobel prize in 1998 have demonstrated why we must say ‘Yes to NO’. In our bodies nitric oxide is generated from arginine which is produced when proteins are hydrolysed in the body. But free arginine is a very minor constituent in foods. We showed that L-homoarginine, which is present in khesari dal (nearly 2%) is a better source or substrate for nitric oxide synthase leading to a sustained generation of nitric oxide because it stays longer in circulation in the body than arginine. This makes khesari dal a highly-prized commodity as it is the only known natural source for homoarginine. It could be a boon to those engaged in endurance sports and hard physical labour because it increases blood – and hence oxygen – supply.  Recent studies have shown that it could prevent strokes and hypoxia and improve bone health by slowing bone turnover and enhancing bone density. This suggests that people, especially elders, should include khesari dal in their diets. Studies have also shown that in the last semester of pregnancy there is a sharp increase in circulating homoarginine levels (as against that in the tissues). This is probably due to increased blood flow. So eating khesari dal could provide extra levels of homoarginine in addition to what is present under physiological conditions.

While Chinese medicine has used ginseng, the cure-all herb, for ages it has been shown recently to contain ODAP. The Chinese call it ‘dencichine’. This has rejuvenated and changed my thinking about khesari dal. We have shown that ODAP is an activator of the protein kinase C (PKC), a crucial regulatory enzyme in human metabolism. Among its many effects, is the activation of hypoxia-inducible factors (HIF) or genes to cope with low oxygen levels in the body. The team headed by Dr Surya Singh, my colleague at Osmania University was responsible for this discovery. Khesari dal can prepare you to face a hypoxic situation at high altitudes or even cope with stroke. Perhaps our brave soldiers in mountainous borders should carry khesari dal supplements. Activation of PKC also results in expression of other genes involved in neural and capillary growth.

We have also shown that ODAP is an inhibitor of the enzyme (tyrosine amino transferase, or TAT) which is associated with the metabolism of tyrosine and catecholamines. Khesari dal in daily diet would result in increased levels of catecholamines (DOPA, dopamine, epinephrine) in the body. The importance of DOPA, dopamine and other catecholamines for learning and memory and diseases of the central nervous system like Alzheimer’s and Parkinson’s is too well known. Some of these beneficial effects of khesari dal  are bound to make it a most important functional food and definitely not a killer pulse.

(Dr S Lakshminarayana Rao has spent a life time researching khesari dal or grass pea. His doctoral thesis at the Indian Institute of Science, Bangalore was on ‘the unusual amino acids of Lathyrus sativus,’ the botanical name of grass pea. Rao has held many research positions including at Cornell University, Boston University Medical School, Hyderabad’s National Institute of Nutrition, Canada’s Food and Drug Directorate and Hindustan Unilever. Before his retirement he headed Osmania University’s department of biochemistry. Rao and Singh have applied for a patent on ODAP through DRDO. Rao who lives in Bengaluru.  He has a website called www.lathyrustechnology.com)

This piece was published in the Financial Express on 22nd January.