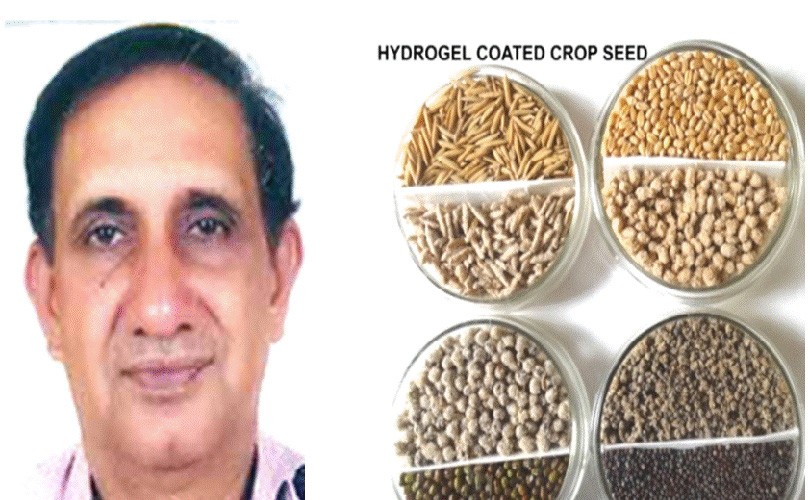 Project leader and Principal Scientist Virender Singh Lather writes about the technology his team has developed.

Punjab and Haryana did not traditionally grow rice because they were close to the Thar desert and rainfall was less than 650 mm. But rice cultivation has grown phenomenally from about four lakh ha in 1970 to 44 lakh in 2010 due to the introduction of dwarf high-yielding varieties during the Green Revolution, assured procurement by the government at minimum support prices and subsidized electricity, diesel and chemical fertilizers. Before the Green Revolution, rice, like other summer crops, was directly seeded. Weeding was done manually because the area under rice was small and labour was plentiful.

While the Green Revolution has ensured food security it has increased the consumption of pesticides, herbicides and ground water. Nitrates and phosphates from fertilizers have leached into the soil. Earth-warming methane emissions have increased because of the introduction of anaerobic (submergence) wetland rice farming systems or paddy transplantation.

To counter this, Punjab Agricultural University in Ludhiana and Haryana Agricultural University in Hisar in collaboration with the Australian Centre for International Agricultural Research (ACIAR) and Pepsico have developed improved Direct Seeded Rice (DSR) technology with emphasis on weed control with chemicals. But despite a government incentive of Rs 3,000 per acre, farmers have been slow to adopt it because of the menace of weeds caused by weekly application of irrigation and overdependence on herbicides. Many of those who adopted the improved DSR have reverted to transplantation.

The reasons for low crop yield in aerobic agriculture is low or erratic seed germination, poor seedlings-plant growth, dry matter accumulation and less moisture maintenance in the root zone against moisture-managed intensive agriculture. Hydrogels can relieve moisture stress in crops. Recent studies by the Indian Council of Agricultural Research (ICAR) and ministry of agriculture have demonstrated that hydrogels can save water, utilize it efficiently and produce more crop per drop. But synthetic hydrogels introduced for agricultural purposes in the early 1980’s have not become popular because of high cost (Rs 2,000 per kg), poor delivery system to root zones, and environmental concerns as most of them contain polyvinyl alcohols or polyacrylamides which are considered carcinogenic and non-biodegradable.

My research team at Indian Agricultural Research Institute (IARI), Karnal, has identified cost effective desi herbal hydrogels costing Rs 250 a kg (enough for an acre) and have developed farmer-friendly herbal hydrogel-coated seed technology (HHCST) for water conservation. It makes agriculture sustainable and resilient to climate change. We use locally-available natural gums (polysaccharides) of various plants which are also consumed as food like Gum Tragacanth (Goond Katira) and Gum Sterculia-Karaya . The cost can be further reduced by using organic Xanthan and other natural gums.

Hydrogel-coated seed showed delayed wilting of seedlings and mortality in rice (paddy) and wheat for about two weeks under laboratory conditions. The results were further re-validated in large-scale field experiments at the research station and in farmers’ fields on rice, wheat, barley, pulses, oilseeds and vegetable crops between 2014 and 2016. The results showed that herbal hydrogel Goond Katira coated seeds needed less water. The first irrigation could be delayed by 2-3 weeks in summer crops and 4-5 weeks in winter crops. With the application of pendimethalin as a pre-emergent weed killer, weeds are effectively controlled. With this technology water and energy consumption is reduced by half, there is a reduction in cost and environmental gains as well.  The incidence of pests and diseases is also less.

For further validation multi-location testing is being done by ICAR and other institutes. During the 2016 season farmers in Punjab and Haryana have shown keen interest. They have planted hundreds of acres with hydrogel coated seeds, showing that if the technology is useful, there is no need for subsidy.