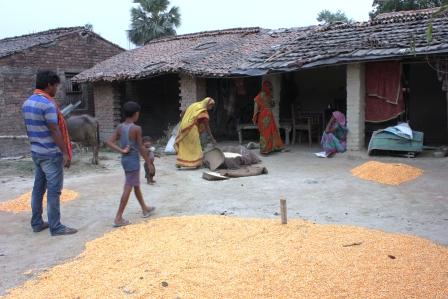 Speaking to Harish Damodaran of the Indian Express on 26 April, Balram Singh Yadav, Managing Director of Godrej Agrovet made it seem like the farmers of Bihar are thriving even though the state has dismantled regulated mandis or market yards administered by Agricultural Produce Marketing Committees (APMCs).  The company buys 70,000 tonnes to 1 lakh tonnes of corn or maize a year from the state  – it has fish, animal feed, poultry and dairy businesses. It buys through aggregators, Yadav said. They don’t bear the price risk. They assemble produce from small farmers and pass it on to the company at a price it determines. In turn, they get 1-1.5 percent of the value as commission for their services, including quality assurance.

According to ‘Agricultural Statistics at a Glance, 2019,’ an agriculture ministry publication, Bihar’s average rabi maize yield was 4.6 tonnes per hectare (for the three years ending in 2018-19) compared to the kharif yield of 2.4 tonnes per hectare. This pulls down the state’s average maize yield to 2.5 tonnes per hectare.  Rabi maize has less infestation of insects, pests and diseases, and weeds are also slow to grow. Large tracts of Bihar are under kharif maize.  They are prone to flooding; maize does not like too much water.

One of the reasons why Bihar rabi maize is picked up by private traders is because it is a lean season crop.

Yadav said that companies like his are daunted by licensing and documentation at APMC mandis. But are companies put off by APMCs? Not really. Traders at the regulated mandis don’t like competition so they create hurdles. But companies need not become members; they can operate through traders or commission agents to do the aggregation and buying for them. APMC mandis have large yards and facilities for aggregation, weighing, drying, grading and sorting. They also have dispute settlement mechanisms in place.

Bihar’s rice farmers – mostly small and marginal – suffer because there are no regulated market yards through which the government can procure rice. The state has a large marketed rice surplus says the Commission on Agricultural Costs and Prices but procurement is “negligible.” In the three years to 2018-19, 11.8 percent of the country’s rice farmers benefitted from rice procurement, but only 1.7 percent of Bihar’s rice farmers did, CACP says in its 2020-21 kharif season report. So there is distress sale of rice at prices much below the minimum support price.