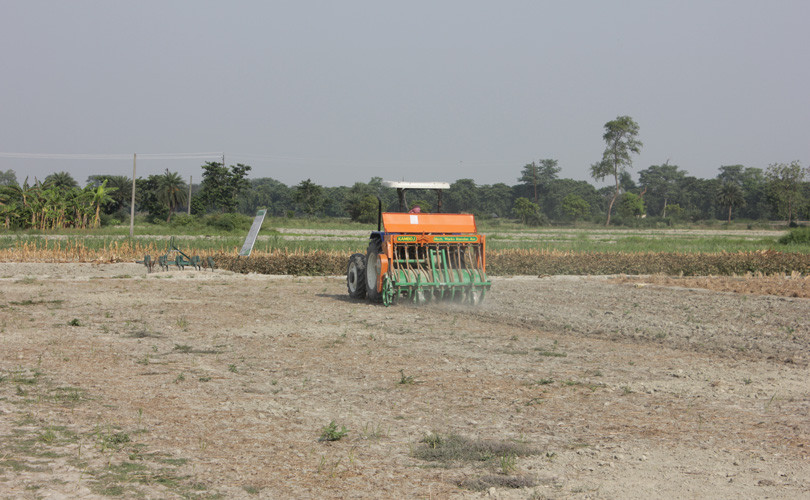 On 28 June, 2015, Prime Minister Narendra Modi laid the foundation stone at Barhi near Hazaribagh in Jharkhand for the Indian Agricultural Research Institute at  Goriya Karma, a little distance away.  ‘The second agricultural revolution must not be delayed,’ he said. ‘If there is a possibility of it happening anywhere, it is in …the eastern region of India.’

The location of the IARI was apt because the eastern states are both poor and agricultural. Studies show that at India’s level of development, growth in agriculture is much more poverty reducing that growth in manufacturing or services. And expenditure on research and extension has a greatest impact on agricultural growth – more than even investment in rural roads or irrigation.

The first IARI was set up at Pusa village in Samastipur district of Bihar. After an earthquake in 1934, it was shifted to Delhi; hence the name Pusa Institute. It was here that dwarf varieties of wheat imported from Norman Borlaug at Mexico’s International Maize and Wheat Improvement Centre (CIMMYT), were tested. After being found to deliver high yields, they were transferred to farmers’ field, resulting in India’s first green revolution centred in north-west India.

In 2010, Pranab Mukherjee as finance minister initiated a programme called Bringing Green Revolution to Eastern India. He allocated Rs 400 cr in the budget. This was to be spent on raising farmers’ income through productivity increases in rice-based cropping systems, bringing rice fallows under cultivation, and improving market access. The amount was enhanced to Rs 1,000 cr in 2012 and remains at that level this year.

Is not Rs 1,000 cr too thin when spread over 121 district in seven states: Assam, Bihar, Chhattisgarh, Jharkhand, Odisha, eastern Uttar Pradesh and West Bengal? K V Prabhu, Joint Director, Research of IARI says not.  He says the technologies are there; what is needed is outreach to farmers so they can adopt them and that does cost too much.

Eastern India is rich in water and its soil is not fatigued. There are significant yield gaps to be bridged. For instance, Punjab, Tamil Nadu, Andhra and Haryana have rice yields ranging from close to 4 tonnes per hectare to a little over three tonnes. Productivity in the eastern states is in the range of  a little over 1.5 tonnes to around two-and-a-half tonnes. As 24 million ha is under rice in these states, small increases can have a big impact on the country’s food grain production. In fact the share of these states in rice production has increased from 49 percent in 2010-11 to 53.75 percent in 2013-14, the Lok Sabha was informed in February this year.

The centre’s programme alone would not have brought about this change if states had not played their part. Even if farmers have the knowledge and the inclination to raise yields, they cannot or will not grow more if quality seeds are not available,  roads are terrible, there is no power to irrigate fields, wholesale mandis do not exist and government agencies do not procure at support prices. Bihar is proof that there can be no green revolution without better governance. When Nitish Kumar took over as chief minister, he fixed the law and order situation and invested in roads. Your correspondent, Vivian Fernandes, was pleasantly surprised to find the quality of roads as good as Gujarat’s. Though the rural power situation had improved, farmers had to depend on diesel pumps to irrigate their fields. But he also saw that when farmers are assured of good prices, they will find ways around problems. Bihar’s high productivity in rabi maize if testimony to this.

In an interview to Vivian Fernandes, Bihar’s Food Production Commissioner Vijay Prakash says the state had decided to raise its agricultural GDP much before  the cenre initiated BGREI and that it has caught up with the national average in rice productivity.

Here are edited excerpts of the interview:

How has Bihar leveraged its advantage in agriculture?

The government of Bihar realized that agriculture is the most important input that we can provide for reduction of poverty and we have a natural advantage, historically and geographically. The first road map came up in 2008. In 2012, we started a new one which will continue till 2017. We do not see agriculture in isolation. We are talking of a rainbow revolution (green, white and blue) that covers rice, wheat, pulses, oilseeds, dairying, poultry and fisheries.  We have to provide irrigation, access to markets and processing facilities. The investment envisaged between 2012 and 2017 is Rs 1,50,000 cr.

The programme, Bringing Green Revolution to Eastern India, is quite small in comparison.

Yes, BGREI is a small scheme in the total gamut that we are trying to attempt. It is an important input because it focuses on the green revolution. If we have to increase production and productivity of the country we have to really capture the potential existing in eastern India  and Bihar is one of the major states with a huge potential.

What have been the gains in rice productivity so far?

When the new government started (in 2004), Bihar’s rice productivity was half that of the Indian productivity. Now we have caught up  and have gone a bit ahead. The way we are going,  by the end of the road map, I am sure we will be quite near to the top few states.

Bihar has been promoting System of Rice Intensification, which is quite labour-intensive. Have farmers taken to it? (SRI is a labour-intensive method adopted from Madagascar. The seedlings are first raised in nurseries. They are re-planted manually, when eight to 12 days old, with 25 cm spacing between plants and rows. The space between the rows is puddled with a machine for water to stay. De-weeding is done with a hand-operated machine. The field is alternately irrigated and dried – Ed.)

Initially there was a very good response but with labour becoming quite costly it is not picking up the way it should. It is still an important component of our endeavour to increase productivity.

What have you done to ensure that farmers get quality seeds?

There was a great problem of seed. We revived our seed corporation. We have stabilised seed production but we  have to consolidate and modernise our seed production units. Hybrids we are not producing ourselves; we are facilitating their use by providing farmers a subsidy to buy them.  We have droughts and floods on a recurrent basis. North Bihar faces floods quite frequently and we have droughts in South Bihar. We are going in for crop diversification and are planning to have seed banks ready in case there is scanty rainfall. Bihar was the first state to introduce diesel subsidy to fight droughts. That has brought us good results.  We have stabilised our paddy production to a great extent.

Since the monsoon has been acting up, one of Bihar’s two chief scientists for rice, N K Singh of Rajendra Agricultural University, Pusa, has been advocating direct seeding of rice (DSR) and telling farmers to grow rice as if they were growing wheat.

We are emphasising both transplantation (SR) and DSR. DSR is useful only in the uplands where there is no water logging. Any technology which can be sustained and which can give results we are promoting that.

Any emphasis on pulses and oilseeds?

Pulses and oilseeds are our concern but we have not been able to achieve as much as we had envisaged. We have to stabilize our seed supply and production.

In many areas of Bihar, farmers get less than the minimum support price  because there is no procurement by government agencies.

The government has decided to do large-scale procurement. We have succeeded to a large extent. In the last few years we procured to the tune of 25 lakh tonnes every year. But there are problems like storage.  The road map addresses the issue but we have to do a lot.

(Top photo: Direct seeding of rice at the Borlaug Institute for South Asia, Pusa, on 3 June, 2015. Photo by Vivian Fernandes)