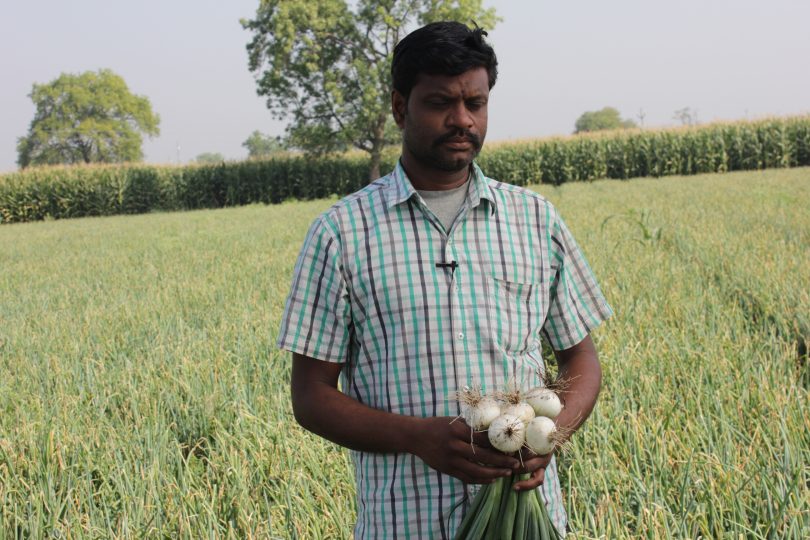 Onion prices slid at Maharashtra’s main Lasalgaon wholesale mandi on Monday  (9 December) with arrivals double the daily quantity brought in last week.  Supply was augmented, observers said, by imports and by farmers harvesting their crop before maturity to grab prices while still high.

The maximum average price was Rs 6,800 a quintal and the modal price, or the rate at which the most trades took place, was Rs 4,500 a quintal as 10,800 quintals of onions arrived in the market on Monday.

The arrivals have improved substantially from just 1,500 quintals on 29 November.

Farmers may have been spurred into early harvesting with news of retail prices touching Rs 160 and Rs 200 a kg hitting the headlines. Private imports of about 6,000 tonnes are said to have started arriving. The state-owned MMTC has also floated three import tenders. The earliest, which expired on Monday, 9 December, was for 5,000 tonnes from Turkey to be supplied between the 17th and 30th of this month. Two other tenders are for open-ended quantities, but for a minimum supply of 100 tonnes, one from the European Union, and the other from any destination.

In November, the government had directed MMTC to import one lakh tonnes of onions. Indian embassies in Afghanistan, Iran, and Egypt were told to facilitate them.  MMTC had first placed import orders for 2,000 tonnes in September but did not get any bids.

The Modi government has tried to appear in control. It withdrew export benefits for onions exporters in June. It started buffer stocking operations in April and May. Limits on the amount of stock that traders could hold were placed in September. On Monday, retailers were directed not to stock more than two tonnes, down from the earlier limit of five tonnes.

Exports below a certain price were not allowed and then banned. There are reports of traders being whipped into behaving with income tax raids.

The government was not caught napping though one does not get a sense of crisis from the monthly production and price monitoring reports of the ministry of agriculture and the department of consumer affairs. An October report said overall 7 percent less area had been planted with onions, the reduction being 58 percent in Madhya Pradesh, 18 percent in Karnataka and 2 percent in Andhra Pradesh due to heavy rains. The reports said the crop in Maharashtra was ready for harvesting but delayed because of incessant rains. There was a big shortfall in arrivals in September and October than during the corresponding months last year.

A combination of weather events played the spoiler this year. The Rabi crop which is harvested just before the rains and keeps the longest till November and December got spoilt. The crop was harvested ‘Immaturely” because of a drier and hotter summer, says Yogesh Thorat, Managing Director of Maha-FPC, a Maharashtra state-level consortium of farmers’ producer companies (FPC).  This produce stored in open, ventilated storages on farmers’ premises developed fungal infection because of high humidity caused by incessant and prolonged rains.

Maha-FPC had procured 25,000 tonnes for state-agency Nafed’s buffer stock from April onwards. The operations covered about 200 villages in seven districts. Onions were bought from 39 member FPCs and stored in about 600 storages rented from farmers. But stock running into a few thousand tonnes had to be thrown away because of spoilage. This was a common state-level experience and not peculiar to Nafed, Thorat said.

Planting of the Kharif crop was delayed because of late arrival of monsoons. The subsequent downpour destroyed that harvest. The second, late Kharif crop was damaged as heavy rains destroyed the seedling nurseries. This has also affected planting in the third, Rabi season, which accounts for 60 percent of the annual onion production.

India is the second-largest producer of onions after China. Annual production in the past three years has averaged 22.36 million tonnes. This is almost double the annual average output during the three years ending 2007-08. Productivity has increased by 14 percent to 17 tonnes per hectare during the period. Much of the production increase is due to expansion in area.

The Indian Council of Agricultural Research (ICAR) claims credit for this. “Seventy percent of the varieties grown in the country are those of ICAR, “says its Deputy Director-General (Horticulture) A K Singh.  He says an effort is on to promote cultivation in new areas like Punjab (which accounts for the highest consumption), the North-east, Leh and Ladakh and eastern Uttar Pradesh to avert transportation over long distances. He talks of encouraging results in about 200 hectares across a couple of villages in UP’s Mirzapur district. Punjab farmers have not been so keen, he says.

Onions are a low- value crop. Farmers do not often get good prices. Ganesh Nanote, a progressive farmer from Akola says he produced 150 quintals on two acres last year and sold it for Rs 400 per quintal. While he recovered the cash expenses, he did not get compensated for his own labour. This year, he has not grown onions expecting a glut as farmers rush in lured by prevailing high prices.

Santosh Gorade, 38, a farmer from Takali Vinchur village in Nashik’s Niphad taluka said he was able to plant just two acres this monsoon season against about 6 acres last year because the rains damaged the seedlings and he had to replant with whatever little seed was left. Against 110 quintals an acre, Gorade expects a harvest of 40 quintals. The prevailing high prices have not benefitted him, he said. He has just started harvesting. Last year he had dumped onions around this time as they were selling for so low he would not have recovered the cost of transportation.

Singh says farmers have gained handsomely. A video he shot while on a visit to Pune, shows a farmer telling him he had sold at onions at Rs 80 a kg at the farm gate. But such farmers are few.

Thorat says storage technology needs to be improved so that onions keep longer. He says ICAR should do demand-driven research. He is disappointed with the institute for not producing seed in enough quantities. It has also not helped him with storage technology either citing lack of research staff. (Maha-FPC is setting up 25,000 tonnes of storages at 25 locations in partnership with Nafed and the state government). Singh says storage technology research is not strictly its mandate but the Directorate of Onion and Garlic Research at Rajgurunagar in Pune has improved upon the existing open, ventilated storages to reduce losses to 10 percent. Since the water content in onions is high, both high heat and high humidity spoil them.

Some experts have suggested dehydration of onions as a way of relieving the shortage.  But KB Patil, Senior Vice President of Jain Irrigation at Jalgaon in Maharashtra, says Indians prefer fresh onions. Dehydration costs about Rs 25 a kg. The company supplies dehydrated flakes to pizza chains and the military. It has about 5,000 farmers on contract.

India produces more than it needs. The focus should now shift to improving the shelf life of onions and to storage technology. Getting farmers in new areas to cultivate the crop will help reduce the impact of erratic weather on production.

(Top photo of onion farmer in Jalgaon by Vivian Fernandes)