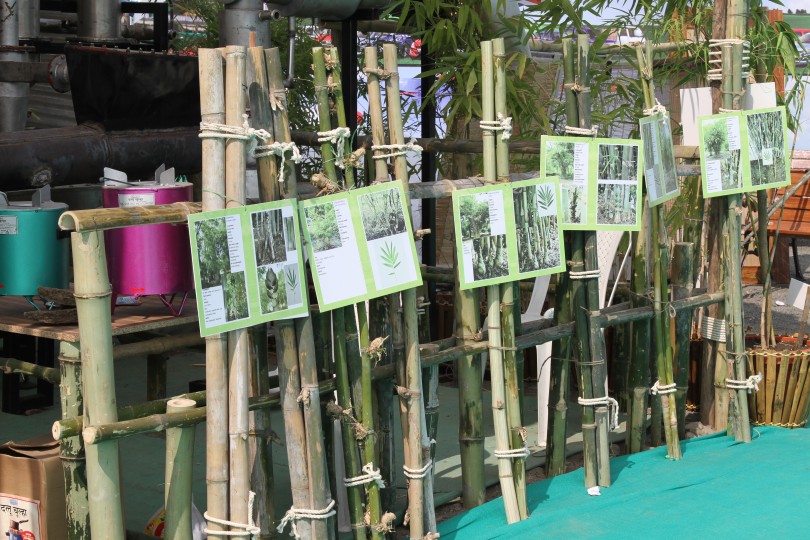 How about planting bamboo extensively along the banks of the Yamuna to sequester the carbon from Delhi’s vehicle emissions? According to the World Bank, India’s per person emission of carbon dioxide was 1,730 kg a year in 2014. Another website says this has risen to 1,900 kg in 2016. Bharathi Nambi, a scientist says it will take just five bamboos a year to make an Indian carbon neutral because each of them absorbs about 400 kg of CO2 a year.

Nambi is an agricultural scientist who had been doing research in tissue culture for about 35 years. About 15 years ago he developed a high density bamboo variety called Beema (Bambusa Balcooa). At that time India’s average yield was about half a tonne per acre. Through tissue culture and fertigation this has risen to 40 tonnes per acre. Nambi is the founder of Growmore Biotech and has a tissue culture lab and farm at Hosur on the Karnataka-Tamil Nadu border. He sells 10 million bamboo saplings year, each priced at Rs 30.

Dense planting of bamboo on the banks of the Yamuna, he says, will not only absorb CO2 but also bring down particulate matter. The plant is an “excellent scavenger,” he says; its roots do not go below two feet, so it can absorb rich nutrients in raw sewage that flow untreated into the Yamuna and raise its bio-oxygen demand. During rainy season, the clumps will slow the flow and reduce the chances of flooding downstream. Submergence does not affect the plants. There will be economic benefits in the form of employment and income.

Nambi says Infosys has planted 30 acres of bamboo in Bangalore, to reduce its carbon footprint. I have not studied the pro and cons, but Nambi’s idea needs serious study.

Bamboo can growth in dryland areas, but it yields best when well irrigated. Bamboo requires the same amount of water as sugarcane, about 10-20 litres per day per plant. Conventionally about 200 of them are planted per acre. In medium density planting the number rises to 500 and in high-density planting the number is doubled to 1,000  plants per acre.

To reduce water and fertilizer consumption, Nambi advises a drip system for both irrigation and supply of soluble fertilizer. According to him, the initial cost is Rs 14.39 lakh per 10 acres for land preparation, soil improvement, sinking a well, weeding, fencing, laying a drip system, ploughing, digging pits and installing an electrical pump. Fencing is important because wild boars find the juicy rhizomes a delicacy till they harden in couple of months. The cost per 10 acres rises from Rs 3.26 lakh in the second year to Rs 4.40 lakh in the fifth year and stabilizes at that rate.

The harvesting begins in the third year with 297 tonnes per 10 acre. Yields remain steady at 400 tonnes per 10 acres from the fifth year onwards. At Rs 4,000 a tonne (for sun-dried 15 percent moisture bamboo), Nambi says the net income from such a plantation will be about Rs 70 lakh over 10 years.  He says bamboo is more profitable than rice and sugarcane.

Nambi manages a 5,000 acre bamboo plantation in Tamil-dominated Vavuniya in Sri Lanka to feed a power plant. He says it is a better alternative to coal. A kg of bamboo produces 4,000 kilocalories compared to 3,000-5,000 kcal for coal. The cost is comparable, he says, but bamboo has 1 percent ash content, compared to coal’s 10-30 percent which poses a problem of disposal. It also emits no sulphur.

The government is keen to promote bamboo cultivation. On 23 November it issued an ordinance to categorise cultivated bamboo as non-forest produce that can be transported without transit permits.

Maharashtra had stolen already march in April. It is quite keen on promoting bamboo as a source of income for farmers. In August last year it created the Maharashtra Bamboo Development Board (MBDB) for this purpose.

India has the largest area under bamboo ─ 11.4 million hectares, says TSK Reddy, the board’s managing director. But, as often is the case China makes the most of it even though it has a smaller area ─ 5.4 million ha ─under the “grass.” Its last annual exports were worth $19.5 billion against India’s $4.5 billion, says Reddy in a conversation at minister Nitin Gadkari’s agricultural fair, called Agrovision, in Nagpur.

Much of India’s bamboo is in forests. Reddy wants it to be cultivated. He says 23 value-added products can be made from it. At the fair, Vice President Venkaiah Naidu, who did the inauguration, was presented with a white shirt made of bamboo fibre.

There is a big market in the agarbatti industry. Reddy says India imports 35,000 tonnes of round sticks from Vietnam and China. Earlier, square ones were hand made from bamboo, in the north-east. But when the technology changed and machines took over, round sticks were preferred. India produces 3,000 tonnes of them, according to Reddy. He sees ‘engineered bamboo’ becoming a substitute, but perhaps not replacing, timber.

There are about 1,200 bamboo species of which 136 are in India. The National Bamboo Mission has identified 16 for commercial purposes. The board has chosen five of them: Balcooa, Brandisii, Asper, Nutans and Tulda. It has joined hands with Bengaluru’s Indian Wood Science and Technology, a government institute. The institute has developed protocols for eight bamboo species.

The board wants to encourage large block plantations. Farmers will be supplied tissue cultured saplings. It will source them from three laboratories including Growmore Biotech. Reddy says about 700 farmers in Maharashtra have given their consent. Each of them owns about 4-5 acres and will grow bamboo on plots that are currently uncultivated. They will need to invest about Rs 2 lakh per acre for fencing and drip irrigation. The board is working with Nabard and State Bank of India to provide loans to them, with a three-year moratorium on payment of interest, and repayment over five years thereafter.

Bamboo can tolerate both heavy and low rainfall. Every year it gives out eight to 10 shoots. Reddy says a plantation of Balcooa bamboo in Maharashtra’s Gadchiroli district yielded 18 tonnes an acre at the end of the third year, 25 tonnes by the fourth and 60 tonnes in the fifth. The board has an understanding with Ballarpur Industries, a paper company, to buy bamboo at Rs 3,500 per tonne or the market price, if higher, from the farm gate. At that rate, the Gadchiroli plantation would have earned Rs 63,000 an acre in the third year going up to Rs 210,000 an acre in the fifth. A plantation of flowering bamboo species has an economic life of about 30 years but if the bamboo is sterile, like Beema, it lasts forever.

This report was first published in the Financial Express.

(Top photo of cultivable bamboo species on display at Maharashtra Bamboo Development Board pavilion at Agrovision in Nagpur, November, 2017. Photo by Vivian Fernandes)