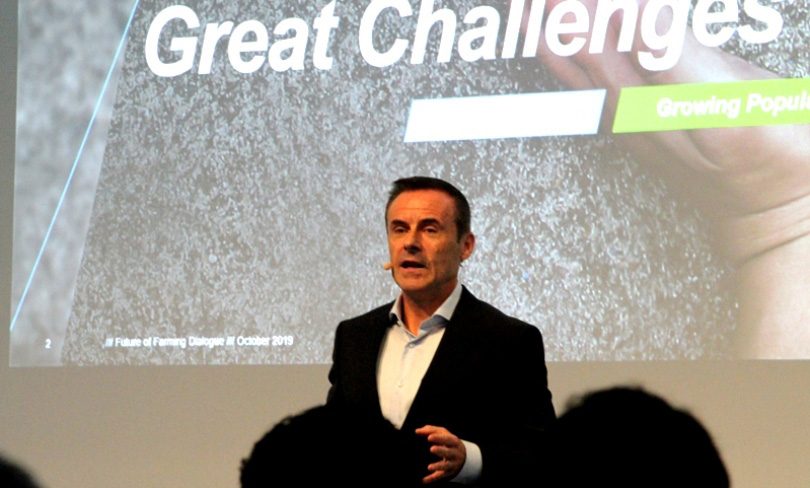 At its Future of Farming Dialogue held over two days in Germany, Bayer impressed upon “influencers” — farmers, academics, industry experts, activists and journalists  from 40 countries — that sustainability would gird its seeds, traits and crop protection businesses and that it had ambitious commitments to reducing their impact on biodiversity and earth-warming emissions. 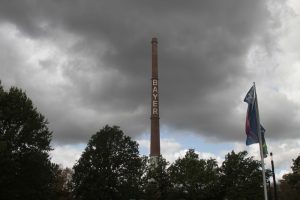 Towards low emissions: a smoke stack from the past as Bayer’s HQ in Leverkusen.

Emphasizing that “Agriculture needs to feed a growing world without starving the planet,” Liam Condon, Member of Bayer’s management board and President of its Crop Science Division said this would be achieved both through incremental improvements and breakthrough innovations.

Condon said the company would reduce the impact of its crop protection chemicals by 30 percent; cut greenhouse gas emissions from the most emitting crops in the regions Bayer serves by 30 percent; and provide 100 million smallholder farmers in developing countries access to its ‘sustainable’ agricultural solutions.

Mathias Berninger, the company’s head of public affairs and sustainability (a former Green Party MP), said these obligations would be met by 2030. They would be overseen by a Sustainability Council which would have outside experts and would do an annual review.

Giving an example of how the impact of crop protection chemicals can be reduced, Klaus Kunz, Head of Sustainability at the company’s crop science division cited Movento, a proprietary pesticide against citrus plant-sucking pests which required 70 percent less active ingredient per hectare and therefore had 70 percent less environmental impact.

An improved version of herbicide-tolerant soybean planted across seven million acres in Latin America would give 20 million tonnes of incremental yield by preventing yield losses through weed control.  Lesser land would mean fewer forests cut. Condon said this would conserve 20 million litres of water annually.  Herbicides also made no-till agriculture possible. The averted tractor use would result in lesser emissions equivalent, he said, to keeping three million cars off the road. No-till agriculture would prevent the erosion of soil, enrich it with organic matter (from crop residue left to decay in fields) and allow soil microbes to thrive.

Skeptics might see herbicides and Bayer’s Glyphosate brand Roundup as well as Roundup Ready herbicide-tolerant crops as harming biodiversity and not helping in. A powerful voice against ‘sustainable intensification’ at the event was that of Miguel Altieri, an entomologist and professor at the University of California – Berkeley, who made a case for “aligning agriculture with ecology.” He wanted “natural control mechanisms put in the hands of farmers.”  He cited some examples of Andean farming practices which were based on insights gleaned from centuries of collective experience.  “Farms surrounded by hedgerows have lesser pest attacks,” he said,” because hedgerows nurture beneficial insects.”  For him crop protection products were “No.5 in the pecking order.” The systems we have today, he said, were input dependent.  He said the emphasis should be on prevention rather than cure.

Another innovation was short-stature corn. It is an improvement over tall corn hybrids. By not lodging or falling over when strong winds blow, it would avert yield losses. Spraying with tractor-mounted pumps would be possible, obviating the need for energy-intensive aerial spraying on very large fields. (But Rob Sharkey, a podcaster and Illinois farmer who grows corn and soybean on 2,200 acres pointed to an unintended consequence: the stalks of short-stature corn did not degrade easily and therefore were not suitable for no-till agriculture. He said he had to employ machines to chop the stalks and plough them into the soil. He clarified that he had planted a local hybrid). 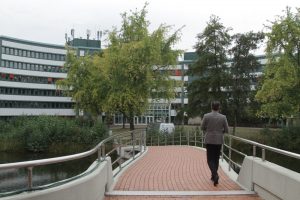 Bayer which has been propelled to the top position worldwide in the seeds, traits and crop protection markets through its acquisition of Monsanto, is also betting big on digital technology.  Climate Corporation which it obtained through the acquisition is driving that change.  Climate Corp’s Chief Scientist Sam Eathington said each field is unique.  By analyzing the soil content of a field it was possible to plant hybrids (and non-hybrids) that best suit it.  Precision application of fertilizers and protective chemicals depending on crop characteristics was possible. In one pilot project where different fields were planted with the appropriate corn hybrids, there was a yield increase of half a tonne per acre.  “In digital, we are still early but it will be more profound in its impact,” Eathington said.

The two-day event was held at Leverkusen and Monheim, where the head office of Bayer and its crop science division respectively are located. Condon said the new technological developments could enable an outcome-based business model. Instead of being paid for inputs, Bayer might make recommendations to farmers about the seeds they must plant, the fertilizers and protective chemicals they must use and the agronomic practices to follow.  In return it would get a share of the upside but would take a cut if the output fell short.  “We are trialing this in the US,” Condon said. “We are taking out some of the risk.”

Some farmers may resent the loss of autonomy but others might welcome it.

(Top photo of Liam Condon.  All photos by Vivian Fernandes, who has also reported this story. He was at the event at the invitation and expense of Bayer).