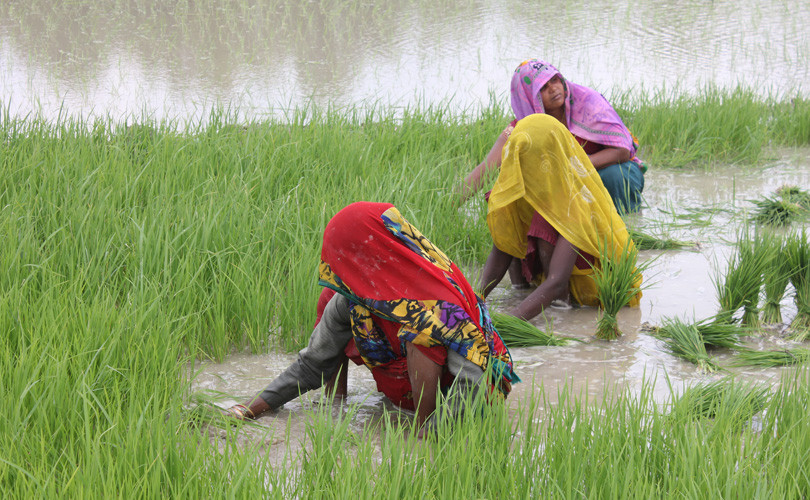 Anti-GM activists have maligned the Indian regulatory system for approval of GM crops, but Saidur J Rahman, Member of the Review Committee on Genetic Manipulation contests the charges and spells out how rigorously the field trials are conducted. This report by Vivian Fernandes is based on his speech at a workshop at Indian Agricultural Research Institute in New Delhi. (Top photo is an allusion to the shame and embarrassment Indian GM regulators feel when dirt is thrown on their integrity!)

‘The Indian regulatory system for GM crops is one of the most robust in the world’ says Rahman, who is also principal scientist at Professor Jayashankar Telangana State Agricultural University (PJTSAU) in Hyderabad. RCGM is the apex body under the department of biotechnology in the ministry of science and technology. It is a technical committee which prescribes protocols for research in genetically-modified crops and their safety trials.

‘We feel ashamed, we feed embarrassed when we hear that the regulatory mechanism is not working in India for the purpose of GM crops,’ Rahman said. Former environment minister Jairam Ramesh had imposed a moratorium on Bt brinjal five years ago (10 Feb 2010) alleging deficiencies in safety trials and the regulatory mechanism. A committee of the previous Lok Sabha headed by Communist MP Basudeb Acharia and the Technical Expert Committee appointed by the Supreme Court comprising those opposed to GM technology had also called for an indefinite ban on field trials citing the same reasons, though the SC did not heed their advice and field trials of GM crops have been allowed by four states.

At every step of the regulatory process there is a fifty percent possibility of stopping a trial,’ Rahman

said. The standard operating procedures have to be followed. The questions are structured such by the Central Compliance Committee that the boxes can be only ticked  ‘Yes’ or ‘No.’ Except on one page where additional information is sought, the maximum that can be said by way of discretion is that a particular query is not applicable. ‘So nobody can show English language efficiency. Nobody can show their diplomatic writing,’ Rahman observed.

The most powerful body in the regulation of GM trials, according to Rahman, is the State Biotech Compliance Committee headed by the chief secretary with the principal secretaries for agriculture and environment as members. It has specialists from the state agriculture universities, the traits under trial determining who they will be (an entomologist if insect resistance is under test or an agronomist if a crop is being tested for herbicide tolerance). In many states these committees are defunct because of which field trials cannot be held. State agriculture universities also hesitate to hold GM trials for fear of inviting civil society censure. The trials are expensive because for one year after GM trials the plot has to be without vegetation but farm operations like irrigation and weeding have to be done because the manual says there should be post-harvest monitoring of plants for one year. ‘Good or bad, this is the rule we are following,’ Rahman said.

Records of transportation and storage of genetically-modified material, the management of confined field trials, and compliance with harvest and post-harvest regulation have to be maintained. These procedures curiously are ignored when new hybrids or varieties are developed using conventional plant breeding methods. Without the signature of state officials, the CCC report cannot be submitted even if the chairman and members are of high repute. There are instances where visits by the CCC have been postponed because state officials were not present.

Rahman said he had stopped a trial from moving to the next stage even though the GM crop area was ‘excellently maintained’ because the border areas meant to absorb pollen from the crop were not. ‘As a scientist I feel what we are doing is wrong, but still the rule is there and that is the utmost care that is being taken without mercy.’  He admitted to the possibility of rules being followed without seriousness.  For example, weeding of a plot where GM field trials were held might be done just when CCC members are visiting.  ‘The answer can be only to tell that we should feel happy that they are doing it. The rules are there but we have to depend on the sincerity of people who are doing the trials.’

The manner of conducting the field trials behind fences itself feeds public apprehension. The fences, the sentries and the the detailed information posted on yellow boards send the message that ‘itna ho raha hai to kuchh to hoga andar’ (something must be cooking if there is so much fuss). The only things that are missing are guns and the skull and crossbones sign. ‘You see CCC members moving about within the fenced fields with a guard as if they are in a jail. These things create unnecessary doubts,’ Rahman asserted.

The professor cited an example of a trial which was affected by floods. Despite the developer informing the regulator that it wanted the trials closed the CCC members went to the site at the developer’s cost to verify for themselves that the trials were indeed vitiated, and that the material under trial had been properly disposed of.

Rahman said more crops with herbicide tolerance traits were being developed in India than those for insect resistance. The latter, based on Bt technology, should be welcomed by those who are concerned about the environment because it eliminates pesticide sprays. ‘Bt cotton has benefited famers and uplifted them economically,’ Rahman observed. ‘As an entomologist and as a bio-control scientist I can say that because of the introduction of Bt cotton pesticide consumption in India has come down.’ If someone argues against it there are data to prove otherwise, he said. In Andhra Pradesh the cotton crop used to be subject to thirty sprays.  These have become unnecessary after Bt cotton was introduced. But spraying is being done to control sucking pests. ‘Definitely we need to go into the cost economics and point out that we cannot blame it on GM technology but in a holistic way we need to address the problem.’ The criticism that Bt technology does not increase yields is not valid, because Bt is ‘not a production gene; it is a protection gene.’

Rahman was ambivalent about rendering crops tolerant to herbicides, though he acknowledged that weeds were a ‘major problem’ and labour was not readily available.  Herbicide tolerance encourages use of chemicals (herbicides) while Bt technology discourages it.  For instance, US multinational seed company, Monsanto, has the patent for of the gene that makes plants resistant to the herbicide Glyphosate.

But Ajit Ram Sharma, Director of the Directorate of Weed Research in Jabalpur says, ‘Glyphosate is a wonder herbicide and without use of this herbicide this agriculture cannot be practiced.’  Sharma was referring to conservation or no-tillage agriculture which DWR is pushing hard in Madhya Pradesh. ‘In fact, we recommend applying it because before sowing whatever weeds are in the soil need to be killed. And Glyphosate and Paraquat are the only two that are available.’

Rahman wanted the charge that Bt protein leaches into the soil and affects soil micro-organisms to be proved scientifically. It should not always be taken in a negative way, he said. If it leaches and control micro-organisms like fusarium (moulds that cause plant diseases like wilting and toxins that affect human health when they enter the food chain) ‘we should feel happy.’ If it controls trichoderma (fungal strains used as biological control agents against pathogens) applied to the field to control fusarium we should be worried. There must be unbiased soil micro-flora profiling. Further information is definitely needed in this area.