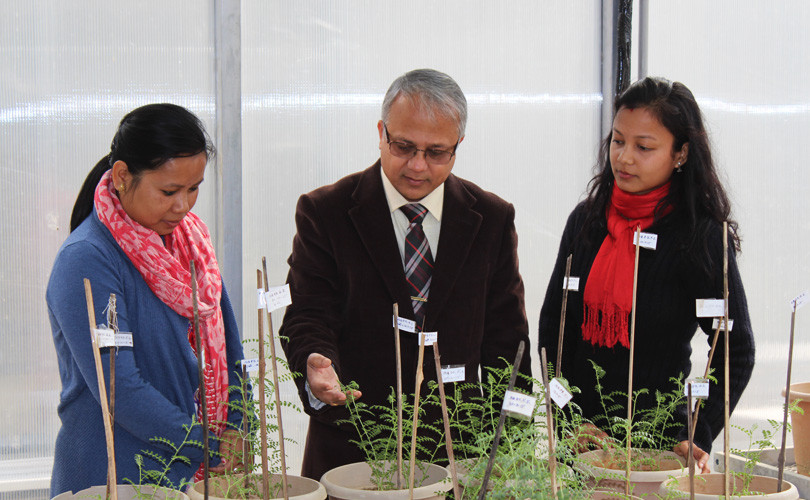 Assam Agricultural University’s Bt chick pea which is resistant to pod borers has been licensed to a private seed company and four public institutions. If safe and approved for cultivation, it can relieve the shortage of a dal which is the most consumed in India. But state governments are behaving as if they are spoilt for choice, reports Vivian Fernandes.

Among the state institutions working on transgenic crops is Jorhat’s Assam Agricultural University (AAU) whose Bt chickpea is being tested by Sungro Seeds, Delhi, in Kurnool and Kadapa districts of Andhra Pradesh for risks to humans, animals and the environment. Sungro is part of the Barwale group, whose flagship is Maharashtra Hybrid Seeds Company (Mahyco), which has partnered with Monsanto to bring Bt cotton to India.  The Bio-safety Research Level-1 trials were done in these districts in rabi 2014 and again in 2015 Director of AAU’s Department of Biotechnology Centre, Bidyut Sarmah said. They have not been completed. In Maharashtra permission for field trials came in early 2015, well after the planting season (November). Since then, the Devendra Fadnavis government has joined many states in suspending field trials of all genetically-engineered crops, after initially approving them.

The transgenic chickpea has been developed using two insecticidal genes that kill pod borers. The coding sequence for Cry2Aa was obtained from the National Research Centre on Plant Biotechnology (NRCPB), Delhi, and that of Cry1Ac was synthesized at the Commonwealth Scientific and Industrial Research Organization (CSIRO) of Australia. Both are collaborating institutions of AAU for the chickpea gene technology programme.

The work began in 2000 and ‘useful transgenic lines with complete protection against pod borers’ were developed in 2008, Sarmah said.  The technology has been licensed to Sunagro Seeds, Indian Institute of Pulses Research, Kanpur, Punjab Agricultural University, Ludhiana, the University of Agricultural Sciences, Dharwad and Icrisat, a Hyderabad-based international institute which specializes in agricultural research for the semi-arid tropics.

Genetic modification is necessary because there is ‘no good available resistance in local varieties’ of chick pea to pod borers, C L L Gowda, former Deputy Director-General of Icrisat said.  He estimated that about 30-40 percent of chickpea lost to pod borers could be saved with transgenic lines. This will go a long distance in alleviating the shortage of pulses. Chickpea is the largest consumed dal in India.

The other transgenic that Sarmah’s team has developed is chickpea with resistance to bruchids or stored grain pests. A gene obtained from rajma blocks the action of the enzyme α-amylase which larvae need to digest starch. With this inhibitor gene larvae die before they bore into chickpeas where they would have grown into adult flies.

This transgenic variety was actually developed (in 2004) before Bt chickpea but strangely there has been no commercial interest in it so far. The developers, that is AAU, also seem to think that science and marketing cannot mix. The project was funded by McKnight Foundation, a family charity based in Minnesota, USA, which among other things funds international crop research.  In the absence of bruchid-resistant chickpea, Sarmah said people were at risk of ingesting pesticides sprayed on them because of the practice of eating soaked chana, prevalent in many parts of the country, included Assam.

(Top Photo: Bidyut Sarmah with his team members in AAU’s greenhouse with Bt chick pea. Both photos on this page courtesy of Bidyut Sarmah)