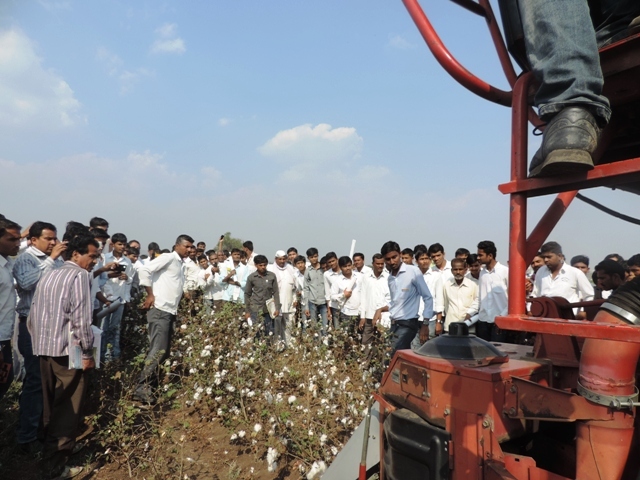 Corporates are preparing to introduce cotton which can be picked by machines, as farmers battle labour shortage and rising production costs. Vivian Fernandes reports on a demonstration of machine picking at an experimental state university farm in Maharashtra’s Parbani district. This report was first published in www.firstpost.com with the same title on 16 March, 2015.

An imported cotton-picking machine in action at state ag university in Parbani, Maharashtra on 12 Feb, 2015.

At a state agricultural university in Maharashtra’s Parbani district, next to Aurangabad, Monsanto, a multinational seed company and New Holland Fiat (India), an MNC producing agricultural machinery are demonstrating mechanized picking of cotton to farmers and agricultural officials.  The subsidiary of Indian crop sciences company Mahyco, in which Monsanto also has a minority stake, and John Deere a US farm equipment maker also are collaborating separately for the same purpose.

The promotion of labour displacing machinery may seem out of sync with trends in agri-commodity prices and growth in rural wage rates. The FAO’s world food prices index for February dropped to its lowest in 55 months. The growth in rural wage rate at 3.8 percent in November last year was the lowest since the peak of 20 percent seen in 2011, according to India’s Labour Bureau. Cotton prices in Aurangabad mid-February, when the demo was taking place, were Rs 3,800 per 100 kg, against Rs 4,600 around that time last year.

Despite these developments, agricultural operations in India are headed for greater mechanisation. Farmers everywhere complain that labour is not available when required. In the Marathwada region, where cotton is grown in rain-fed conditions, ‘dry seeding’ used to be the norm, says Samiuddin Sadruddin Kazi, a plant nutritionist who is engaged in knowledge transfer from company to farmers for Monsanto, the US multinational which has organized the demonstration. When monsoons arrived in Kerala, farmers in Marathwada would sow cotton seed in dry fields in anticipation and did ‘gap filling’ after the rains, that is replace seeds that had not germinated with new ones, says Kazi a seeds industry veteran and native of Aurangabad. But with the near universal use of Bt cotton, which thrives in irrigated conditions, farmers do sowing only after rains set in.

Those who do sowing soon after the first showers get the maximum yield.  But only a few manage to take advantage of the opportunity as there is not enough supply of labour to meet the surge in demand.

Those who miss out on the rains, have to await their turn. For the ‘last five six years I have been observing that sowing is happening from 15 June to around 25 July,’ says Kazi.  As the intensity of rains increases with the progress of monsoons, there is a greater chance of saplings getting damaged.  ‘There is a big difference in yield between first sowing and last sowing,’ he says.

The same is the case with cotton picking.  Children, being deft, used to be engaged. But more of them are now in schools than in fields. The crackdown on child labour has attenuated the practice though not eliminated it. Cotton yields have also increased with the near universal use of Bt cotton since its approval for commercial cultivation since 2002. The genetically-modified seed does not raise output directly. It does so tangentially by killing the worms that infest cotton bolls. Consequently, there is more cotton to be picked.

Pickers charge by the kilogram and are keen to offer their services during the first couple of flushes. That is when cotton is plentiful and about 60 kg can be picked in a day. The charges range from Rs 6 to Rs 10 a kg. The rate increases for later pickings. The cost of picking a thousand kg of cotton in a one acre field can be about Rs 8,000. Wage costs according to the latest National Sample Survey, in a large component of agricultural costs.

Farmers also have to compete with alternative sources of employment like in construction sites which are more paying, or MGNREGA, the rural jobs scheme, where work is less demanding.

‘Labour is a problem,’ admits S S Ghuge, principal of post 10th standard diploma school in agri technology attached to Vasantrao Naik Marathwada Agricultural University. ‘Our students get no more than Rs 5,000 a month,’ he says, ‘but in the fields no one will agree for less than Rs 8,000.’

Sahebrao Balaji Chavan, 79, a retired high school teacher of Vadod Kanoba village in Kultabad taluk of Aurangabad district says he had to cede half of his last cotton picking to workers. He has fifteen acres of farm land under various crops including cotton, all of it drip irrigated. He has praise for the hard work for a migrant from Bihar whom he has engaged year-round for Rs 6,500 a month and is on the lookout for another like him.

There are those who do not see labour as a problem, like Subhash Lakshman Thomre, 30, of Bodka village in Kultabad taluk who grows corn and cotton on the five acres that he owns. ‘We use family labour,’ he ways. But people like Thomre are the exception.

At the demonstration farm which Monsanto has taken on lease from Vasantrao Naik University for three years, the sowing was done quite late, on 25 July to mimic conditions on actual farmers’ fields.  Machines covered 3.5 acres in one hour, which eight women working eight hours would have taken two days to achieve similar densities of planting. To enable picking by machines, the plants cannot be more than four feet tall.  They have to be planted erect, there should be fewer non-fruiting branches, the canopy should be open and not drooping and the bolls must mature at the same time. As only two pickings are possible, and not five as with plants that that are plucked by hand, the planting density has to compensate. The crop duration is also shorter at five-and-a-half months against seven month for hand-picked varieties.

For the demonstration, one field was planted conventionally with 7,400 plants per acre and the other two with

13,500 and 20,000 plants. The normal agronomic practices were followed, including fertiliser application, but on the 70th day, a growth retardant was applied, as plants in crowded fields tend to grow tall as they reach for the sunshine.

The demo picker was an imported machine from Italy. It could do 1.75 acres an hour, a job which would have taken 30 persons a day to complete (to pick 1,750 kg).  The one which New Holland Fiat is making at its Chakan plant in Maharashtra has been modified for Indian conditions like the sugarcane harvester which it developed earlier. Unlike those in the West which are multi-row machines, the Indian ones are slower spindle type, tractor mounted contraptions that can handle single or double rows at a time.

For the sugarcane harvester, the cost of Rs 1.35 cr is met through a mix of bank loans (up to Rs 1 cr) repayable over five years, with sugar mills giving an advance of Rs 25 lakh and guaranteeing business, while Rs 25 lakh is own contribution. The cotton pickers are expected to be cheaper – in the range of Rs 25 lakh. Rich farmers will find them affordable. Those who are not so well off may have to buy in groups, or hire in the services.