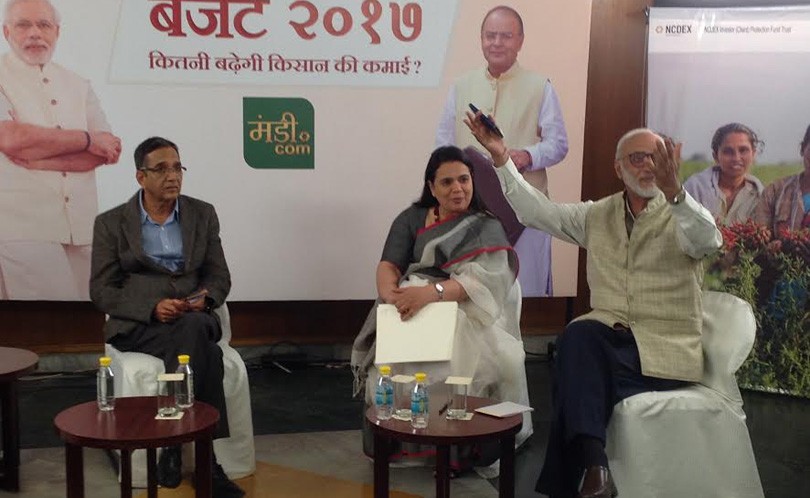 Vivian Fernandes reports on a post-budget discussion organized by NCDEX on Budget and agriculture.

The budget’s emphasis on making agriculture less vulnerable to droughts through the spread of irrigation, water-use efficiency and farmers’ access to markets was welcomed by speakers at  a discussion hosted by the National Commodity and  Derivatives Exchange (NCDEX) in Delhi, though the lack of effort to reduce fertilizer and food subsidies was deplored.

The first two years of this government were lost to droughts, when agricultural  growth averaged 0.5 percent a year. This year there has been a rebound to 4.1 percent because of good monsoons. So the doubling of the corpus for agricultural development bank, Nabard’s Long-Term Irrigation Fund to Rs 40,000 cr and the establishment of a Rs 5,000 cr Micro-irrigation Fund by the same agency were desirable initiatives, agricultural economist Ashok Gulati said. The allocation of Rs 9,000 cr for the crop insurance scheme was higher than last year’s budget estimate but less than the revised estimate. Gulati said the government would need Rs 13,000 cr to ensure the targeted insurance coverage of 40 percent of cropped area. He saw a supplementary budget coming.  While premiums which farmers pay under the new crop insurance scheme were heavily subsidized, the quick settlement of claims was a “litmus test.” The government had failed on this score, Gulati said; claims of farmers affected by floods in some states last year were settled not in weeks but in months.

While there was an emphasis on productivity, as denoted by the initiative to ensure that collected soil samples were actually tested and Krishi Vigyan Kendras were equipped with labs that could test even for micro-nutrients, Purvi Mehta said there was a shift in focus on farmers’ incomes. The announcement of a contract farming law, the decision to double the number of mandis that would become part of the electronic-National Agricultural Market (e-NAM) system,  the outlay for grading and sorting facilities in these mandis, and the establishment of a Rs 8,000 cr dairy fund (with Rs 2,000 cr to start), were initiatives in this direction, said Mehta, Asia Lead for Agriculture with the Bill and Melinda Gates Foundation, an NGO.

Vipin Sharma, CEO of Access, an organisation that works with farmer producer organisations (FPOs), said the budget was “good” but it had little for FPOs. Small and marginal farmers have little staying power; they sold soon after harvest at the farm gate at slump prices. The produce has to be aggregated, which FPOs can do. By sorting and grading, farmers could gain by 10-15 percent. But FPOs should do more; they should process the produce for which the government must subsidize them, he said.

For a government wanting to double farmers’ incomes by 2022, there was no outlay for a pulses’ buffer stock. Owing to good weather, pulses production had risen by 52 percent during the last kharif. Farmers were selling below support prices. For Gulati this was a sign that the government was yet focused more on consumers than on farmers.