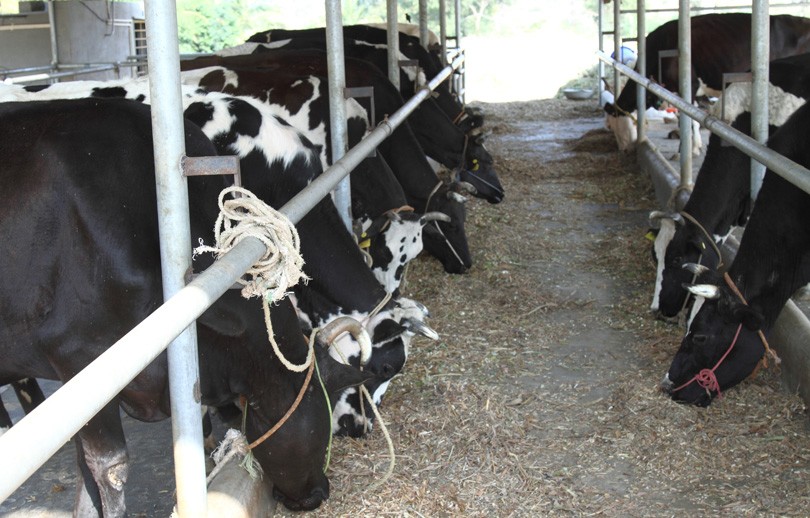 Animal welfare has high priority in the dairies affiliated to Akshayakalpa, a private company set up by a non-practising veterinarian who spent his working life with a Pune-based NGO engaged in rural development. The dung is promptly cleared and flushed into a digester for production of bio-gas which meets cooking fuel needs of the farmer-owner’s family, and the power required for illumination and the operation of pumps, milking machines and  milk chillers. They would pass the sanitation standards of OECD, a club of mainly rich countries. By contrast the tabelas  of Mumbai are quite hideous.  Even traditional stables where cows lie in their own manure albeit with a layer of fresh leaves in between would be wanting in both sanitation and comfort.

Guddahatti Nanjunda Srinivas Reddy, the founder of Akshayakalpa believes cows must be in the right frame of mind for maximum yield of high quality milk.  For him the ideal size is a dairy of 25 cows, about 16 of them lactating, stall-fed with grass, leaves and protein-rich algae, but free to graze, not tethered.  More than 25 cows and farmer-owners will not be able to give personal attention. It is important for him that owners are hands-on; hired hands tend to be abusive and that can tell on milk yield.

Reddy was vice-president of Bharatiya Agro Industries Foundation (BAIF) when he quit in 2010, to set up Akshayakalpa, based on principles derived from his experience. NGOs like BAIF, he says, do good work, but they cannot help enterprising farmers make the entrepreneurial leap. For that their ventures should be well-capitalized so that they can invest in productive animals and labour-saving machinery. They must be affiliated to organizations like Akshayakalpa, which can provide specialized knowledge and services like vaccinations and repair and maintenance. This allows farmers to focus on the production aspect. It also takes care of marketing or linkage to customers.

Reddy says he spent about two years on the template of his dairies.  They are airy, steel-roofed sheds, with rubber matting on cement concrete floors for comfort.  To make dairying appealing to youth, so they stay in villages and not look to migrating to cities, and also to women, who have to shoulder the burden of household chores, operations like milking, chilling and pumping slurry from digesters is mechanized.

Zero external inputs are another principle.  Reddy disapproves of cattle feed. He says it fattens the suppliers at the cost of farmers. Feed is not only a drain of cash, it is incompatible with the digestive system of ruminants. They have been programmed by evolution to process fibre; grain and de-oiled cakes produce acidosis, which damages animal heath and impacts milk production. Oil cakes are also susceptible to fungal attacks. Aflatoxin can harm humans, especially babies.

Akshayakalpa’s aspiration is to help a farmer-family earn a net income of Rs 1 lakh a month. It is a model that is currently applied to dairying integrated with crops like maize, coconuts and pigeonpea (tur), but could be extended to other agricultural activities.  “If tomorrow keeping donkeys can give them Rs 1 lakh a month, we will do that,’ Reddy says.

Sunil (no surname) of Alur village in Tiptur taluk of Karnataka’s Tumakuru district says he earns over Rs 60,000 a month. A young guy, he has studied till the 12th standard. His cows yield 65 litres a day on average for which he gets between Rs 28 and Rs 32 a litre depending on fat content.  The earnings are almost entirely profit, because he has stopped feeding maize procured from the market. Sunil’s association with Akshayakalpa started in June.

Shankareshwara Param  of Vittalalapura village in the same taluk says he earns about Rs 70,000 a month from 16 cows, 10 of them milk-giving.  They eat about 40 kg of fodder, which is produced in his fields.

Akshayakalpa has 130 dairies attached to it in Tiptur. Between them they have about 2,000 animals. Its milk commands a premium.   It sells for Rs 60 a litre in Bengaluru.  Mother Dairy in Delhi, for example, retails full cream milk for Rs 50 a litre.  Reddy says anxious mothers are willing to pay more rather than take chances with their babies. He says demand outstrips supply. He also sells milk products like paneer and butter. Akshayakalpa ghee is priced at Rs 1,000 a litre, which is a stiff premium to brands that do not sport the organic tag and retail for around Rs 400 a litre.

Reddy encourages his buyers to drink milk without boiling, which, he says denatures protein and breaks its bond with calcium, inhibiting absorption by the body. There is no risk of contamination, as milk supplied by Akshayakalpa is hygienically extracted with machines and promptly chilled.  Reddy believes “mother cow” puts “bio-protectors” or enzymes in milk to block harmful bacteria, making milk “truly amruta.”  But Reddy is no zany traditionalist. He does not, for instance, believe in the magical properties of desi cow urine.

(The National Dairy Research Institute in Karnal, Haryana, says boiling does degrade milk protein, but the loss in nutritional value is acceptable. Even if the udder is thoroughly cleaned, the cow can shed pathogens, so it advices pasteurization).

Despite the assurance of a steady source of income, Akshayapatra’s affiliates do not get bank finance. Reddy has therefore enlisted a group of seven investors. They are based in Bengaluru, Hyderabad and Ahmedabad. Some of them are information technology professionals, one owns pharmaceutical units and another has a resort in Kutch and exports dates.

Called Mission 2020 they have an affinity to agriculture, but not the time for it. Sunil’s dairy in Alur has a covered platform on stilts where some of them spend weekends in tents. The bucolic setting is a break from Bengaluru’s bustle.

‘We have taken it up as a research project, says Sandeep Kamath, a marketing consultant and secretary of the Biodynamic Association of India. (Biodynamic preparations are made from buried cow horns filled with banyan tree soil, which is said to produce microbes that can enrich compost and ward off fungal diseases. The Indian Institute of Farming Systems Research at Modipuram near Delhi, says the claims are exaggerated).

The group’s ambition is for the dairies they have invested in to each produce 200 litres of milk per day. They are willing to top-up the capital and operational expenditure. They expect a return of around 18 percent. If inclined, they can continue as partners, or exit after a few years by selling their shares to the farmer-owners.

Reddy next plan is to make his farmer associates shareholders in Akshyakalpa, which is a private company. That way, he thinks, it will become a movement.

(A version of this report was published in the Financial Express on 31 October).