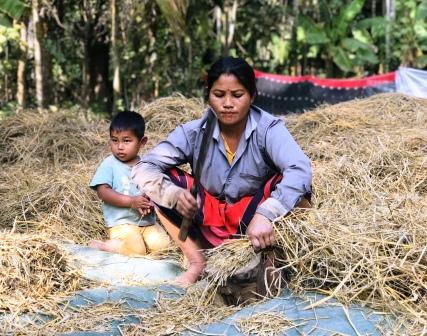 In 2020, as young people returned home to their rural communities displaced from their jobs in the cities, many feared they would be returning to no jobs and limited livelihood opportunities. For young people coming back to Baligaon Miri village in Sonitpur, Assam, however, they returned not to unemployment, but to new jobs and a lucrative livelihood opportunity in agroforestry.

Agroforestry is a unique opportunity that allows farmers even with extremely marginal holdings to benefit. In a total of 0.3 acres of land, a farmer can grow up to eight crops simultaneously, from cash crops such as pepper and ginger to nutritious food crops such as pumpkins, moringa, and sweet potatoes. Studies indicate that agroforestry in tropical countries like India improves overall land productivity by up to 56 percent, simply by optimizing land use.

When piloted in a scientifically constructed food-forest model, with eight varieties of trees and shrub crops representing the different ‘layers’ of a forest canopy, it offers direct ecological and income gains. The complementary crops simulate natural organic conditions, cycling nutrients back into the soil and minimizing water use. These ecological benefits enhance the natural ecosystem supporting agricultural cultivation, creating a naturally self-regenerating system – and diminishing the expenditures needed to invest in fertilisers and other chemical inputs.

For many communities, the early Covid-19 lockdown had disrupted their traditional planting schedules and closed down jobs and livelihood streams that carried them through non-cultivation/harvest months. Agroforestry in this period played a critical role in boosting their income security in the absence of access to city-based jobs – which are unlikely to recover to their previous levels within the next year – and the disruption to traditional cultivation and harvests down the line. Unlike seasonal cultivation for standard farming, agroforestry cultivation can continue throughout the year, because of the different planting and maturation periods required for each crop.

For the Mishing community in Baligaon village, the creation of food forests on empty lands belonging to the communities has seen an immediate rise in incomes within the first year of cultivation. On the whole, the community has seen their incomes increase by up to 40 percent. With the added income from mushroom cultivation, household incomes saw a further increase of up to 15 percent. For the women who managed this cultivation, their incomes saw an increase of 50 each month, with minimal disruptions to their regular tasks and activities.

“We didn’t feel the economic pressures,” said Pabitra Mili. By June 2020, some 200 migrant workers returned to the village as businesses shut down. “We took it as an opportunity to involve them in expanding our agroforestry.” During this period, he initiated the plantation of commercially viable species of amla and bamboo on village common lands, further enhancing their livelihood opportunities.

Senai Mili and Maheshwar Mili from Baligaon Green village, Sonitpur district are entrepreneurs who have implemented the agroforestry model on their land. The model has helped them earn livelihoods with a profound ecological impact addressing soil, health, water sequestration, income, and biodiversity revival all in one go.

“This model is helping us earn revenue by selling in the market and the village,” they said. “Agroforestry has helped increase the resilience of farming systems in the village and has supported us to open homestay doors for tourists from all over the world. We serve the tourists vegetables and food from our agroforestry land, and make ethnic Mishing delicacies.”

In addition to agroforestry, mushroom cultivation also played a key role in diversifying and opening up new income opportunities for the people of Baligaon village. On the whole, households in the village saw an average increase of up to 15 percent in their incomes. However, it was the women who truly took the lead and saw an astonishing expansion of their economic opportunities. As they manage the mushroom cultivation units, their overall incomes increased by 50 percent each month – with minimal to no disruption of their regular schedules as oyster mushrooms required minimal attention and inputs.

Dusila Mili, a woman entrepreneur who has been involved in agroforestry with her local women’s group, explains: “My household expenses are fulfilled by it, and additionally I can save some time and money as well.” She earns about Rs 10,000-15,000 a month.

The cultivation process has also helped build circularity into their agricultural systems while reducing wastage and input costs.

“The mushroom farming uses rice straw waste, which would otherwise be burned and cause noxious smoke,” says Dusila. “The leftover from the mushroom cultivation can also be used as bio-fertilizer and thereby helps in replenishing the soil and reducing both the amount of chemical fertilizer needed and the costs.”

The case study of Baligaon demonstrates how agroforestry can help communities become self-sufficient and food secure while improving incomes for farmers through increased productivity. In India’s North-East, agroforestry earnings alone would generate Rs 36,045 crores annually if its agricultural land were optimized. Investing these earnings back in the community could deliver universal basic assets such as healthcare, education, energy and water access to over five lakh households – with spending on healthcare and education matching OECD standards. This alone would create the basis for a natural positive circular economy.

Komison Mili, one of the leading voices behind Baligaon’s move towards sustainable agriculture reflects: “It was not our job exactly, as young children, to think and act in this way, but I am glad that we did, perhaps out of adversity, and lack of guiding authority, to think for the future, in terms of preserving our inseparable rich ecology and culture.” His interest in the village’s future led him to encourage farmers to adopt models like agroforestry and move away from chemical-based farming towards organic farming.

“The importance of conserving our environment, maintaining an ecological balance, and not destroying our ‘traditional’ relationship with nature, I felt necessary all my life,” he said.

Agricultural policies need to work with and incorporate these perspectives. A robust climate-smart agricultural policy must be tailored to local conditions and needs, elevating indigenous and local crops, and providing robust crop insurance mechanisms for vulnerable farmers. More direct economic support needs to be directed into supporting agroforestry, along with support for rural entrepreneurship in value add activities.

With a future of climate uncertainty on the cards, a biodiversity-smart, climate-smart approach through agroforestry is low-hanging fruit we must invest in. The future of indigenous communities depends on our willingness to invest in nature.

(This article was authored by the staff of Balipara Foundation, founded by Ranjit Barthakur, a social entrepreneur. He is an advisor to the Tata Trusts on North-East programmes. Barthakur was a corporate executive with companies engaged in consumer staples, information technology and hospitality.  Photo of a woman of the Mishing community in Baligaon Miri village, Sonitpur, Assam working on rice straw for mushroom cultivation. Courtesy of the Balipara Foundation).