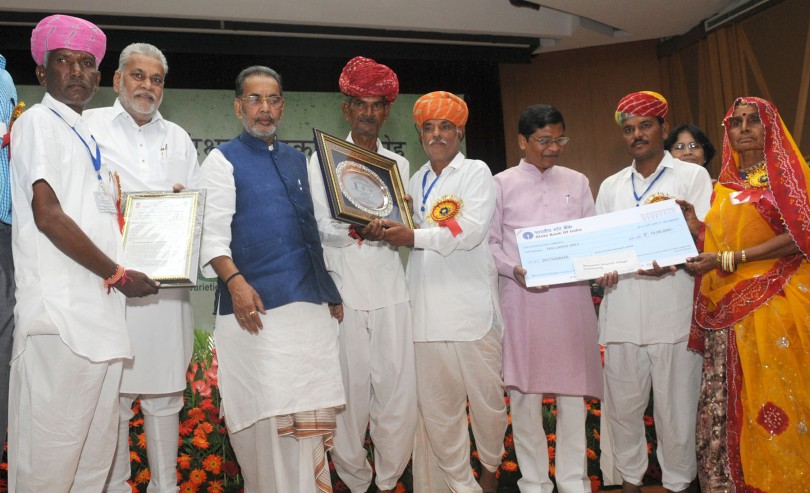 The ministry widens the wedge in the Indian seed industry, when globally companies engaged in crop protection and developing plant traits are consolidating, reports Vivian Fernandes. This column was first published in the Financial Express.

J S Chauhan, Assistant Director-General (seeds) at the Indian Council of Agricultural Research (ICAR) was unusually forthright for a government official at an event on intellectual property rights in genetically-modified (GM) seeds, organized by the National Seed Association of India (NSAI) in Delhi.  ‘Did the circular come into force on the request of farmers?’ he asked, referring to last December’s order of the agriculture ministry bringing Bt cottonseed under price control nationally. ‘Perhaps not,’ he added.

Other officials at the event sang the tune of the organisers who had strongly pleaded for price control. Tajamul Haq, former chairman of CACP, the body that fixes minimum support prices for crops, and currently head of NITI Aayog’s special cell on land policy, said India had always frowned on monopolies and referred to the infamous Monopolies and Restrictive Trade Practices (MRTP) Act. That law carried socialist paranoia at corporate expansion to such a ridiculous level that it put a company with assets of over Rs 100 cr (in 1985) at a regulatory disadvantage. The cap was removed in 1991.  Haq said ‘market in true sense does not exist.’ As an economist he should know, he asserted.  ‘So there is role for government. There must be price control,’ to balance the interests of producers and consumers (or farmers).

Is there evidence of balance in the March order of the agriculture ministry fixing the maximum retail price (MRP) of Bt cottonseed?  (These seeds have genes imported from a soil bacterium which help the plants produce their own insecticide).  For Bt cottonseed with one insecticidal gene, the order says only the seed value, which includes cost of production, overheads and profits ─ Rs 635 per pack of 450 grams ─ is payable as the GM trait has gone off patent.  For the patented two-gene version, the trait value has been fixed at Rs 49 and the MRP at Rs 800. The South Asia Biotechnology Centre, an advocacy group, says farmers should have paid no more than Rs 684, which is the seed value (Rs 635) and technology fee (Rs 49). A scientist heading the agri-biotech department of a prominent seed company said that there would be a marginal increase in breeding and testing costs when two genes are inserted. C D Mayee, who was director of the Central Institute of Cotton Research in 2002, when Bt cotton was introduced, says the additional cost would at most be Rs 10 a pack.  So the price control order transfers an extra Rs 106 a pack from farmers to seed companies or Rs 435 cr on 41 million packets estimated to have been sold this planting season.

But NSAI is not satisfied. A few days after the order, it wrote to the agriculture ministry it was ‘disappointed.’  The price of Bt cottonseed with a single insecticidal gene should have been Rs 800 and the version with two genes Rs 875, it said, to allow ‘sufficient profit margins to invest in R&D.’ It also wanted a premium of Rs 100 on Bt cottonseed hybrids that had been introduced over the past three years. This after pressing for a trait fee cut from around Rs 180 to Rs 49 for the sake of farmers.

Finding that NSAI was not representing their interests, 10 of its members, including Bayer Cropsciences, Dupont Pioneer and Syngenta, which are engaged in agri-biotech research announced the formation of another lobby group, even before its incorporation, on 26 August.  Kalyan Goswami, NSAI’s Executive Director, called them ‘Monsanto’s loyalists.’  Three of them – Mahyco, Monsanto and Rasi Seeds ─ have quit NSAI. Prabhakar Rao, who is Chairman of NSAI and CMD of Nuziveedu Seeds Group, has a score to settle with Monsanto. It has cancelled his franchise over non-payment of trait fees for the past couple of years. Nuziveedu is the single large seller of Bt cottonseed.

Speakers at the breakaway group’s launch conference wanted ‘more transparency’ in policy making. Reporters sought to know whether it implied the agriculture ministry was less transparent. They will find a reply in Mahyco’s withdrawal of its application seeking regulatory approval for Bt cottonseed with herbicide tolerance and a spodoptera-killing gene (in addition to being toxic to bollworms). Though seen as a protest against a May notification on patents, it is an exercise in caution.

In the May notification, the agriculture ministry waived Bt cottonseed patents, invoking the Essential Commodities Act. Monsanto was the most aggrieved as its two-gene insecticidal trait has 99 percent share of the market, though such traits are offered by three other companies as well. It is obvious that cotton farmers do not find the latter very effective. Buckling under the backlash, the agriculture ministry converted the notification into a draft for consultation over 90 days. That period got over on 24 August. Executives of agri-biotech companies get the impression that the ministry will substantially re-instate the notification. Others say this is unlikely given strong pushback from the US government.

But Mahyco, in which Monsanto has a 26 percent stake, is not taking chances. NSAI Rao says the Indian Patent Act does not apply to GM traits, as ‘seeds and plant varieties are not inventions.’ They should be patented under what is called the PPVFR Act. Breeders like him can use a trait, without permission of the trait developer, after it gets regulatory approval, he asserts.  They will pay the trait fee, according to a procedure to be prescribed by the agriculture ministry, to a National Gene Fund on which the trait developer can make a claim.

It is to forestall this eventuality and the possibility of the new trait being snatched virtually for free, that Mahyco withdrew its application. Such is Rao’s perceived influence on the agriculture ministry and his reputation for getting things done!

Paresh Verma, Research Director of  Shriram Bioseed, and head of ABLE-AG, the association of agri-biotech companies, does not accept Rao’s interpretation. He says GM traits being nucleic acid sequences engineered artificially are inventions and therefore patentable . He agrees that seeds cannot be patented, but ‘the rights of the trait developer do not get exhausted when (GM) traits are introgressed into a hybrid or variety.’  In his view, both the patent act and PPVFR Act can co-exist.

The breakaway Federation of Seed Industry of India says recombinant DNA and protein sequences engineered for insect control, herbicide tolerance or nitrogen use efficiency, and processes for making transgenic plants, were made patentable in the 2005 amendment of the patent act.

ICAR’s Chauhan also disagreed with Rao. ‘There should be no compulsory licensing,’ he said.  According to him, the PPVFR Act does not allow free use of a proprietary trait for commercial purposes.

R R Hanchinal, chairman of the PPVFR Authority, did not express an opinion at the NSAI event. Instead he intoned platitudes about ‘farmers have contributed so much to conserving biodiversity’.  Asked why he had skirted the issue of patentability, Hanchinal told this correspondent, ‘If I make a statement I will have to implement it!’