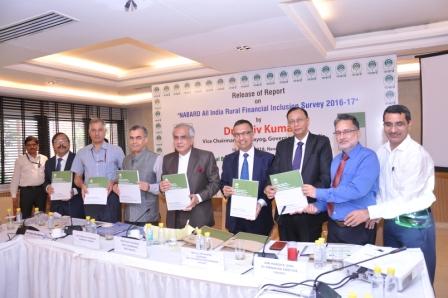 Less than half — 48 percent — of rural households are agricultural and their share of monthly income from cultivation and animal rearing is less than a quarter, according to a survey conducted by Nabard, the National Bank for Agriculture and Rural Development.

An earlier survey, published in 2014, by NSSO, the National Sample Survey Organisation, found that 57.8 percent of rural households were agricultural and 59.8 percent of their income was from cultivation and animal husbandry.

The Nabard survey says the monthly income of agricultural households in 2017 was Rs 8,931 compared to Rs 6,426 estimated for them in 2013 by the NSSO survey. That is a compounded annual growth rate of 8.25 percent. Agricultural households in the Nabard survey derived 43 percent of their monthly income from cultivation and farming of animals, a decline of 16 percentage points over the share estimated by NSSO.

The average rural household according to the Nabard survey gets just 23 percent of its monthly income of Rs 8,059 from cultivation and livestock rearing. Wage labour, salaried employment, and business activities were the other sources of income.

Nabard has a larger universe because it has included centres even in semi-urban areas with population up to 50,000. This has given it 16 percent more rural households.

Nabard survey is the first and will be held every three years. NSSO does the Situation Assessment Survey of Agricultural Households every 10 years.

Nabard covered 186,518 persons from 40,327 households in 245 districts across 29 states. The NSSO survey covered 35,200 households in the first half of 2013. All except 293 of them were re-visited during the second half of the year. They were from 36 states and union territories.