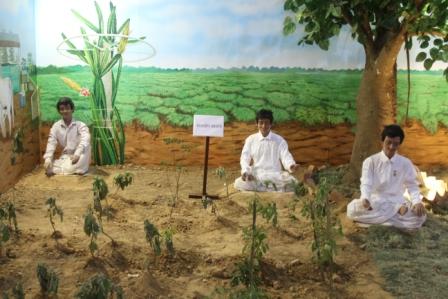 Like Chinese and Soviet nationalists under erstwhile Communist regimes, Agriculture Minister Radha Mohan Singh believes cultural nationalistic fervour can produce miraculous results in agriculture. Shown here is a depiction of yogic farming at Krishi Unnati Mela, 2018. While the yogic-farmers are in calm repose, the plants are wilting. It sums up the state of Indian agriculture under Singh, reports Vivian Fernandes.

On 3 October, a national workshop on “Yagya for Sustainable Development Goals 2030” was held at the B P Pal Auditorium of the Indian Agricultural Research Institute in New Delhi. It was organised by Goras Pariwar in association with the Department of Panchayai Raj in the rural development ministry and the Department of Agricultural Marketing and Cooperation. The head of IARI’s Centre for Agricultural Technology Assessment and Transfer wrote to the institute’s heads of divisions to “kindly participate in the workshop along with faculty members and students” for the day-long event. He said this was “as desired by the competent authority,” who, in this case would be Agriculture Minister Radha Mohan Singh because an earlier email to the IARI Director from the Secretary, GOU Federation, mentions an “official communication from the Ministry… to your esteemed Institution in this regard.” 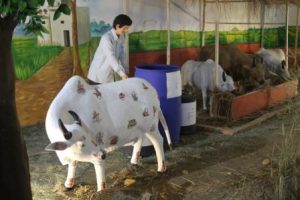 Singh believes that forces beyond nature can be invoked through yoga to boost the potency of crops.  An official release of his speech at Vigyan Bhavan in October 2016 has him saying that with yoga, the “sprouting powers” of seeds can be escalated by “dint of divine powers.”  He explains how “the five elements are made conducive through yoga proceedings before the seeds are sown.”

The information officer’s valiant effort at making sense of the speech in the translation shows through. “Raj yoga shoots out the fertilizing strength of the soil along with the increased activation of micro metabolism thereof.  The farmers through the modus operandi of vibration conveys to the plants about peace, love as well as purity which leads the resistance power of crops and its growth along with the increasement of production.”

This is faith, not science.

At the curtain raiser of last year’s Krishi Unnati Mela in the IARI campus, Trilochan Mohapatra, the Director-General of the Indian Council of Agricultural Research said the purpose of the mela was to take technology to farmers. And this is indeed what Pusa Agricultural Fair as it was called before 2016, strived for since 1972. But at this year’s mela sizeable space was given to mystic technologies.  At every few metres there were hoardings of Prime Minister Narendra Modi declaring that farmers’ income would double by 2022. Perhaps, the audience was supposed to infer that the one would lead to the other. A participant explained the formula for bijamrut, said to be an enhanced plant nutrient made by fermenting 5 kg of cow dung with five litres of cow urine, 50 grams of lime and 20 litres of water. For jivamrut, 10 kg of cowdung is mixed with 10 litres of cow urine, 2 kg of jaggery, an equal quantity of besan or gram flower and 20 litres of water. For the six types of biodynamic preparations, 40 kg of cow dung is mixed with 100 grams of eggshell and like quantities of besan and jaggery. These are placed at six locations in a field in 18 inch by 18-inch squares made with 40 bricks each. The mix when turned every 15 days apparently yields manure rich in protein, calcium and micronutrients after two months, an exhibitor explained. 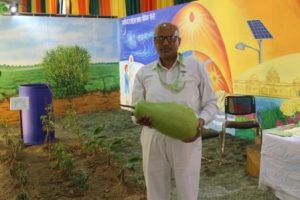 Narendra Dev, a proponent of Rishi Muni Kheti. All photos on this page by Vivian Fernandes.

Narendra Dev, a proponent of Rishi Muni Krishi said solar energy can be transferred to plants in the form of sound waves through meditation. (What is chlorophyll for?) “The soul is a part of light,” he explained. Dev was an assistant director in the finance ministry before taking voluntary retirement in 2012 to join the Bramha Kumaris in Mount Abu.

The minister is entitled to idiosyncrasies so long as taxpayers do not have to underwrite them. In reply to a Right to Information query, the agriculture ministry said the four-day mela cost Rs 24 cr this year against 14 cr in 2016. While the marketing pitch says “lakhs of farmers congregate” at the mela the ministry replied that 42,000 farmers registered this year against 75,000 in 2016.

The page is no longer available on the agriculture ministry’s website. But the ministry told the Lok Sabha in August in response to a question that these organic farming models qualified as paramparagat krishi.

Even as IARI scientists were being urged to attend the yagya, thousands of farmers from found Delhi led by the Bharatiya Kisan Union were marching to the capital to demand relief from cane arrears and rising diesel and fertiliser prices. And a few weeks before (20 September), Dow Agro Sciences and Dupont Pioneer told the Genetic Engineering Appraisal Committee (GEAC) that they were not proceeding with trials of genetically-modified maize hybrids in Karnataka and Punjab because they were not sure of getting approval for cultivation of these hybrids once they passed the bio-safety tests or of protection of their intellectual property rights in them.

The minister should be concerned about these developments which undermine the preparedness of Indian farmers to face the future, rather than breezily asserting that their income will “at least” double by 2022.  In February in Port Blair, he called upon farmers to make India chemical free as desired by the Prime Minister. He terms chemicals as deadly without realizing that the toxicity is in the dosage.

On 24 October, KV Subbarao, the South Asia Leader of Corteva Agriscience said it would introduce 21 products over the next five years. The company houses the seed and crop protection business of DowChemical and DuPont, which have merged. The company’s insecticide that acts against the brown plant hopper in rice was introduced worldwide in July and is awaiting approval in India. In the next quarter, a herbicide meant for directly sown (not transplanted) rice will be launched. When asked whether these launches do not make the company misaligned with the country’s agricultural objectives as defined by the government, Subbarao said, “we want to put science and innovation at the forefront.”

Corteva Agriscience has products that address the organic segment as well, but the emphasis is on chemical-based precision agriculture that leverages the power of soil and weather data. Giant companies like these set and mirror the global trend. Perhaps it is the government which is misaligned from the real needs of farmers.