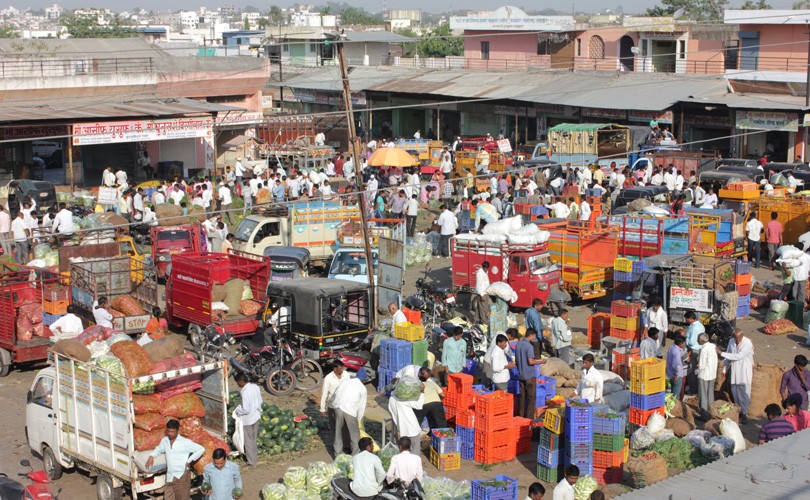 The Maharashtra government has resisted opposition from traders and removed fruits and vegetables from the list of commodities that can be sold only through regulated mandis, reports Sandip Das of The Financial Express. This will allow farmers to sell their produce to buyers outside the 305 regulated mandis in the state, including Vashi, the country’s second largest wholesale F&V market. Delhi’s Azadpur mandi is the largest with an average daily trading volume of 15,000 tonnes.

Das reports the state government backtracked twice: in January when an ordinance was withdrawn because of traders’ protest, and in May 2012 when the NCP-Congress government capitulated.

The Vashi mandi is about 35 km from Mumbai and spread over 70 hectares.  Last year it saw arrivals of 893,000 tonnes of onions and potatoes, 564,000 tonnes of other vegetables and 664,000 tonnes of fruits, reports Partha Sarathi Biswas in the Indian Express. That is 5,810 tonnes on average a day, if the mandi remained opened throughout the year.

Azadpur mandi lost its monopoly in September 2014, but there has been no decline in volumes.

The Small Farmers Agribusiness Consortium was supposed to create an alternative online trading platform, but  has not even been able to acquire the land for it.

High fees is the main reason that the Maharashtra government wanted to break the Vashi cartel. According to Biswas, the mandi charges  6.5 percent of the purchase price of onions and potatoes as commission. It is 8 percent for other vegetables and 10 percent for fruits.

Traders justify the rates saying only a quarter of the produce is of the best quality and they have to be bear losses arising from rejects. They deny there is a cartel; since 2002, the state government has licensed various entities to buy at the farm gate and 34 private markets have been permitted.

Yet three-quarters of Maharashtra’s trade in  fruits and vegetables happens in its 305 mandis, which according to cooperation minister Chandrakant Patil, have an annual turnover of about Rs 50,000 cr.  Removing fruits and vegetables from the list of commodities to be compulsorily traded through them, might reduce the turnover by Rs 10,000 cr, he says.

The Maharashtra government has been able to push through the relevant ordinance because the mandis are controlled by the Congress and Sharad Pawar’s Nationalist Congress Party. The Vashi APMC is under a state government appointed administrator; the earlier board was superseded for alleged malpractices

Agriculture marketing reforms have been talked about since early last decade when a model Agricultural Produce and Marketing Committee law was crafted. In  April this year, Prime Minister Narendra Modi launched the National Agricultural Market (NAM) with 21 mandis across eight states joining the online platform:  Telangana (5), Uttar Pradesh (5), Gujarat (3), Haryana (2), Himachal Pradesh (2), Jharkhand (2), Madhya Pradesh (1) and Rajasthan (1). Both Azadpur and Vashi mandis are not on it. The agriculture ministry wants 200 mandis to join in by September, 200 more by March next year and the remaining 185 by March 2018, reports Das.

NAM is not a parallel market. It is online platform with physical mandis at the backend enabling even those outside the state to participate in trading. Currently, separate licenses are needed for trading in each mandi, their charges vary and there is substantial cost in moving produce from one mandi to another.

With NAM, traders can bid for produce online or offline. There is only a single registration. The fees in either case will be credited to the concerned mandis but will lead to a reduction of various levies.

Pravesh Sharma, a former IAS officer who took voluntary retirement earlier this year and got into vegetable marketing in Delhi says in a column in the Indian Express that  states are not very keen to give farmers the freedom to trade.

Sharma was involved in the NAM initiative in its early stages. He says states opposed giving total freedom to farmers to sell their produce on NAM. They feared it would diminish the business of mandis, which collect thousands of crores in cesses and other charges annually, besides aggrandizing the mandi functionaries who charge illegal sums for allowing traders to bypass the maze of rules.

Major agricultural states, including Punjab and Maharashtra, have scorned the Centre’s overtures to join NAM, he says. They are unwilling to adhere to even certain basic conditions such as allowing traders outside the state to bid online. Gujarat rejected the use of the NAM software and floated its own tender to develop a local version, creating major problems for integration. Madhya Pradesh allowed NAM in just one out of its 546 mandis. Haryana said it would experiment with a single crop —  safflower, a minor rabi oilseed. Tamil Nadu continues to ignore requests to submit its proposal for implementing NAM.

Sharma says NAM should be managed by a commercial entity which equal ownership of the centre and a private party chosen through competitive bidding. The Small Farmers’ Agribusiness Consortium, which is a government organization, is not up to the task, he says.

(Top photo of a mandi in Jalgaon, Maharashtra, by Vivian Fernandes)