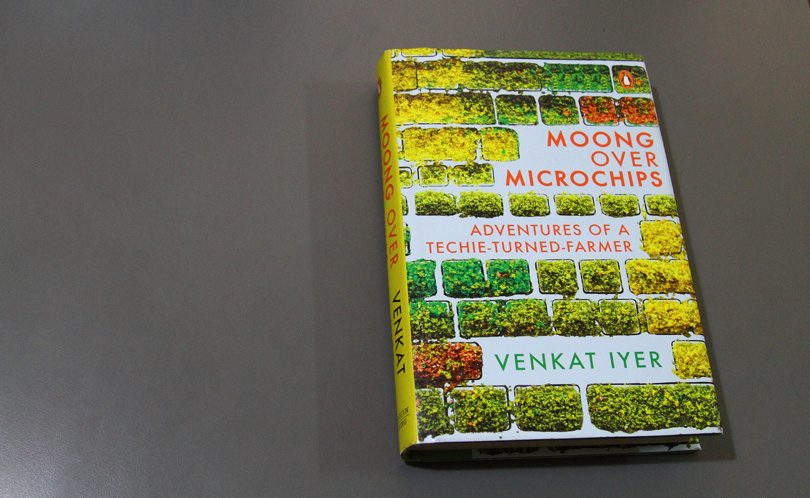 Venkat Iyer was an IT professional before he turned to agriculture as if on whim, 14 years ago. It was like falling in love. He plunged into it blindly without any knowledge of the craft. He claims never to have used chemicals, for crop nourishment or protection. He dreads GMOs. He gives the impression of confusing high-yielding varieties of rice with hybrids. His book, Moong over Microchips, is a 14-year view of rural life by a person who is both actor and observer, reports Vivian Fernandes.

Thank God for asymmetric information.  Without it many leap-of-faith enterprises, floating on hope, driven by optimism but ending in failure, would not have been attempted. We would not embark on journeys whose destinations changed in the light of experience along the course. Life, in short, would not be adventure.

It is inadequate information and the audacity of infatuation with the idea of pristine agriculture that goads Venkat Iyer to privilege “Moong Over Microchips” (the title of his book, published by Penguin) and extinguish a 15-year career in the information technology industry to be reborn as a farmer. It takes some courage to renounce the certitude of a monthly cheque from IBM, where he was project manager, and welcome 2004’s New Year’s day with not even a piece of farm land and just the flimsy comfort that if he sold his assets, including a 530 sq ft residential apartment in a Mumbai suburb, he would be able get by in a village for ten years on Rs 6,000 a month before going broke. (Of course, his wife was employed as a journalist, and he could always return to an IT job if the farming gamble did not pay off).

Iyer’s earnest enthusiasm is tested by his encounter with officials. They are predatory. What stands out is how little difference the administration makes despite huge outlays.(That of the central agriculture and rural development ministries is Rs 59,600 cr and 1,22,463 cr respectively for 2017-18).   Very few people practice agriculture voluntarily but the official attitude to those that do is less-than-welcoming.

After striking a deal for a 4.5 acre farm in village Peth on the border of Dahanu and Palghar talukas in Maharashtra, Iyer has to obtain a no-objection certificate before he can buy it. Only graduates in agriculture or those hailing from agricultural land-owning families are eligible to buy agricultural land.  The provision is meant to prevent land sharks from grabbing farm land. The district collector (DC) can waive the requirement but he doesn’t wish to set a precedent. The clerk in the land department can do the job if paid and suggests that Iyer use the services of a local lawyer. Iyer refuses to bribe. He visits his ancestral village in Kerala for a certificate that his grandfather was an agriculturist.  Even then officials back in Dahanu mislead him into making multiple visits from Mumbai, till he complains to the DC  and obtains the NOC.  But Iyer’s resolve crumbles when getting the title transferred.  He gives in.

Officials see every scheme as a profit-making opportunity. Subsidized seed is sold at a mark-up to the printed price. On a complaint to the Block Development Officer, officials refer to a vague “circular” which they cannot produce because it’s in a file with the DC! The village folk are resigned and wink at such practices rather than fight them. Trouble makers among them are usually co-opted with some paying government programme

Getting disaster relief is also not easy.  Denied compensation for crop loss caused by a cyclone, Iyer produces a 7/12 extract but is still overlooked when floods hit the village. An application under the Right to Information (RTI) Act causes a flutter. Instead of making amends and giving him his due, they try to trick him into withdrawing the application. He digs in and they finally relent.

On another occasion, a team of officials descends on his farm seeking payment for drawing river water. The bill will be in the “thousands” he is told, but can be reduced if he “cooperates.”  After the usual tugs and tears he is sent an official bill for a few hundred rupees which he’s told to ignore, but doesn’t.

Iyer wants his farming activity to be self-sustaining. It has to be cash-lite which means minimal use of inputs from the market.  That rules out high-input, high-output agriculture with high-yielding varieties and hybrids. A year into farming, Iyer wishes to plant Kasbai, a traditional long-grain variety, with an aroma, distinct but milder than basmati. Finding the seed is a production in itself. The local agricultural officer has not even heard about it. On his second attempt, the agency that procures rice from tribals at the behest of the government, guides him to a village after scanning its files. He finally finds the seed in a hamlet, with a “wrinkled” old adivasi woman, who has never heard of his village, nor comprehends measures like kilogram and happily parts with a basket for Rs 100. That was in 2005.

Iyer blames “development” for the loss of traditional knowledge of cultivation. Hybrids have become commonplace after the village was given access to canal water. There is also herd mentality in operation. People don’t have a problem solving attitude. Despite labour being scarce, they shell groundnuts laboriously for planting. Iyer soaks them instead and is none the worse-off for it. He plants 60 kg of seed and gets 707 kg of output. He does not transplant rice for the same reason. He puddles the field with oxen instead and scatters the seed. He gets a lush crop but it fails for want of irrigation. When coconuts fall off prematurely, he has the option of applying boron. But since chemicals make him apoplectic, he uses calotropis gingantea, a wild plant with a milky sap, which makes a “dramatic difference.”

Then there are lessons in marketing. Iyer’s very first crop is of moong. He sows 10 kg and gets 300 kg. The local grocer offers him Rs 12 a kg when he is retailing it for Rs 30.  He does not care that it is organic. His customers are not discriminating. Iyer finds a buyer for Rs 17, but when the cheque arrives a month later, he finds a “cleaning” fee has been charged.  On another occasion, the price of bhindi ─ Rs 4 a kg ─ doesn’t even cover the cost of production. Iyer ploughs the vegetable into the soil. Unlike most farmers Iyer gets a better price on average. His groundnut oil is a draw with friends in Mumbai and his organic vegetables are bought by a vendor in Vile Parle. But marketing is a weak link. Small holder farmers cannot crack it unless they are organized.

Why would an unpaid loan of Rs 20,000 drive a farmer to suicide? Iyer understands their distress when a moneylender or a bank officer comes visiting to recover dues. The news spreads through the village. There is loss of face. When credit recovery agents took away a neighbour’s television set, his wife was “so embarrassed that she did not leave her house for almost a year.”  Overstatement perhaps, but one gets the drift.

Venality abounds. Franchisees spring up in the village to collect electricity bills of the state utility. People prefer them to the local bank with its long queues. A couple of months later the payers find that they have been duped. The so-called franchiser from Malad in Mumbai has decamped with the money and their bills are unpaid.

A neighbour gets money from the state’s Employment Guarantee Scheme to dig a farm pond with manual labour. He employs machines but submits that he has spent all the money – Rs 40,000─ on wages.

It is a tough world and people find various coping mechanisms. At the end of 14 years, Iyer has a positive report card to show. He would have been financially better off in the city, but he has been compensated with psychic income. Asymmetric information does not lead to zero-sum outcomes, it seems.