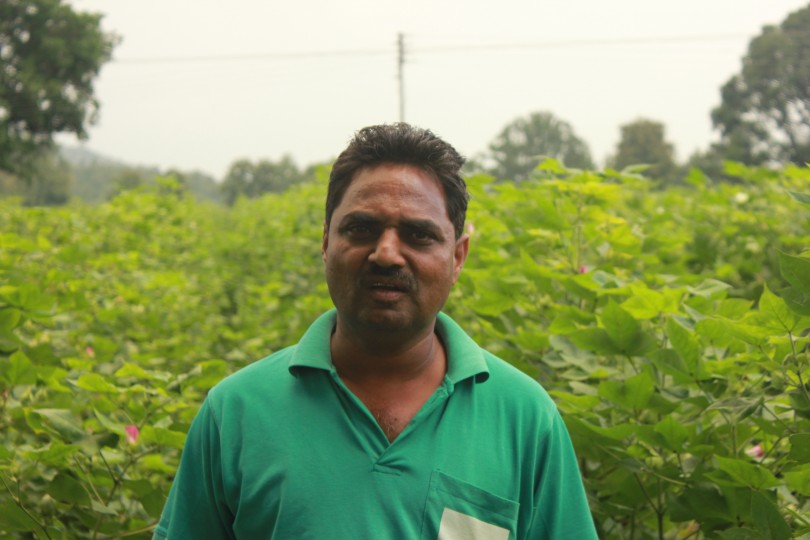 About 20 persons have died of pesticide poisoning in Maharashtra’s Yavatmal district and more than 500 have been hospitalized. A progressive farmer, who lives in village Hirvee, about 100 km from the district centre whom this website contacted ascribed the deaths to constant exposure to pesticides owing to cotton plants growing taller and more luxuriantly than usual this year, creating conditions for bollworms to flourish.

Vijay Mahadev Niwal, 54, himself planted cotton on 35 acres of his joint family’s 75-acre holding. He planted soybean on an equal area, and pigeonpea (tur) on five acres. Yavatmal receives 911 mm rainfall on average. This year, there was a 38 percent shortfall, says Niwal. (See note below). But it was spread over many more days – 55 – than last year. Less rain over more sunny days helped luxuriant growth of cotton plants. They grew to a height of about 6 feet, says Niwal, when the normal height is about 3½ ft to 4 ft.

Cotton plants have grown taller than average workers in Yavatmal this year. Photo by Vijay Niwal.

This year there was an attack of pink bollworm. The American bollworm to which Bt cotton is supposed to be resistant was also seen, says Niwal, who is a graduate in engineering and owns a two-wheeler dealership.  He is a member of the Shetkari Sanghatana, the farmers’ union which believes in “freedom of the markets, freedom (in choice) of technology and minimum power of government,” as he puts it.  Farmers should grow non-Bt cotton for bollworms to feed on (and delay resistance). They are given the seeds in a separate pouch in Bt cottonseed packs. But they do not sow the seeds because they want to maximize their output even though the practice has long-term consequences. Only a brand of Nuziveedu Seeds came with Bt and non-Bt cottonseed mixed, so farmers had no choice but to sow both.

A brand of pesticide used on cotton plants this year. Photo by Vijay Mahadev Niwal.

To control the pests, farmers sprayed a cocktail of contact, systemic and vaporised pesticides. But because the plants were tall, the workers ingested the poisons through their nose, mouth and skin. The labourers are paid Rs 300 for spraying 200 litres a day. They work from 8 am to 4 pm without protective gear. They also do not observe precautions like not spraying against the direction of the wind.

Continuous exposure for many days and even weeks took a toll of the workers. Niwal says he did not let the plants grow tall in his field. When they were about 70 days old, he lopped off their tops, so they grew sideways rather than upwards. Such commonsense precautions when ignored have lethal consequences.

(Top photo of Vijay Mahadev Niwal in his field at village Hirvee in Yavatmal district in 2013. Photo by  Vivian Fernandes).