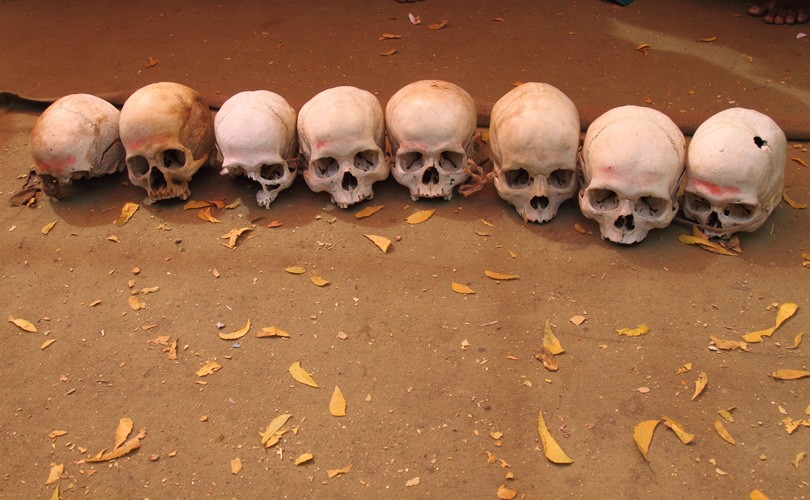 Vivian Fernandes reports on farmers from Tamil Nadu who have chosen a novel way to draw attention to their grievances.

A macabre protest by farmers from Tamil Nadu at Jantar Mantar, the officially-allotted site for grievance venting, is drawing more media attention than breast-beating by cultivators normally would. A group of 84 farmers are sitting in with eight skulls of farmers who killed themselves owing to farm losses.  They were presumably buried and not cremated. (Should not the dead be allowed to rest in peace?).  P Ayyakannu, who styles himself as the State President of the National-South India River Interlinking Agriculturist Association says they are protesting the national treatment of farmers as second-class citizens. He is a rice growing farmer from Trichy district with 20 acres. They have been at it since 14 March. They have met the agriculture, water resources and finance ministers. They say they will not return till their grievances are redressed.

Agriculture for smallholder farmers is not profitable. Ayyakannu believes the only solution is to connect the rivers so that as little water as possible drains into the sea.

Tamil Nadu and Puducherry are reeling under a drought. Southwest monsoon over the region was 19 percent in deficit in 2016. The region got 258.1 mm of rainfall between June and September last year against the normal of 317.2 mm. But the chief rainy season for this area is October to December when it gets rain from the northeast monsoon. In 2016, it was 62 percent in deficit over the region. This has prompted Chief Minister Edappadi K Palaniswami to announce a Rs 2,247 cr drought relief package, which is expected to benefit 32 lakh farmers. Many farmers have killed themselves.Their families are being given a compensation of Rs 3 lakh each. A crop loan write-off is also being contemplated.

Northeast monsoon has been quite erratic over Tamil Nadu and Puducherry over the past five years. In 2015 there was an excess of 52 percent. Chennai was under unprecedented floods. In 2014, there was an average excess of 2 percent. In 2013, it was 33 percent deficient. In 2012, northeast monsoon rainfall was 16 percent below the long period average. In 2011, it was 22 percent in excess.

Ayyakannu cites figures to prove there is little economic charm in agriculture. According to his association’s pamphlet, the monthly salary of a Tamil Nadu MLA was Rs 250 in 1970. In 2016, it was Rs 55,000 or 220 times more. Salaries of teachers in government schools have risen 200 times from Rs 120 to 24,000 a month during this period, it says. But the price of a 60 kg bag of paddy has risen only 22 times from Rs 40 to Rs 880 during this period. And that of a tonne of sugarcane has increased 25 times from Rs 90 to Rs 2,300.  Clearly, the terms of trade as compared to services are adverse.

But a proportionate increase in the prices of agricultural produce will price farmers out of the market. There will be consumer resistance as well. The farmers have not factored in productivity increases during this period which would have raised per acre farm incomes. But some of the gains would have been shaved by a rise in input costs.

It is true that farmers do not get their fair share because of government policies that revolve around subsidies (not investment) and urban consumers. When there is a glut, farmers are not protected from price slumps and when there is scarcity, imports are contracted, so that prices do not rise.

When weather fails the farmer, the government must step in with calamity relief. Price stabilization mechanisms have been talked about but are not effectively implemented. And while interlinking of rivers might have unintended adverse environmental consequences, the farmers are making a valid point: that irrigation facilities must be extended so that agriculture is largely insulated from the vagaries of the monsoons.

(Top photo: Skulls of farmers said to have committed suicide on display at Jantar Mantar. Photo by Vivian Fernandes).