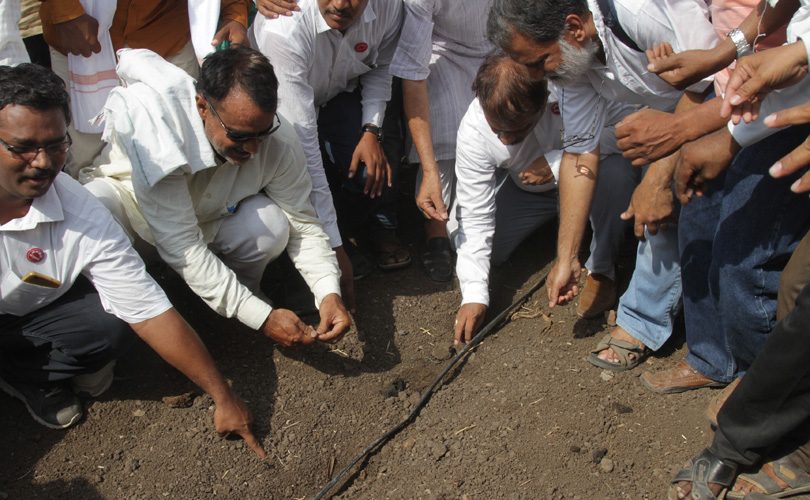 Vivian Fernandes was present at Akoli Jahangir village, in Akot near Akola in Maharashtra when about 2,000 farmers defined the law to plant herbicide-tolerant cottonseed stacked with the Bt trait, illegally.

The moment they were awaiting arrived at about 3 pm on Monday, 10 June. The chaotic crowd of farmers advanced on the field in waves, jabbing reddish-brown, fungicide-coated seed into black cotton soil along rows of drip pipes laid uniformly apart. These were moments to be captured on camera but the farmers were untrained in the art of the pose. As they surged the photographers retreated, their drives in high-speed continuous mode to catch raw-energy defiance of the law at 43 degrees Celsius. The slogans said why: 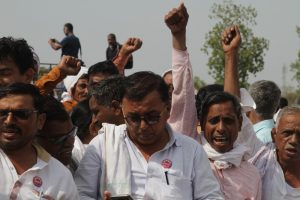 (Not by stealth, Bt by right)

(Technology freedom is our right, not anybody’s patrimony).

The 2,000 farmers had gathered at Akoli Jahangir village, about 50 km from the town of Akola in Maharashtra, to plant herbicide-tolerant (Ht) cotton that has not been approved for cultivation. But the pirated version of the genetically-modified (GM) cottonseed is extensively grown because it helps avert manual weeding. When sprayed with glyphosate, weeds die but not Ht cotton plants. By defying the law, the farmers were drawing inspiration from Gandhi’s Salt Satyagraha. It is doubtful whether Gandhi would have approved the purpose; he was not a votary of technology. But he would have applauded the spirit of rebellion for a just cause.

Lalit Patil Bahale had set aside two acres from his 38-acre farm for the event. A microbiologist, Bahale’s family is active in politics. His wife is a member of the zilla parishad. Bahale had stopped growing cotton about two decades ago, after persistently losing the crop to bollworms. He had turned to high-value horticulture instead. That was before 2002 when the government approved cottonseed laced with a protein obtained from the Bt soil bacterium which is toxic to bollworms. India now has the largest cotton area in the world under Bt cotton.

Bahale wants to assert farmers’ right to technology. According to him, by banning GM technology or stalling its release the government is encouraging lawlessness. “I am prepared for the consequences,” he says. 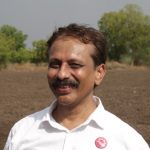 Anil Ghanvat, President of the Shetkari Sanghatana, which organized the event, calls the defiance of the law an act of civil disobedience. The farmers’ union founded by the late Sharad Joshi believes farmers are shackled by laws and policies that depress the value of agricultural land, suppress the prices of agri-commodities and deny them access to cost-saving and yield-enhancing modern agri-biotechnology which can make them more competitive in the world markets.  It is a message that finds resonance; farmers have traveled to the village from various parts of Maharashtra at their own expense.

“Why do we have to go by hook or crook?” asks Ghanvat. “This government has compelled us to be smugglers.”  He refers to the extensive illegal cultivation of Ht cotton in the country. The Delhi-based South Asia Biotechnology Centre (SABC) had estimated that 35 lakh packets of Ht cottonseed had been sold illegally in 2017. This was enough to cover about 6.8 lakh hectares or 6 percent of 11.4 million hectares planted with cotton that 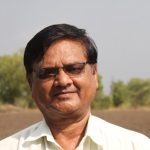 year.  In October 2017, the Andhra Government received a representation from farmers which sought legalization of Ht cotton on the grounds that the illegal variety was covering 15 percent of the state’s cotton area. Concerned about the development, the government set up a Field Inspection and Scientific Evaluation Committee to ascertain the spread of Ht cotton. It advised the crop to be destroyed. Not wishing to risk farmers’ anger states like Andhra Pradesh banned the sale of glyphosate instead.

Quite a few farmers at the venue had sown Ht cotton. GB of Amravati (who asked not to be named) said he had planted four of nine acres with Ht cotton. “I did not plant cotton for ten years because of difficulty in finding labourers for weeding,” he said.

Rajendra Thakare of Yawardi Karajha village in Washim district had planted all 10 acres with Ht cotton. He was returning to cotton after 18 years. He had been deterred by the shortage of labour.

Nitin Deshmukh of Watfali village in Ner taluka of Yavatmal district had planted eight acres with Ht cotton. He had obtained the seed from Gujarat.

Purushottam Dhote of Kapusthalni village in Amravati taluka had sown two acres with Ht cotton. When asked whether he could be quoted – and cautioned that he could be booked for violation of the Environment Protection Act – Dhote said, “Kalyankari (progressive) technology should be available to farmers,” he said. “This is our right. I will fight for it.”

The nub of the issue is the government’s lack of accountability on GM crops. If the technology developer has spent time and money complying with a procedure laid down by law can ministers deny or stall approval merely because they do not agree with the science or it does not suit their political interests? Who is responsible for losses caused to farmers from the denial of such technology?

In February 2010, environment minister Jairam Ramesh arbitrarily imposed an indefinite moratorium on the release of Bt brinjal for cultivation. He invented a procedure not prescribed by law ─ public hearings in various cities where shrill activists opposed to GM technology fanned fears about Bt brinjal, providing the minister with an excuse to act in the “public interest.”

In doing so Ramesh ignored the vote of 16 members of the Genetic Engineering Approval Committee (GEAC) and heeded the veto of just two of them. He dismissed the view of a high-level GEAC committee which had studied the objections of the anti-GM activists and found them to be without merit. He ignored the long history of safe use of Bt protein in various countries. He ignored the GEAC committee’s view that stomach acids degrade the Bt protein in 30 seconds, that it breaks down upon cooking and was not detectable even in short-term digestibility studies.

Yet a series of environment ministers after him – Jayanti Natarajan, Veerappa Moily, Prakash Javadekar, Anil Madhav Dave and Harsh Vardhan allowed the moratorium to continue. Brinjal spiked with Bt protein is deadly to the fruit and shoot borer; instead, farmers have been forced to douse brinjal with pesticides, which are ineffective 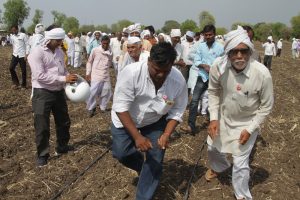 The surge to sow

once the borer block contact with them by lodging itself inside the brinjal fruit and stem.  This technology has been used in Bangladesh for the past three years and there have been no reports of any harm.

Another example is the GM mustard hybrid, DMH-11, developed by a team of Delhi University scientists with (public) funding from the National Dairy Development Board (NDDB) and the Department of Biotechnology. The research was first published in an international journal in 2001. Field trials began in 2002. After 15 years, in May 2017 the GEAC recommended it release for cultivation. But environment minister Anil Madhav Dave expired within days of the recommendation. Harsh Vardhan, who replaced him, sat on the file, reportedly because the Swadeshi Jagran Manch, one of 36 organizations affiliated to the Rashtriya Swayamsevak Sangh (RSS), is opposed to GM technology. The National Academy of Agricultural Sciences (NAAS) even wrote to the Prime Minister to allow the hybrid to be cultivated.

Pollen-flow studies on Ht cotton began in 2006. Between 2008 and 2012, two levels of bio-safety research studies were conducted. The dossier was presented to GEAC in 2013. But in August 2016, before it could be approved, the developer, Mahyco developed cold feet. It withdrew the application for commercial release of the cottonseed because agriculture minister Radha Mohan Singh had upended India’s intellectual property rights regime with curbs on royalty payments that hugely favoured domestic seed companies.  Mahyco reckoned that even if Ht cottonseed, combined with the insect-resistant Bt trait were released, it would not profit from it. 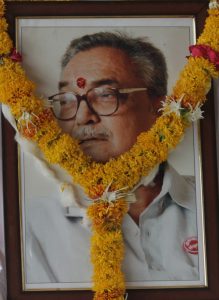 The Shetkari Sanghatana does not agree with Gandhi’s vision of self-contained villages but like him, it wants farmers to be self-reliant. “We see Gandhiji’s spectacles everywhere but not his vision,” said Pradyna Bapat, the Sanghatana’s leader from Yavatmal, aptly summing up the current situation.

(Top photo of Lalit Patil Bahale planting HTBt cotton at his farm in Akoli Jahagir, Akot, Akola.  All photos on this page by Vivian Fernandes).