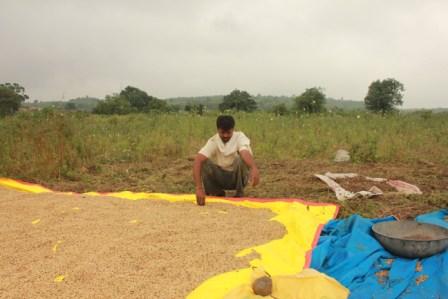 Those who allege an ‘agrarian crisis’ on the basis of suicides among farmers could ask themselves, ‘Is India facing a marital crisis as well?’ The national crime data shows more housewives killing themselves than farmers. In 2013, almost double the number of housewives (about 23,000) ended their lives compared to nearly 12,000 farmers. This was 16.9 percent and 8.7 percent respectively of 135,000 suicides in India. Over a ten-year period, analysed for this study, more housewives killed themselves than farmers. Attributing farmers’ suicide to any one crop (Bt cotton, as some spin masters in the media do) is like blaming Indian men for driving their spouses over the cliff, reports Vivian Fernandes in this report while calling upon journalists to be nuanced in their reporting.

Indebtedness is a key reason for farmers taking extreme action, and the failure of any crop provokes them to the point of no return. The picture above is that of Vijay Rathod, 32, of Bothbodan village, in Vidarbha’s Yavatmal

district, which is said to be prone to suicides. It was taken in October 2013 and shows the farmer, who owns six acres, along with two brothers, staring at a ruined crop of soyabean caused by late rains. He was worried stiff about repaying a loan of Rs 80,000. Moneylenders harass us, he said. That drives some of us to suicide.  Latterly, one has been hearing reports of farmers  in Uttar Pradesh killing themselves because of crops destroyed by freak rains.

Fear-mongering is a strategy that has been used by journalists and environmentalists of extreme Left persuasion to foist anti-science agendas on the public and force a reversal of liberalization policies. On 24 March, the UK charity, Oxfam, distanced itself from the misleading campaign of its Ugandan associate that banana plants genetically-modified to resist blight, which devastates the country’s staple crop, would harm human health. It told The Independent newspaper, which had done the Ugandan investigative report that warnings issued over at least sixteen months ‘should not have happened and have been stopped.’ Oxfam Uganda had told farmers that GM food caused tumours in rats.  The newspaper quoted the World Health Organization’s ruling that GM foods ‘have no effect on human health.’

The banana variety has been developed support from the Bill and Melinda Gates foundation. NGOs in the African country are opposing a law that would allow the variety to be commercially grown. Despite not a single peer-reviewed scientific study proving that GM foods pose health risks and millions of meals eaten since GM crops were commercially cultivated in 1996,  Oxfam said the health debate around GM foods is ‘highly contested’ and ‘context is everything’ while professing a neutral stance on the technology.

’How does context alter the composition of GM food and its implications for health? Context can make certain GM traits ineffective if ignorant or careless farmers do not follow protocol. For instance, if they do not grow a row of plants that boll worms can feed on around cotton crop that has been genetically-tweaked to kill them, over time the worms can develop resistance to the pest-killing gene.  But it cannot make GM cottonseed oil meal harmful to cattle.

Another NGO that has used terror to block the commercialization of GM crops is Greenpeace. In August 2013, its activists destroyed field trials of Golden Rice in the Philippines. The NGO has used imagery like the skull and crossbones to scare poor mothers away from beta carotene-fortified Golden Rice, when a bowl of the rice eaten daily can cure Vitamin A deficiency. According to the Helen Keller Institute (named after the world’s the first blind graduate) , which is evaluating the rice for its efficacy, a million children either die or go blind every year because of vitamin A deficiency.

Golden Rice was developed in Europe by two scientists in 1999 with a beta carotene gene from maize. The Manila-based International Rice Research Institute is now the lead researcher. It is supported by the Bill and Melinda Gates Foundation, the Rockefeller Foundation and the US Agency for International Development. No corporation has commercial interest in the rice as Syngenta which improved upon the rice has donated its material to IRRI and is pursuing it purely as a humanitarian project. But NGOs like Greenpeace do not relent for fear that their anti-GM stance will be questioned if they give in on one.

It is their blind opposition that has cost this country dear. Bt cotton, approved in 2002, has been wholeheartedly supported by farmers. It now covers 95 percent of cotton acreage. Production has tripled in twelve years to 39 million bales (of 170 kg) in 2013-14. From being an importer, India was until last year the second largest exporter. Cotton yield has nearly doubled, even though the Bt gene is a ‘protection’ gene and not a yield-enhancing ‘production’ gene. Reduced pest damage has been the cause. The share of cotton insecticides in total has declined from 46 percent before Bt cotton was introduced to 21 percent now. Farmer suicide per lakh of rural population is declining and has averaged 1.9 between 2003 and 2013, while the rate for the Indian population has averaged 10.8. People are driven to extreme action for various reasons. It is wrong to twist their distress to drive political agendas.

In 2012-13, Maharashtra had 4.1 million hectares under cotton. Nearly 3,800 farmers killed themselves in the state that year. Adjoining Gujarat had 2.5 million ha under cotton and the number of farmer suicides in the state that year was 564. The figures would not have been so disparate if the cause was the same. Ideologically driven journalists have blamed Bt cotton with scant evidence. This is as bad as paid news. ‘One would have expected the success (of Bt cotton) would have made it easier to introduce biotech in other crops,’ says a dismayed K K Narayanan, Managing Director of Metahelix Life Sciences, a Tata group company.

But most states have denied permission for field trials of crops with GM traits ‘Traditional agriculture is one of the biggest threats to biodiversity,’ says Ullas Karanth, a trained ecologist, who had done long-term studies on tigers and other large mammals. This correspondent got to see the damage that extremist NGO falsehoods do while on a rural journalism fellowship in 2013. The Gujarat government had initiated a programme of shifting tribal farmer from low-yielding, low-income white desi maize to high-output nutritious yellow hybrids by providing subsidized seed and fertilizer. Retired school teacher Gamanbhai of Vashiya village in Dahod district’s Jalod taluk said he had stopped using the seed supplied by one of two MNCs engaged by the government despite getting good output because ‘people said it causes cancer’ and depletes the soil. Another canard was that yellow maize would make one look ‘mongoloid’ by inducing mutation.

In an interview to The Independent, Hugh Grant, President & CEO of Monsanto, the $18 billion seed American company said it had reacted with ‘hubris and naivety’ to the consumer backlash against GM foods. While it did ‘cool science’ and remained within regulatory parameters its conversation with consumers was ‘abstract.’ He acknowledged a public trust deficit in corporations, especially American ones and called for the debate on GM food to be nuanced as his company and GM crops would have to be in the food chain with population estimated to increase from seven billion to nine billion in the coming decades.

Greenpeace India is exulting as the champion of tribals, which stands up to grabby corporates after the government banned its activist Priya Pillai from travelling abroad to testify before British MPs (against coal mining) , and banned it from receiving foreign funds (as a threat to economic security).  Its website claims it is the muzzled voice of the marginalized. The Delhi High Court has quashed the government orders. Liberal Indians will approve of the court action. But they should also ask whether negativism clothed in environmentalism helps development, and democracy is enhanced by the serial manufacture of dissent. To me such organisations are as helpful as those who prescribe eternal bachelorhood on Indian women as an antidote to lethal marital distress.

(This story was first published in www.firstpost.com).