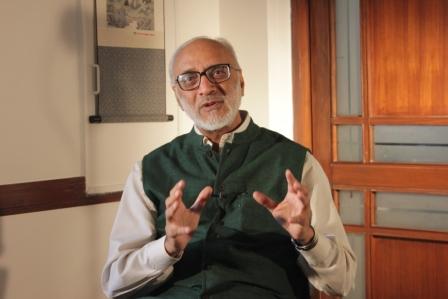 India will have to consider income insurance or income support for farmers, Ashok Gulati, former chairman of the Commission on Agricultural Costs and Prices tells Vivian Fernandes. It will be expensive, and land records in India are ill-maintained, but the problem cannot be left hanging.

Unseasonal rains that have destroyed crops and ruined farmers in some parts of the country cry out for an institutional system of risk management, says Ashok Gulati, former chairman of the Commission on Agricultural Cost and Prices.  ‘Our tentative conclusion is that nowhere in the world can farmers afford to pay the full premium,’ says the agricultural economist who is now with ICRIER, a Delhi-based research organisation.

Gulati says the premium will typically be about ten percent of the income to be insured. Farmers are not keen to pay because catastrophe strikes every few years; it is not an annual occurrence and their experience with existing government insurance schemes has not been happy.

Insurance is a formality to be complied with for a bank loan and not a truly risk mitigation device.  Agriculture insurance covered 203.7 million farmers over 26 crop seasons between 1999-00 and kharif 2012. They may not have done it out of choice. Only a fifth of those who took insurance during kharif 2012 were non-loanee farmers and almost all of them were from five states.The amount of compensation was quite meagre. The insurance regulator says 26 percent of insured farmers got claims worth Rs 24,361 cr settled. That comes to an average of Rs 5,000 each.  Still, the compensation pay out was three times the premium earned. Agriculture Minister Radha Mohan Singh told the Lok Sabha in 2014 that current insurance schemes have failed and the government is working on a new insurance scheme.

In most countries, the state subsidizes the cost to a large extent. This is better than loan waivers (nearly Rs 52,500cr in 2004) or ad hoc concessions which the Indian government doles out.  He estimates that the state may have to bear the cost to the extent of 70 percent. If the share of agriculture is 18 percent (14 percent under the old methodology) of a $2 trillion economy, the premium payable is going to be very large.

How about a per hectare payment by way of income support? ‘That would be a dream,’ says Gulati. ‘The US has moved forward in that direction.’ It takes care of both nature and market risks and is being criticized in the US for making agriculture risk free and cosseting large corporations. That criticism will not be valid in India where farmers are very small and at subsistence levels.  But the difficulty is in determining who the farmers are as proper lands records have not been maintained and the process of digitization is moving very slowly. Yet the problem will have to be solved; it cannot be left open-ended.

In the US, the base income is the moving average of three years, Gulati said. If income declines up to fifteen percent, no compensation will be paid; farmers will get support beyond that.

Gulati called for greater support for food processing and contract farming to iron out volatility in prices of perishable commodities like vegetables. In India, processing is subject to stiff taxation, on say, packaging and processed commodities are considered value added, when it is fresh produce that should bear premium pricing.  By tying up with farmers and offering to buy back produce at a fixed price, processors took care of the market risk, allowing them to focus on raising productivity. But governments were stuck in a 1960s socialist mindset, and some like that of West Bengal had not declared that attitude to contract farming. (see story on this website).

Water-rich eastern India from Lucknow to Assam was the ‘lowest hanging fruit for any government to pluck.’ A beginning has been with a programme called ‘Bringing Green Revolution to Eastern India.’ It was initiated by Pranab Mukherjee when he was finance minster. Gulati said the agricultural potential of these regions was not being fully tapped because there was no system of procurement. Rice farmers, for instance, were getting around 20 percent less than the minimum support prices.  As CACP chairman, he said, his ‘heart would break’ when farmers in Bihar asked him to ensure they got the floor prices. They would never clamour for an increase in MSP, unlike farmers in Punjab and Haryana. He wanted the Food Corporation of India to focus its procurement effort in these parts, so they could become the granaries of India like the two north-west Indian states.