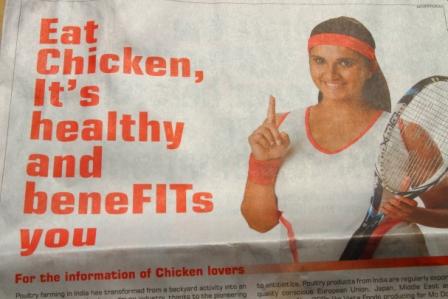 Antibiotic residue levels in Indian chicken are much below the maximum residue level (MRL) and therefore safe for consumption, says All India Poultry Development and Services in a full-page advertisement in the Times of India. The company belongs to the Venkateshwara Hatcheries group, set up by the late B V Rao, who pioneered India’s poultry industry.

The ad quotes a study done by the Delhi-based Centre for Science and Environment on chicken samples drawn from the National Capital Region. The table shows that actual levels of antibiotics like oxytetracycline, chlortetracycline, doxycycline, enrofloxacin and ciprofloxacin in chicken muscle, liver and kidney are much below their MRLs. For example, the actual level of oxytetracycline in chicken muscle was 8.45-13.60 micrograms (one-millionth of a gram) when the permitted MRL is 100 miccrograms. Ciprofloxacin in the liver of chicken samples was in the range of 7.55-64.59 micrograms when its permitted MRL is 200 micrograms.

The scaremongering is a conspiracy by suppliers from western countries who are keen to grab a share of the Indian market, the ad alleges. They “appear to be trying to spread false and misleading information regarding indiscriminate usage of antibiotics,” through “so-called NGO foundations,” it adds.

Explaining why antibiotics are used, the ad says animals grown for food need to be taken care of at times with therapeutic use of antimicrobials, suggesting thereby that they are not used to enhance body weight. India’s poultry sector, it says, is prudent and ensures appropriate use of antimicrobials in the required dosages and well before slaughter.

According to the ad, the Indian poultry industry is using prebiotics, probiotics, phytogenic additives, acidifiers and immune stimulants as alternatives to antiobiotics. Indian poultry products are exported to the European Union, West Asia, Japan and East Asia. Indian quick service restaurant chains also source their requirements of chicken from within the country. This, in the view of the industry, proves that hygiene and quality standards are maintained.

The ad claims that India is the least cost producer of chicken and eggs. It ranks second in the world in egg production and fourth in chicken meat production. But India’s use of antimicrobials is just 3 percent of the global consumption for animal usage, against 23 percent in China, 36 percent in the United States and 9 percent in Brazil. This information is attributed to the government’s National Action Plan on Microbial Resistance.

India’s poultry industry, the ad says, is driven by technology and scientific management. It has high productivity levels. In fact, much of the production in India is through franchisees, where poultry companies like Venkateshara Hatcheries and Suguna supply chicks, feed and other growth requirements to poultry farmers on an assured buy-back basis, while compensating them for land and labour including day-to-day management.

(Top photo: Advertisement issues by All India Poultry Development and Services Private Limited in the 26th February edition of the Times of India. By Vivian Fernandes).