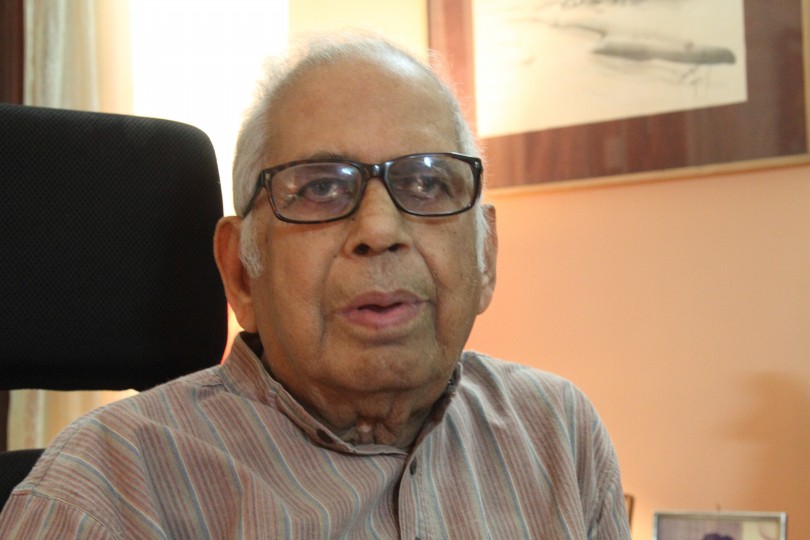 Pushpa Mittra Bhargava, founder of the Centre for Cellular and Molecular Biology (CCMB) died in Hyderabad aged 89. VivianFernandes interviewed him in January. Despite being on dialysis and wheel-chair bound, Bhargava was a man of great energy and drive. He was a compulsive talker. During the interview he gagged because of a throat procedure he had undergone. But that did not prevent him from forcefully making his point.

I called up Pushpa Bhargava at about 6 pm on 16 January, seeking an appointment. I was curious to know why he was so opposed to genetic modification of crops. Bhargava told me to come right away as he was going to be on dialysis the next day. He said he was one of about two dozen kidney trouble patients in India to have dialysers at home. He was living at the other end of town. He gave me elaborate instructions on how to reach there  and handle the electronic security device  at the entrance. I braved the peak Hyderabad traffic and reached his house, which is a multi-storey building named after his wife Manorama, after about two hours.

Bhargava liked to speak and it was mostly about himself. He set up the Centre for Cellular and Molecular Biology (CCMB) in Hyderabad.  He claimed to have coined the term “biotechnology,” in a concept note on the centre. In an obituary, the Times of India called him a pioneer in the field of biotechnology.  hen I prefaced a question with “You are a biotechnologist” he angrily retorted: “To call someone like me a biotechnologist is an insult.”  He was a  “modern biologist”  who hadn’t “had one single formal lesson in biology. I have never learnt biology. The world knows me as a biologist.”  Bhargava had high esteem for his intellect.

Why was he opposed to Bt cotton, which is genetically modified with a protein derived from a soil bacterium to be poisonous to bollworms?  Before he answered that, he claimed patent rights on “genetic engineering.” He had coined the term, he said.  He was not opposed to the insertion of transgenes.  He was among “the first to say you should put foreign genes into plant and animal cells,” suffixing the statement with a slight bow of humility “if I may say so.” And then another claim on greatness: “Our lab at CCMB was one of the first to start work on this.”

But when the technology was developed by “a close friend of mine” Paul Berg “we were very scared.” Berg was awarded the Nobel Prize for Chemistry in 1980.   At the 1975 Asilomar conference in California, where hazards and regulation of biotechnology were discussed, it was decided that toxic genes should not be put in living organisms.  Bhargava cited that as a reason for opposing Bt cotton.

But further into the interview it turned out that Bhargava’s opposition had more to do with hurt vanity than noble principle.

Monsanto, the American leader in agri-biotechnology, he said,  had offered Bt cotton technology to the Department of Biotechnology (DBT) set up by Prime Minister Rajiv Gandhi “at my suggestion.”  (Bhargava said he was offered the position of secretary, but he laid conditions which the government did not accept). Chittaranjan R Bhatia, who was DBT secretary from 1993 to 1995,  said Monsanto wanted Rs 63 cr for the technology.

“I said this is ridiculous.  I was the chairman of the only Indian biotechnology company, Avesthagen, set up by Villoo (Morawala) Patell. I said, ‘Look, Avesthagen will do it for you for Rs 3 cr. Why spend Rs 63 cr?’” Monsanto, according to Bhargava, brought down the price to Rs 32 cr.  But Bhargava believed the technology could be developed domestically for Rs 3 cr. The deal never went through.

So Bhargava was not actually opposed to putting a toxic gene in a living organism; he was opposed to somebody else doing it for what he considered a fat price.

Bhargava then went on to make charges against DBT Secretary Manju Sharma during whose tenure Bt cotton, developed by Mahyco-Monsanto, got approval for commercial cultivation in 2002. Critics say Monsanto has profited immensely from the technology in the past 15 years. They should thank Bhargava,  who by his own admission, had stopped  the country getting the technology at a fraction of the price it is paying now as royalties.

That obstructive role has continued. Bhargava had a role in depriving Indian farmers of Bt brinjal technology. Bangladeshi farmers are profiting from it.

Despite being frail and unable to move without a wheelchair,  Bhargava was on the dais at a  seminar organized by the RSS affiliate Swadeshi Jagran Manch against genetically-modified mustard last September.Unlike Bt cotton, the GM mustard hybrid, DMH-11, which the Genetic Engineering Appraisal Committee recommended for cultivation in March, does not contain any toxic genes.

When asked how he could square his protest against “intolerance” in December 2015  and offer to return the Padma Bhushan with the embrace of the SJM, he said he had offered only issue-based support. At one time he was called a Communist he said, because he had named his son after Mohit Sen, a communist leader. “On the whole I find this government is backward looking, but if it does something good, I will be the first to say it is doing good.”

Bhargava was a member of the Technical Expert Committee appointed by the Supreme Court to advice it on GM crops. He called for a ban on GM crop technology along with four other members. Only the sixth, R S Paroda, an agricultural scientist, dissented.

Most anti-GM activists have little knowledge of the science. Their opposition can be dismissed. But Bhargava’s voice gave their shrillness the veneer of respectability. He has done much to discredit the technology and deny choice of good seed to farmers.

(This article was first published in the Financial Express)