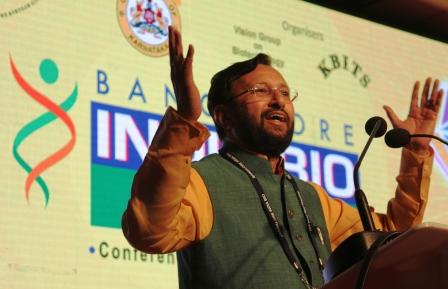 Will Karnataka allow field trials of GM crops? The audience was not wiser after the Bangalore India Bio event, reports Vivian Fernandes.

The Bangalore India Bio organized by the Karnataka government in association with industry is the country’s biggest biotechnology event. This year’s show, the fifteenth, between 9 and 11 February had Britain flaunting its stuff in the medicinal and healthcare areas. The opening ceremony was a grand spectacle. The showmanship of Srivatsa Krishna, the state’s secretary for information technology, biotechnology and science & technology (IT,BT, S&T) was flawless.  To a rousing countdown of twelve power points — the only state with a dedicated policy and department, a venture fund of Rs 50 cr, the country’s largest pool of relevant professionals , etc — he plugged Bengaluru’s first claim on biotechnology investments.  The jazz and dazzle culminated in a drone descending in front of Chief Minister

Siddaramaiah (he uses no initials or surname) for him to declare open by remote control a 60,000 sq ft instrumentation facility, leasable in bite-sized units. But the official tone was less-than encouraging to the agro-biotech industry which was seeking a reassurance on field trials of genetically-modified crops, which have been vilified by environmentalists and Leftists. Ram Kaundinya, the director-general of the agriculture focus group of the Association of (thirteen) Biotech-led Enterprises (Able-AG), said the meter was ticking away on Rs 12,000 cr of investments made by the country’s public and private sectors, as no new GM crop had been approved for commercial cultivation after Bt cotton in 2002 because former environment minister Jairam Ramesh had suspended field trials in 2010  for ‘unscientific reasons’ and made the non-objection of states for conducting them mandatory. The 2014 cotton output of 40 million bales (170 kg) was thanks to GM technology, he asserted. Production of genetically-tweaked mustard, pulses and rice could take off similarly. Karnataka should follow Andhra Pradesh, Maharashtra, Punjab and Delhi, in allowing field trials, he urged. Union minister for environmment Prakash Javadekar (pictured at the top) made made no mention of GM crop trials given the political sensitivity of the subject, though he in private he was supportive. Kiran Mazumdar Shaw, CMD of Biocon and the force behind the event leaned in favour. K K Narayanan, MD of Metahelix Life Sciences, a Tata group

company, lamented that the ‘great success’ of Bt cotton had not eased the deployment of GM technology in other crops.  ‘We need strong regulation which is sound but not stifling,’ he said.  Mexico-based Sanjaya Rajaram, the 2014 World Food Prize laureate, a plant breeder whose team has produced over 200 wheat varieties grown in 51 countries, warned ‘India has gone complacent.’ Unlike Brazil, Africa and Indonesia, which could clear forests (though inadvisable for climate change reasons), India did not have the luxury of spare land. ‘Indian legislation should not be guided by European Parliaments (opposed to the technology),’ he cautioned. ‘My strong plea is that we not only embrace agricultural biotech but through legislation produce the correct technology packages at a cheaper rate. India’s small farmers need help.’ S R Patil, the sauve minister for IT,BT and S&T was comforting. ‘We will allow field trials in agri-biotech,’ he declared at the inaugural because Karnataka wants to be a name in the field.  But Krishna Byre Gowda, the young and US educated agriculture minister, wrung his hands. GM is controversial, he said. Because of the stand taken by the EU against GM crops (never mind that Spain has 130,000 ha under GM maize), ‘it has become difficult for us.’   There is ‘so much pressure from the left and the right.’   ‘A responsible government cannot ignore the opinion of larger society.’ S&T Secretary Krishna acknowledged that the global agri-biotech market was large and growing and India could not withdraw from it.  Rather than help suggest how industry could assuage public concerns and get more GM crops cultivated, he cited that morning’s newspaper article by former environment minister Jairam Ramesh. February

10 being the fifth anniversary of the moratorium on commercial cultivation of Bt brinjal which Ramesh had imposed as minister, the article was self-justificatory in tone. Ramesh sought comfort in numbers. Not one of the thirty states was willing to approve Bt brinjal, he wrote (though their approval was not required at that time) and at least four states have allowed field trials now. Ramesh had embarked on a novel process of street corner consultations, where (intolerant, as he called them) environmental storm troopers had been let loose on (‘arrogant’ as he put it) scientists. If ‘public officials and public representatives’ countrywide were not in support, the crop biotech industry must turn the searchlight inwards, Krishna said. ‘Ask questions, keep drillling till you can ask no more,’ he urged the audience, citing the advice of his doctoral research guide (a Nobel laureate).  When M Mahadevappa interrupted him to ask whether a quick decision on the report of the state’s expert group on agricultural biotechnology was likely, Krishna said there would be ‘movement on its own. It would be a political decision and it could go in either direction’.  Mahadevappa had headed the the state’s expert group on biotechnology and is former vice chancellor of the University of Agricultural Sciences, Dharwad. The group has give been in favour of GM crops. Ullas Karanth was caustic at the attempt to pass off vacillation as wise policy making. A wildlife conservationist and tiger specialist Karanth asserted that GM technology was more protective of biodiversity than traditional agriculture. There were risks; those had to be managed. Europe could do non-GM agriculture because it can afford benign but expensive next-gen pesticides. All the national science academies have endorsed GM crop technology, he said. Just because some people were saying that the technology was bad, did not mean that ‘decision-makers have to balance science versus nonsense.’ Reason and weighted science must prevail. But he inserted a caveat. GM technology should not be seen as a tool in the hands of large corporations because they have a tendency to influence governments for the common detriment. Corporates engaged in agri-biotechnology must conduct themselves with integrity and the regulatory mechanism should be fair and transparent