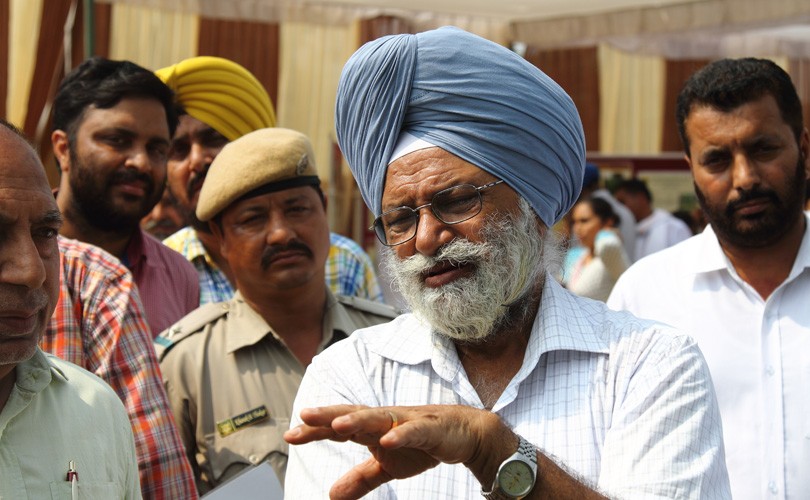 After last year’s devastating infestation of whitefly on cotton, Punjab farmers have reduced area under the crop. Vivian Fernandes caught up with Punjab Agricultural University’s Vice-chancellor Baldev Singh Dhillon at its farmers’ mela in Bhatinda on 29 September to find out whether whitefly continues to be a menace and how it is being controlled.

After last year’s devastating attack of whitefly on cotton in Punjab, are farmers shifting out of the crop?
I would say this is a temporary phase.  Because of the very serious incidence of whitefly last year, yield declined from Rs 450 kg of lint per hectare to 197 kg. So naturally area was expected to decline and it declined from 3.39 lakh ha to 2.56 lakh.

Farmers at a mela in Bhatinda. Many of them in the picture grow rice and wheat. Cotton farmers suffered huge losses to whitefly last year. Photo by Vivian Fernandes.

Has white fly become endemic to Punjab? Can we control it?
We have controlled this time. When there is an epidemic of an insect, parasites which are dependent on that insect also multiply. So there is some natural control and farmers, the university and the department of agriculture also become active.  Sometime it takes one year, sometime the epidemic lasts two to three years.

This time the incidence of white fly was more isn’t it?

The incidence in the beginning was more because we had a mild winter. The population of whitefly was two to three times higher in May and June. Then it declined. Last year the government of Haryana constituted a joint committee of Punjab, Haryana and Rajasthan to prepare a plan how to control it. I was the chairman of the committee. This year the Punjab government constituted a committee to monitor implementation of that plan. Again I was the chairman. As per the recommendations of the first committee, the Punjab government started action in February itself for clean cultivation. Alternative hosts, particularly weeds it started removing. That was the first and very important step. Secondly, there was timely supply of canal water for timely sowing. Except for three minor canals with little area, everywhere the water came in time and the sowing was done in time. These are two major factors. The government was also strict about seeds. It made a list of 38 Bt hybrids which are better performing. We monitored the quality of pesticides and seeds – we and the department of agriculture. It was a multi-pronged effort. So we were able to control it.

Since American cotton hybrids are more susceptible to whitefly, do you think farmers should move to desi cotton? Is the University promoting desi cotton?
First of all there was too much expectation from Bt cotton. The expectation in general was probably Bt cotton has resistance to all insects, which is not correct. It carries resistance only to one kind of pest, that is bollworms. So when one pest goes down other pests are going to rise. Bt cotton hybrids (which are American cotton) do not have hair on leaves so sucking pests increased. This is why whitefly became a menace.

Coming to desi cotton, yes we want to promote it and desi cotton is a little more tolerant than American cotton to whitefly. We have very good varieties of desi cotton. We also have non-Bt varieties which are very good. And we are doing demonstration of them too.  Because the population of American bollworm has gone down tremendously maybe with a few sprays we will be able to manage bollworm in non-Bt varieties. We have excellent material.
We are working extensively on agronomy of cotton. Spraying is very, very important. Probably with lesser number of plants we will be able to do better spraying and control insects. Maybe yields will be 50 kg to 1 quintal less. But stability over the year might be higher. We have started large scale experiments in this respect.

Because of the whitefly menace last year, collaboration between Punjab, Haryana and Rajasthan has increased. In both the committees we had representatives from the three states. At the national level we have the all India coordinated cotton project. North zone cotton cultivation is quite different from central and south India. For example, we sow two months earlier than central India. So everything is different. In central India there is a problem of pink bollworm. We do not have that problem.

What prospect do you see for long-staple desi cotton on which trials are happening at PAU’s research station in Faridkot?
It will all depends on the market. We have good material in desi cotton. It will depend on the marketing. Desi cotton has tolerance to almost all the insect pests and many diseases too. But the disadvantage is that initially it is more susceptible to hot weather, because it is sown a little earlier. There is also too much boll shedding. We are working on these.

Your views on GM mustard, Sir ?
We should not see GM as a group. We should see first of all from where gene is coming from. Is it coming from a nearby plant? Take Vitamin A. We can transfer Vitamin A genes from maize to rice. Take the example of yellow rust. For resistance, we can transfer genes from rice to wheat. Agro-bacteria are used (in Bt cotton and GM mustard) because genome size is smaller. So we started with bacteria. Second, what is the effect on production, enzymes. Cry1Ac produces something which is toxic (to bollworms). There are other genes which make a product nutritious. Then there are ethical issues too. If you bring genes from animal kingdom, Jains may object as they are extreme type of vegetarians. We should analyse pros and cons of each and every GM product. We should not put everything in one basket. It also depends on our requirement. If we are able to get non-GM food, fine. But if the population grows as at present, then probably we will have to resort to GM. But we definitely have to select the crops in a systematic manner.

What is your stand, briefly?
Either we control our needs or we will have to grow GM food.