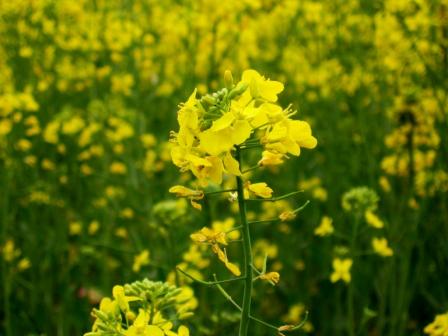 Trials of genetically-modified mustard in Delhi suggest a thaw in the government’s attitude towards the technology, says this report. But will field trials be followed by approval for cultivation by farmers?

On a fenced plot not far from Indian Prime Minister Narendra Modi’s home, a field of mustard is in full yellow bloom, representing his government’s reversal of an effective ban on field trials of genetically modified (GM) food crops.

The GM mustard planted in the half-acre field in the grounds of the Indian Agricultural Research Institute in New Delhi is in the final stage of trials before the variety is allowed to be sold commercially, and that could come within two years, scientists associated with the project say.

India placed a moratorium on GM aubergine in 2010 fearing the effect on food safety and biodiversity. Field trials of other GM crops were not formally halted, but the regulatory system was brought to a deadlock.

But allowing GM crops is critical to Modi’s goal of boosting dismal farm productivity in India, where urbanization is devouring arable land and population growth will mean there are 1.5 billion mouths to feed by 2030 – more even than China.

To go to the Bloomberg story published on cnbc.com click here.

This website had earlier posted a story of GM mustard based on an interview with its author Dr Deepak Pental. It was published in the Financial Express as India’s Myopia on GM Mustard.