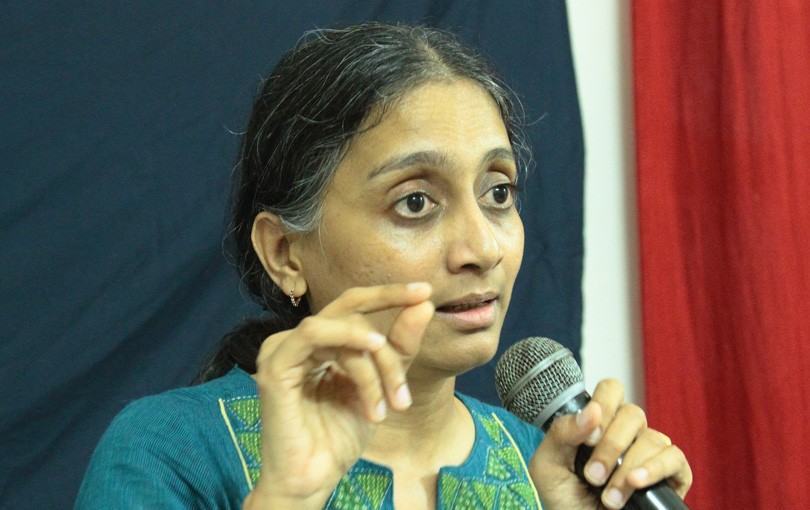 Anti-GM mustard activists walked out of a meeting called by the regulator for GM crops because they wanted two hours to make their point. They could have given written submissions after speaking briefly but chose not to. Vivian Fernandes reports on the press conference that followed.

Members of a coalition of groups opposed to genetically-modified (GM)  crops walked out of a meeting called by the Genetic Engineering Appraisal Committee (GEAC) today (20 June),  because they wanted two hours to present their views on GM mustard instead of 30 minutes given to them, which itself was a relaxation from the 10 minutes initially allocated.

Kavita Kuruganti, who heads the Coalition for GMO Free India, held a press conference in which she and six others who had accompanied her, trashed GM mustard for one-and-a-half hours. In a press release they demanded the ‘immediate rejection’ of the application for commercial cultivation of (Dhara Mustard Hybrid -11) or DMH-11 as the hybrid is called,  ‘scrapping of GEAC and RCGM’ or the Review Committee for Genetic Manipulation, which they said were ridden with conflicts of interest and served the interests of agri-business corporations. They wanted these regulators punished for failing to conduct proper ‘bio-safety assessment,’ and being willing to compromise human health and the interests of Indian farmers.

When a correspondent asked whether the coalition would approve of GM crops if the tests, data and analysis were found to be in order, Kuruganti said ‘Yes,’ but only as the last resort after other options had been exhausted (which meant never). They questioned the need for DMH-11, when, in their view, better non-GM mustard hybrids were available and did not deem necessary for the choice to the left to farmers.

The developers are seeking approval for DMH-11 because they claims it is up to 30 percent more productive than varieties and hybrids currently available. The activists said DMH-11 shone by contrast because its yield was being compared with Varuna, a low-yielding variety, which farmers did not prefer. It should have been compared with Kranti, they said.  But a person in the know, who did not wish to be named, said Varuna ‘is the most respected variety’ produced in the last 30-40 years. He said it is was ‘mega variety’ and the most preferred. Very few farmers, he said, grew Kranti, because matures four or five days late.

The activists said the pollen from DMH-11, which has been modified with bacterial genes to induce male sterility to aid hybridization, would contaminate neighbouring mustard crops. A geneticist agreed that some contamination would happen, but 79 percent of mustard farmers replaced their seeds every year, and these seeds were grown in controlled conditions, so there would not be ‘much damage.’

Kuruganti said the trials were not independent and the GEAC had relied on data supplied by Deepak Pental, geneticist and former vice chancellor of Delhi University, the developer of DMH-11. When we checked with Pental, he said there was ‘no interference from our part’ and ‘all tests were done by ICAR (Indian Council of Agricultural Research.’

Kuruganti and her colleagues wanted ‘independent scientists’ to evaluate the data. When asked who they might be, anti-GM activist Debal Deb, said to be an expert in agricultural biodiversity, mentioned Pushpa Bhagava, founder of Hyderabad’s Centre for Cellular and Molecular Biology, known for his opposition to GM crops. Bhargava is mentioned ─ we cannot vouch for the veracity ─ as one of the scientists who influenced environment minister Jairam Ramesh to veto the commercialization of Bt brinjal in 2010.

Deb said one of the outside genes spliced into DMH-11 would make it tolerant to the herbicide glufosinate. He said the herbicide was banned but was being extensively used in tea gardens. He called DMH-11 a ‘trojan horse’ for promotion of sales of the herbicide just as herbicide-tolerant Bt cotton was helping sales of glyphosate. When told that India has not approved herbicide tolerant Bt cotton, Kuruganti said ‘tens of thousands of hectares’ were being planted with it. (Some farmers are planting pirated seeds as they cannot afford the cost of manual weeding but some of those that had planted it have come to grief as the hybrids are susceptible to pests and diseases. For story on illegal planting of herbicide tolerant Bt cotton click here)

Yudvir Singh,another anti-GM activist, said India was (allegedly) importing only three percent of its cooking oil needs in 1997. But lower import duties that allowed palm oil to be cheaply imported from Malaysia and Indonesia had put domestic cultivators of oilseeds out of the market. If duties were increased, imports would reduce, he said.

When told that there was the interest of consumers to be considered and India could not protect farmers with duties as high as 70 percent as at one time, Kuruganti said, there should be ‘fair trade.’ But what is fair to one set of citizens can be quite unfair to another set.

Singh asserted that India’s only GM crop approved for cultivation so far, that is, Bt cotton has failed. This is not true. More than 95 percent of Indian cotton acreage is Bt cotton. Farmers pay Rs 800 (the price fixed by the central government) for 450 grams of the seed, when desi seeds are being sold by an NGO nominated by the Central Institute of Cotton Research for Rs 200 a kg. The pink bollworm has developed resistance to Bt cotton which is supposed to kill it, in some pockets, but the situation is not uncontrollable.

Singh also alleged that the GEAC  had not consulted farmers. In fact, it had a meeting with farmer leaders from Andhra, Maharashtra and Rajasthan just before the anti-GM coalition was scheduled to speak.

Actually, the government must make up its mind. It is being pusillanimous. This has a lot to do with ruling party politics. Sangh Parivar affiliates like the Swadeshi Jagran Manch and the Bharatiya Kisan Sangh are opposed to ‘alien’ GM technology, though DMH-11, is entirely Indian, funded as it was by the National Dairy Development Board and Delhi University. GEAC should have put out a decision document in the public domain, inviting informed objections from the public – and answering them – the last step before approval or disapproval for commercial cultivation. With the GEAC dithering, anti-GM activists are having a field day, portraying DMH-11 as being on shaky bio-safety data.