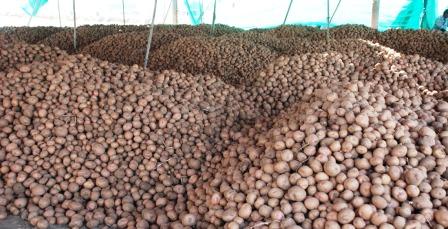 If farmers wants to get the maximum out of a crop they must respect its rhythms and give it just what it wants when it wants it. The Canadian company McCain is helping the potato farmers of Banaskantha do this in a relationship of shared prosperity, with government playing facilitator, reports Vivian Fernandes.

Parthi Chaudhary is a police official with the Anti-Corruption Bureau posted at Mehsana in Gujarat. He is in the news for busting records not scams. Three years ago, Chaudhary picked 87.188 tons of potatoes a hectare from his farm in Palanpur, the headquarters of Banaskantha district. The event, he says, was witnessed by a team put together by the collector, including agriculture experts from nearby Dantiwada University. The buzz in this part of country is that it is a world record, though a Google search throws up  another claimant, from Bihar, who is said to have harvested 108.8 tons of potato earlier this year, unbelievably, though organic farming. India’s best average yield, from Gujarat and Punjab, is 26 tons a hectare. Chaudhary treats his 90-acre farm as nature’s manufactory. For him agriculture is an industrial activity which can be broken up into discrete processes that play on the aspects that aid growth and tamp down those that do not to coax out the best that a crop can give.  His employees are partners in the venture: they get a share of the produce under the prevalent practice of bhagidhari (sharing). To win them over to his management style, Chaudhary has devised a matrix of 100 points. A score of 70 plus gets a bonus; below 50 percent earns a penalty. So far there have been only winners. We are discussing Lady Rosetta at the Rajpath Club in Ahmedabad. It is a variety, high in solids and low in sugar, and named after its bashful skin.  Chaudhary brings to the conversation the same measured manner that he deploys on his field.  His cultivated lady is for Chandhubhai Popatbhai Virani of Rajkot’s Balaji Wafers. PepsiCo is also a suitor. (For fries the varieties are long, not round, like Innovator and Kennebec). The yield this year was 67 tons a ton. Chaudhary says he has 1,400

Harvesting in progress in Parthibhai’s farm.

(Reporting for this story was done at end of May 2013)